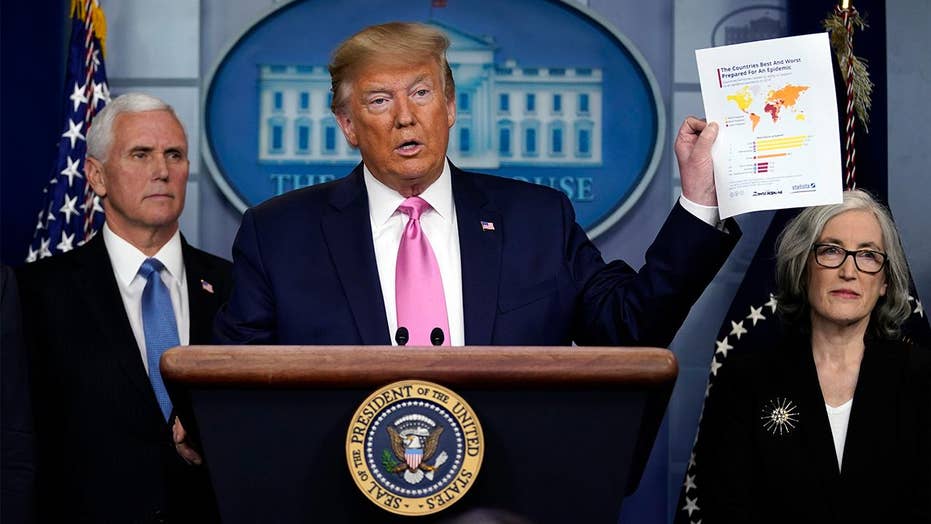 FEMA could take over coronavirus task force by late May, early June: Report

FOX Business' Cheryl Casone says the coronavirus task force will begin to scale back and ultimately be dismantled over the next few weeks.

For the first time in history, all 50 states, five territories and the District of Columbia are under a major disaster declaration at the same time. This is unprecedented, but the COVID-19 outbreak is in many ways an unprecedented emergency, and it calls for an unprecedented response.

Under President Trump, the federal government is laser-focused on helping Americans fight and recover from this pandemic.

One of the key problems that the Trump administration has faced during this crisis is that many overseas manufacturers and suppliers have shut down operations in order to comply with stay-at-home orders issued in their own countries.

MCCARTHY ON PUSH TO BRING SUPPLY CHAIN BACK TO US: 'WHY WOULD WE EVER PUT OURSELVES IN THIS PLACE AGAIN?'

Recognizing that the Strategic National Stockpile alone could not sustain all state, tribal and territorial requirements, President Trump has put the full weight of the federal government and the full weight of American industry into filling the gap.

The president declared a national emergency, allowing for deregulation to seed innovation, and he has employed the Defense Production Act to ramp up manufacturing efforts in the U.S. and mitigate supply shortages from abroad.

President Trump also formed the Supply Chain Task Force to increase the flow of medical supplies and equipment to health care workers on the front line.

Through the Federal Emergency Management Agency’s National Response Coordination Center, the task force is finding critical resources to meet urgent demand, as well as increase the overall level of surge support to “hot spots” as they arise.

The Supply Chain Task Force immediately began executing a strategy to maximize the availability of personal protective equipment (PPE) and other vital resources needed for our nation’s whole-of-America response.

The team applied a four-pronged approach of preservation, acceleration, expansion and allocation to rapidly increase supply today and expand domestic production of critical resources to increase supply for tomorrow.

Preservation focuses on providing federal guidance to first responders in public service energy distributors and the food industry, helping them learn how to safely preserve supplies when possible.

We are following guidance from the Centers for Disease Control and Prevention to help PPE last longer and are collaborating with our partners to help them get more out of the supplies they have on hand.

Preservation reduces the impact on the medical supply chain and maximizes existing PPE to protect doctors, nurses and other health care workers.

Acceleration provides direct results to help meet the demand for PPE through the private sector to help health care workers and responders get supplies they need as quickly as possible.

By working directly with some of the largest commercial distributors that already service the medical industry, we have helped them quickly move inventory through their normal distribution channels to resupply hospitals and other priority locations.

There is no greater example of acceleration than Project Airbridge. We created Project Airbridge to reduce the amount of time it takes to get commercially sourced and procured supplies from the global market to places in the U.S. with the greatest needs.

What normally takes up to 37 days in routine shipping was reduced to less than two days using airplanes chartered by FEMA.

Through expansion efforts following President Trump’s invocation of the Defense Production Act, we are generating capacity with both traditional and non-traditional manufacturers by adding machinery or reconfiguring assembly lines to produce new products to increase the private sector’s production capacity.

At the same time, the interagency Unified Coordination Group is using data to make informed decisions regarding allocation of supplies.

Through our public-private partnership, we’ve managed to gather distribution data from the six major national PPE distributors. We have used that data with a visualization tool that shows us what is coming in and where it is going – down to the ZIP code.

The tool also gives us the ability to prioritize hospitals, nursing homes and other health care facilities with the most critical needs and highest COVID-19 rates.

This is truly a historic effort. No one has ever before had this level of centralized visibility on an estimated 80 to 90 percent of the nation’s PPE supply chain.

What was initially estimated to take anywhere from six to nine months has been accomplished in the span of about two weeks. The result is a data-informed process that helps us ensure the right supplies are getting to the right places at the right time.

We are continuing to partner with nations around the globe for supplies. This administration will keep bringing those supplies into the U.S. as quickly as possible, expanding the market for the future, and continuing to make data-driven decisions to get supplies to the areas that need them most.

The challenge is unprecedented. But from the Trump administration’s task forces and agencies, to our nation’s hospitals, health care workers, manufacturers, shippers and grocers, we are meeting the challenge with an unprecedented response.