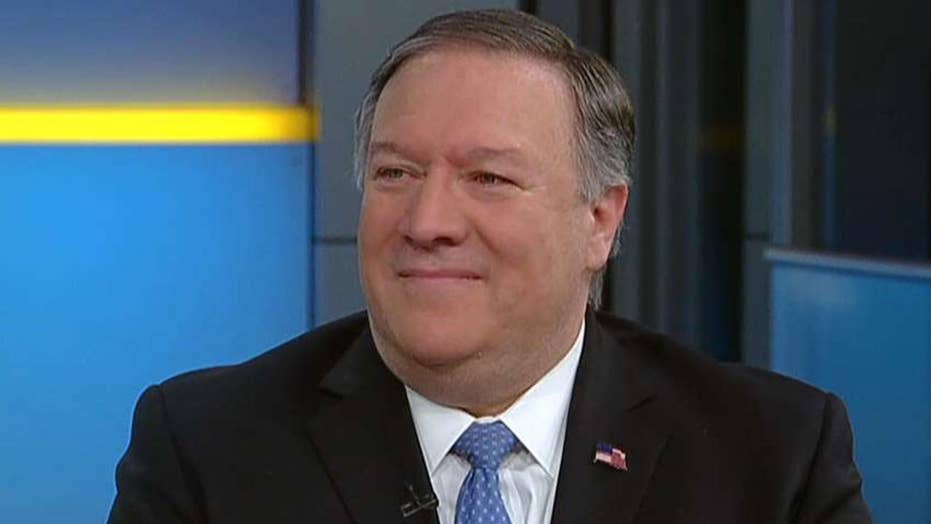 Secretary of State Mike Pompeo sits down with 'Fox &amp; Friends' to discuss working with Mexico and Central American countries to stop the flow of drugs and migrants into the U.S. and explains how the Trump administration wants to help bring democracy to Venezuela.

Secretary of State Mike Pompeo is headed to South America again. He sets off Thursday on a four-day tour that will take him to Chile, Paraguay, Peru, and Colombia. It will be Pompeo’s sixth trip to Latin America in less than a year in office.

What’s atop his agenda this time? Ramping up hemispheric efforts against Venezuela’s dictator Nicolas Maduro in support of interim President Juan Guaido.

Venezuela’s humanitarian and political crisis is the worst in the history of the Western Hemisphere. Millions of Venezuelans have fled the country. Those remaining live in dire conditions.

The four countries Pompeo will visit this week are leading international efforts against Maduro’s dictatorship. In the history of Latin America, this sort of cooperation and consensus is unprecedented.

There is symbolism attached to the trip as well. Three of the four countries — Chile, Paraguay, and Peru — have known oppression firsthand. All were formerly governed by dictatorships and are now democracies. The State Department is highlighting how their democratic transitions can serve as an example for a post-Maduro Venezuela.

Chile today can boast of being Latin America’s most prosperous nation, based on per capita income. This year marks the 30th year anniversary of the plebiscite that started Chile’s transition to democracy. And relations between Chile and the U.S. are growing stronger. The administration of President Sebastian Pinera is steadily deepening its cooperation with the U.S. on a variety of security, science, and trade issues.

Paraguay is a dynamic example of a small country punching above its weight. This landlocked South American nation has overcome a history of political instability and dictatorships and is now emerging as a free-market-oriented democracy. It has also maintained diplomatic relations with two key countries, Israel and Taiwan. Pompeo’s trip marks the first time a U.S. secretary of state has visited the country since 1965. The March 2018 visit by Assistant Secretary of State for Western Hemisphere Affairs Kimberly Breier was historic as well.

Peru suffered through decades of military and authoritarian rule, yet the last two decades have seen an emergence of stable, democratic governance. After more than a generation of armed conflict with the narco-communist Shining Path insurgency, the fighting has finally calmed down. Peru is now making substantial progress in taming its security and cocaine production challenges.

The final stop on Pompeo’s trip is Cucuta, Colombia. This border town is the primary crossing point for Venezuelans fleeing Maduro’s dictatorship. Since 2015, over 3 million Venezuelans have left their country. Nearly 2 million have resettled in Colombia, while 700,000 have resettled in Peru.

A United Nations reports estimates that an additional two million Venezuelans will leave in 2019. Despite these millions who have “voted with their feet” against Maduro — and the millions more aching to be rid of his regime — the dictator refuses to step aside.

While interim president Guaido works to bring much needed humanitarian assistance to beleaguered Venezuelans, Maduro continues to rob them of the nation’s natural resources, shipping them to Cuba.

Maduro’s alliances with Cuba, Russia, and China raise the stakes of this crisis. Havana has long had a military presence in Venezuela. The Cuban regime’s survival literally depends on subsidized Venezuelan oil.

Pompeo’s visit should reassure our partners that the U.S. is committed to engagement aimed to produce a free and democratic Western hemisphere.

Maduro is also closely tied to Putin’s corrupt regime. Moscow recently sent 100 troops and 35 tons of supplies to Maduro. Large scale Russian military action in Venezuela is unlikely, given the distance between the two countries and Moscow’s capabilities. But by moving troops and supplies into Venezuela, Russia is signaling it intends to protect its investments in Maduro.

As for China, the Venezuelan regime owes Beijing over $20 billion. While China’s interests are less ideological than the other countries, it does not share the region’s commitment to a democratic transition in Venezuela.

The Venezuela problem will not be solved overnight, but hemispheric partnerships with like-minded nations has already advanced diplomatic efforts against Maduro. Fifty-three countries have now joined the U.S. in recognizing Guaido as the legitimate president of Venezuela.

The European Union and countries in Latin America have implemented targeted sanctions against regime officials, and the EU also has decreed an arms embargo. Guaido has ambassadors in the U.S, U.K., Colombia and other countries. In multilateral bodies like the Organization of American States and the Inter-American Development Bank, regional countries have voted to replace Maduro officials with Guaido’s envoys.

It is critical that the U.S. continue deepening partnerships with like-minded nations in Latin America. As the Venezuelan crisis accelerates and nearby countries deal with the fallout and plan for the post-Maduro future, these relationships are key. Pompeo’s visit should reassure our partners that the U.S. is committed to engagement aimed to produce a free and democratic Western hemisphere.

Ana Quintana is a policy analyst in The Heritage Foundation’s Allison Center for Foreign Policy, specializing in Latin American issue.