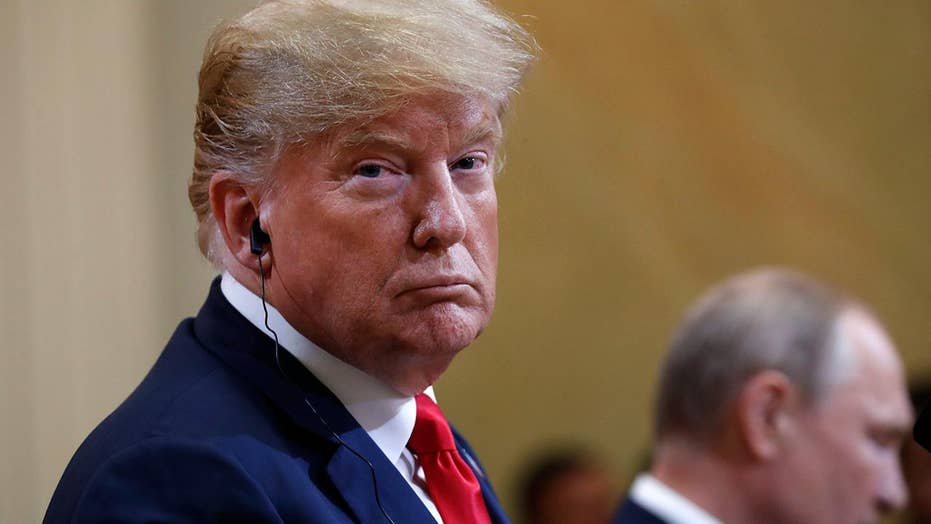 Trump on defense on Russia collusion during Putin presser

Monday in Helsinki, President Trump left many deeply disappointed in his approach to his summit with Russian President Vladimir Putin.

There was nothing inherently wrong with Trump’s summit with Putin. In fact, I would argue that in many cases, some of the best diplomacy comes through face-to-face meetings with adversaries. Still, the meeting was highly problematic in how little Trump delivered on the serious issues surrounding Vladimir Putin and Russia’s place in the modern world.

At their joint press conference, President Putin was calculated and in control. Conversely, President Trump seemed to lack authority, praising Putin when he should have been condemning him, and ceding opportunities to confront Putin on his most egregious actions of the past decade – including meddling in the 2016 election and the illegal annexation of Crimea in 2014.

During Putin and Trump’s prepared remarks, it was rather obvious who had led the discussion. While President Putin laid out a clear framework for advancing Russian interests within the context of U.S.-Russia relations, Trump appeared to have had little plan, alternating between vague promises of improving our relationship with Russia and spending too much time on U.S. domestic affairs, notably the 2016 presidential election. Instead of holding Putin accountable for his election interference, he referenced his defeat of Hillary Clinton.

For a sitting U.S. president to say publicly that he believes a foreign leader over his own intelligence team is shocking and admonishable. At a time when our democracy faces grave threats, it is deeply troubling that the president would side with the very country who attacked us.

When Trump said, “It’s a shame that there could even be a little bit of a cloud over it. People know that, people understand it,” it was a clear example of him circumventing the question.

At one point, President Trump even cited, incorrectly, the Electoral College tallies from over two years ago. This was all in an attempt to deflect questions that he was apparently unable to answer.

Crucially, there were no concessions from Russia on any of the issues that needed to be addressed. Even more concerning, Trump was unwilling to even make the United States’ case on these issues, and the failure to hear concessions from Putin mirrors the lack of follow-through on the grand promises of the recent North Korean summit with another murderous authoritarian, Kim Jong Un.

Despite each nation backing different sides in the Syrian conflict, Trump suggested he and Putin would begin working in conjunction to bring humanitarian aid to the people of Syria, regardless of the fact that the need for humanitarian aid largely stems from Putin’s unabashed support for Syrian dictator Bashar al Assad.

Additionally, Trump also failed to address the concerns of our NATO allies Estonia, Latvia, and Lithuania in the Baltics regarding the territorial threats they persistently face.

Trump, throughout the entire press conference, failed to condemn or even acknowledge the illegality of Putin’s actions in Crimea and Ukraine.

When asked if he would hold Russia accountable for any of its past actions, Trump deflected and deferred. President Trump’s unwillingness to stand up to Russia on this issue only serves to weaken the Western alliance and encourage further Russian incursions into the territory of sovereign nations now that Putin knows Trump will give him a pass.

Most importantly, on election meddling, Trump refused to stand with U.S. intelligence and charge Putin with interference, saying he doesn’t “see any reason why it would be” the Russians carrying out the illegal meddling.

For a sitting U.S. president to say publicly that he believes a foreign leader over his own intelligence team is shocking and admonishable. At a time when our democracy faces grave threats, it is deeply troubling that the president would side with the very country who attacked us.

Additionally, Trump’s failure to distinguish between campaign collusion and Russia’s blatant attack on our democracy allowed Putin to sow more discord during the press conference.

“Could you name a single fact that would definitely prove the collusion? This is utter nonsense, just like the president recently mentioned,” Putin told a reporter.

Trump, and our country for that matter, can only win against Putin if we are assertive about American goals and our values. President Trump failed to accomplish that on Monday.

Instead of standing up to Putin, Trump offered to cooperate with Russia on some of the very issues that Russia is causing.

As some very wise analysts have noted, this strategy is like allowing a criminal to investigate his own crimes. It is foolish and naive and President Trump must simply do better going forward.