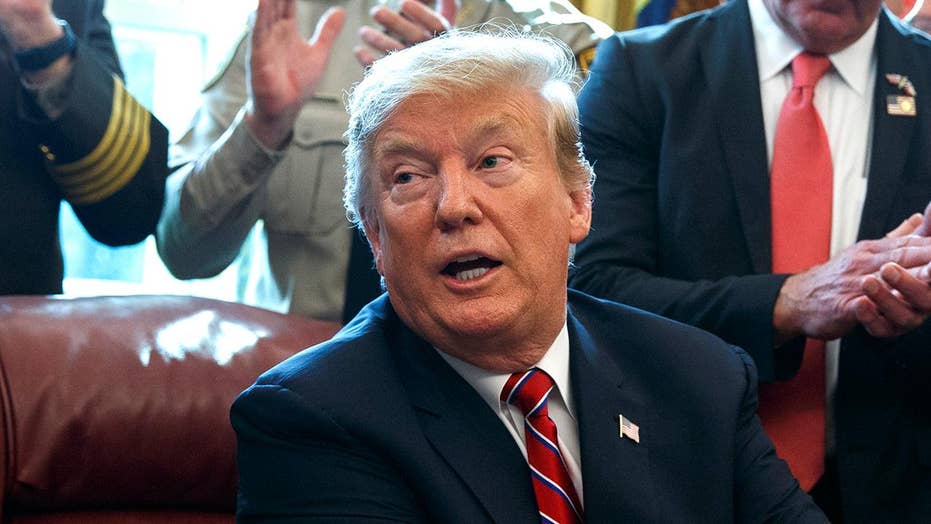 President Trump’s veto Friday of a resolution blocking his declaration of a national emergency on the U.S.-Mexico border showed that he understands he wasn’t elected to appease career politicians in the Senate. He was elected, in part, to secure the southern border and protect American lives.

Despite 12 Republican defections in Thursday’s vote to overturn his declaration of a national emergency, the president is standing firm on his promise to build a wall and secure the border.

“Congress has the power to pass this resolution. I have the duty to veto it,” Trump said in an Oval Office veto-signing event. He was joined by law enforcement officers and so-called angel families, who related their personal experiences with the border crisis.

Attorney General William Barr defended the veto decision, saying, “Mr. President, your declaration of an emergency on the southern border was clearly authorized under the law and consistent with past precedent.”

Trump warned in January that if members of Congress didn’t do their job, he would be forced to make up for their shortcomings by using his executive authority to secure the border.

At that time, the president gave lawmakers every opportunity to reach a compromise on security, even offering several options himself. But he was rebuffed in no uncertain terms by House Speaker Nancy Pelosi of California and her fellow obstructionist Democrats.

But when it comes to protecting the American people, Trump has made clear that there can be no compromise. This is why he stepped in to fill the funding gaps by reallocating previously appropriated money to supplement construction of the border wall. This action is fully within his constitutional powers.

Pelosi’s effort to overturn the emergency declaration was nothing more than a desperate political ploy to reclaim some of the leverage she lost when the president outmaneuvered her by finding a legal way to build the wall despite her opposition.

President Trump is looking out for the countless citizens all over the country whose communities are being overwhelmed by drug abuse, violent crime, and outbreaks of contagious Third World diseases because the federal government failed to control illegal immigration for so long.

The fact that a dozen Republicans in the Senate went along with the effort is testament to the behind-the-scenes political skills Pelosi has honed during her decades in Congress. But it wasn’t enough to keep her from being bested by Trump, a relative political novice who nonetheless found a way around Pelosi’s obstructionism using the very sort of procedural tactic that liberals often praise her for mastering.

There’s no greater duty of the executive branch than to defend the nation from outside harm. Hundreds of thousands of people illegally cross our southern border each year, and too many of those people bring drugs, crime, or disease along with them. This endangers American communities and contributes to thousands of deaths each year due to the epidemic of drug overdoses.

Trump is looking out for the countless citizens all over the country whose communities are being overwhelmed by drug abuse, violent crime, and outbreaks of contagious Third World diseases because the federal government failed to control illegal immigration for so long.

The senators who voted to overturn the president’s emergency declaration were really voting for even more American families to experience this type of suffering.

“Prominent legal scholars agree that our actions to address the National Emergency at the Southern Border and to protect the American people are both CONSTITUTIONAL and EXPRESSLY authorized by Congress,” the President tweeted shortly before the vote, reminding lawmakers that “today’s issue is BORDER SECURITY and Crime!!!”

Publicly, politicians in both parties have agreed that we must secure the border, but behind closed doors, they bickered and dithered without coming up with a realistic plan to do so.

Trump, on the other hand, promised during the 2016 campaign that he would put an end to this madness, and he kept his word by declaring a national emergency after Congress abdicated its responsibility to properly fund border security.

Thanks to a committed core of conservatives in Congress who will ensure that the president’s veto is sustained, the wall is going to be built despite the latest Democratic effort to prevent the enforcement of America’s immigration laws.

Congress had its shot at fixing the problem and failed. The fact that a dozen Senate Republicans supported the anti-wall resolution serves as a reminder of why the president had to use his legal authority to take decisive action to secure the border in the first place.

Jan Brewer served as the Republican governor of Arizona from 2009 to 2015.