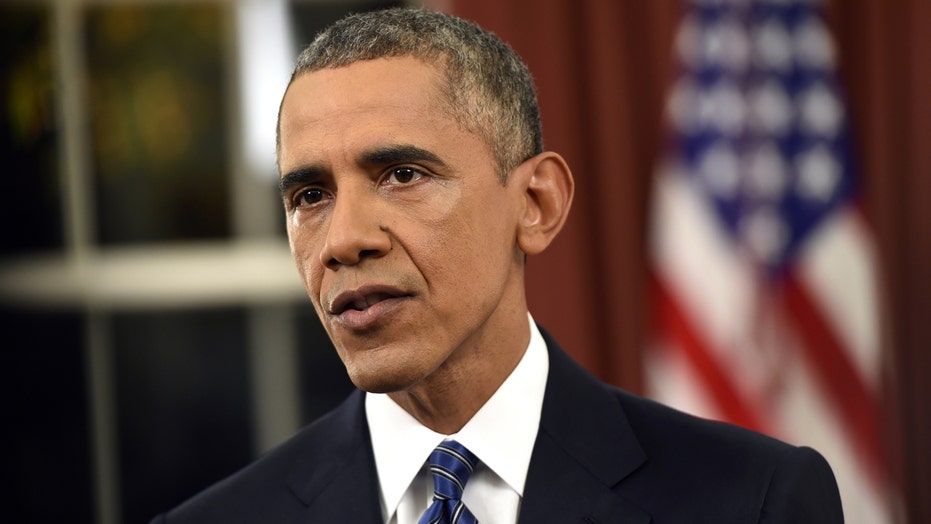 Obama's message to ISIS leaders: 'You are next'

In his televised Oval Office-address to the nation this Sunday, President Obama was expected to outline a real strategy for defeating ISIS and reassure Americans legitimately scared in the wake of its recent attacks.  Unfortunately, he did neither.  After dispassionately promising to continue with his present non-strategy, the President implored Congress to pass a bill authorizing him to destroy ISIS, so long as it blindfolds and handcuffs him during the fight.

Rather than supporting legislation that would allow him to use all necessary and appropriate force to destroy ISIS, the President wants severe restrictions placed on him (and our next Commander-in-Chief) by limiting the use of force and timeline of any action.  This is a recipe for defeat.  As we have seen with the President’s Afghanistan strategy, placing limitations on military action will show our enemies they can wait us out and then continue their reign of terror upon our withdrawal.

In this fight, ISIS must know the President has the power and will to unleash the full might and power of the U.S. military to do what it does best; destroy our enemies and protect our families from these barbarians.  A new Authorization for Use of Military Force (AUMF), which I introduced in February, will give the President, and his successor, the power, flexibility, and resources necessary to exercise the role of Commander-in-Chief in the most effective manner possible.  Many Members of Congress, myself included, are ready and willing to pass this bill, but we also refuse to tie any President’s hands at a time of war.

Make no mistake: ISIS has declared war on Western civilization.  In the wake of the Paris attacks, the downing of a Russian passenger jet, the vicious bombing of civilians in Beirut, and the mass-shooting in San Bernardino, the world can no longer deny the true global reach of ISIS and the savage danger it poses to us all if not destroyed.

At a time of such great peril, I believe the use of force necessary to accomplish our tasks should be debated and granted to the President in order to not only contain the current threat, but to eliminate it altogether.

Over two years ago, I was one of the first to call for the destruction of ISIS. Since then, its numbers have increased exponentially, along with the threat and challenge it poses.  Sitting on the sidelines, hoping they’ll go away hasn’t worked, and the chorus of lawmakers and public officials calling for a resolute response to ISIS has only grown louder.  Now we need the President to listen.

Every day that has gone by without a sufficient American response has led to ISIS reaching its tentacles further into the Western world.  Kidnappings, beheadings, and public executions were just a taste of the evil committed by ISIS in the Middle East.  We’ve now seen their savagery up-close, at home. This is all proof of the ISIS threat to those who embrace freedom and decent society.

We cannot continue to accept that ISIS is equivalent to a “JV team” or that it has been “contained,” as the President has incorrectly stated.  We need a real strategy to effectively destroy ISIS and reclaim the territory it occupies rather than the President publicly ridiculing those who disagree with his non-strategy.

We need to acknowledge that America plays an indispensable role in leading this fight.  As we’ve stood on the sidelines the last several years, Iran and Russia have filled the power vacuum while pursuing interests that only further threaten our national security. That is why I have been calling for Congress to debate and pass an AUMF for the President that does not limit his authority and allows him to utilize all our military tools to defeat ISIS.

As a veteran of our nation’s wars, I take very seriously the importance of protecting our country. At a time of such great peril, I believe the use of force necessary to accomplish our tasks should be debated and granted to the President in order to not only contain the current threat, but to eliminate it altogether.

Rather than utilizing limited airstrikes and putting small numbers of Special Operations Forces on the ground, a new AUMF will allow the President to attack ISIS at its heart in Syria and every safe haven across the Middle East.  This would require additional personnel on the ground to train Iraqi, Syrian Opposition, and Peshmerga forces, as well as utilizing air controllers to effectively direct attacks on ISIS strongholds, among other things.  Most importantly, this AUMF would put Congress on record as supporting the mission and would tie neither this President’s hands, nor the next.

Preventing large-scale attacks like Paris from happening on our shores should be a top national security priority and we need to do whatever is necessary to ensure we achieve our stated objective of eliminating ISIS once and for all.

More needs to be done to attack the problem at its heart, which includes taking the fight to ISIS, and putting an end to the reign of the man who incubated this cancer: Syrian President Bashar al-Assad.  A new AUMF will help do just that.