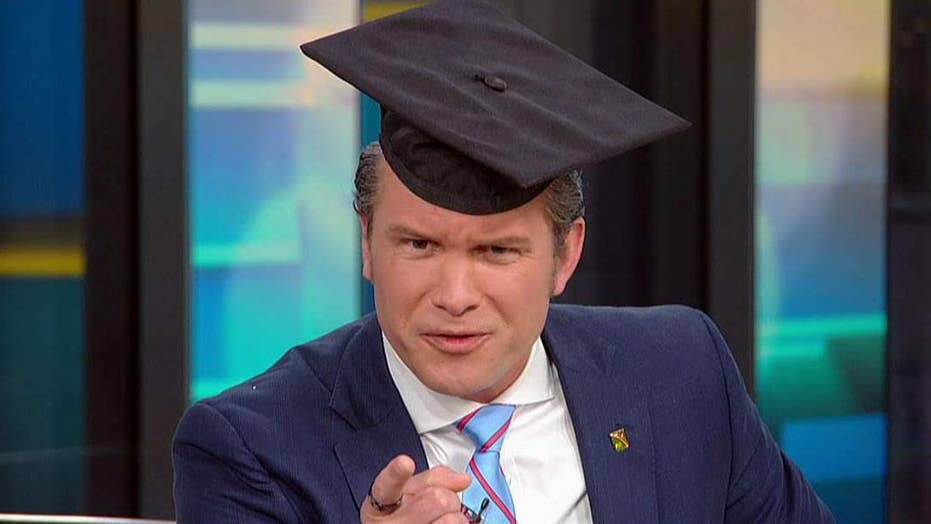 ‘Tis the season of commencement addresses. You know, those lengthy, vapid, and self-important speeches that conclude the collegiate experience. The vast majority of graduation speakers are leftists and Democrats, predictably extolling diversity, globalism, identity politics, gender empowerment and – of course – climate change. Most graduates hungover and bored, absorb the platitudes. After the speech, a degree in hand, the indoctrination is complete.

I won’t attempt to give you my own commencement address here (you’ll have to watch Sunday’s “Fox & Friends” when I give the first-ever “Fox & Friends” Commencement Address – tune in!). Instead, I simply want to highlight three stark realities that students and parents should know, rather than accept the onslaught of advice from liberals, leftists, and Democrats. A little common sense that otherwise gets missed in the mad rush to get a degree.

First, you just wasted a lot of time and money. Plenty of students drift through four-year colleges because, well, that’s what you do. I did the same thing. Now you have a degree you didn’t really need, and mountains of debt to boot. A better option for many students is a non-ideological, private-sector vocational or trade school. Schools focused on specific skills that actually prepare you to get real jobs with great pay.

Predictably, Democrats want to destroy private-sector higher education in favor of their existing network of cash-machine indoctrination camps. Democrats are using a simple, but effective, playbook to destroy private sector higher education: define taxpaying colleges as evil, propose policies to restrict access to private career colleges and offer “free” public college to the masses as a solution. It’s false but sounds great. Nothing is free – you might not have learned that in Economics 101.

The mafia of higher education – just like government-run public high schools – seeks to demagogue and destroy all competing educational opportunities and choices. Our only option, at this level and every level of our education system, is to rebel. Start our own schools, advance for-profit colleges, homeschool our kids, and challenge the government-run, public-school orthodoxy.

Even the “good schools” with shiny new buildings and small classroom sizes are infected with liberal indoctrination. Assume nothing. Watchdog everything. Does your kid’s school say the Pledge of Allegiance? You probably don’t know (and don’t want to know). What holiday is more important at your kid’s school – Earth Day or Veterans Day? Or Presidents Day? Don’t even try to mention God – that could get you expelled. Public, government-run institutions are P.C. indoctrination camps. Our only hope is private sector schools and vigilant private citizens.

Second, most of what you just learned is garbage. How much time during your education did you study civics, U.S. history, or the Constitution? Did you learn about how our founding generation viewed human nature and government, or just that they were slave owners? Did you ever study the Bible (the textbook of Western Civilization) – or just deconstruct academic skepticism about the life of Jesus? (The very Ivy League institutions founded on biblical education now loathe Christianity, must I say more).

Or, instead, were you required to take courses on gender studies, ethnic studies, and the lost art of underwater basket weaving? It’s not that we shouldn't study the plight of women and minorities in American history – of course, we should. The problem is that most students leave college (and middle school!) with a strong sense of America’s sins, and very little idea of why America is the freest, most fair, most tolerant, most just, most prosperous, and most powerful country in human history. The American “experiment” has worked…if we teach it.

The perfect example of the listlessness of higher education today comes from Harvard Law School – the so-called gold-standard of law schools. Law students who matriculate there are not required to take a class on…wait for it…the U.S. Constitution. We are now looking at a generation of high-powered lawyers who may or may not understand the greatest political document in human history. It’s lunacy, and very dangerous.

Finally, your real education starts now. No more safe spaces or trigger warnings. Your debt needs to be paid off, the world doesn’t care about your feelings, and your parents’ basement is embarrassing. You have your life in front of you – and a country that needs you. Get to work, follow your passions, and – if necessary – get the skills somewhere else that you actually need to achieve the American dream.

You may have wasted a lot of time and money in college, but so did everyone else. Now is the time to open up your Bible, pick up a history book, and get a job. History is not over, and you can choose to be a part of it. Toss your cap and gown in the garbage (you’ll never wear them again) and join the American experiment. We’re hiring: Patriots wanted!