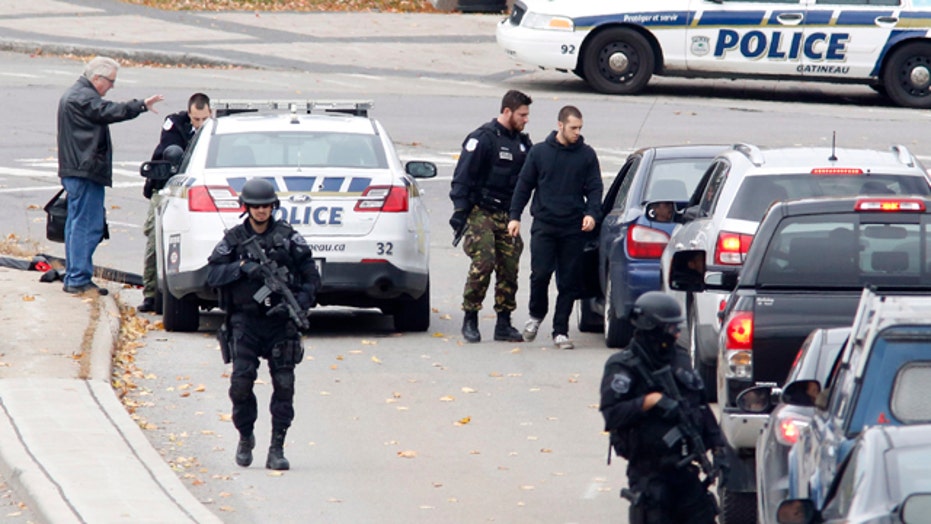 Should US be on edge after Canada attacks?

Are shootings in Canadian Parliament complex indicative of terror or a lone wolf? What precautions should US officials take?

An unarmed Canadian military guard was shot in Ottawa Wednesday morning by Michael Zehaf-Bibeau, a convert to Islam and a self-declared jihadist whose alleged photo was posted hours after the shooting on Islamic State social media.

The killer then entered the Canadian Parliament presumably with the intention of massacring lawmakers inside their caucus rooms. Zehaf-Bibeau was shot by the Parliament’s sergeant of arms, who became a citizen soldier for that particular moment.

Canadian authorities launched a counterterrorism operation to track other possible gunmen at the same location. Forty hours earlier, another member of the Canadian military was killed by an indoctrinated convert, identified as Martin Rouleau, in the province of Quebec. Weeks before, threats issued by the Islamic State included directives to their members and supporters to strike — in any way they can — against the United States and its allies, including Canada, in retaliation for Coalition airstrikes against jihadi forces in Iraq and Syria.

But years before this episode, Al Qaeda and other jihadists tried to commit bloodshed in Canada, including a plot to behead the prime minister — also in Ottawa.

The jihadists’ justification is that Canada is participating in the airstrikes, but this represents only a part of the greater conflict. For years there have been attempts to hit Canadian citizens, cities and military. Wednesday’s shooting in the country’s capital was the most shocking, but not very surprising.

The question is why Canada is being attacked by jihadists (if indeed the shooters are committed to this ideology or linked to any of these movements).

Canada has a strong record of promoting human rights around the world. It maintained relations with Iran when Tehran cut its ties with the United States in the 1980s.

Ottawa protected the rights of Canadian Islamic militant citizens when they were about to be remitted to the Syrian regime half a decade ago.

All in all, Canada has not been in the forefront of fighting the jihadi terrorists but joined the international campaigns inasmuch as Saudi Arabia, the UAE, and Egypt did. So why would a jihadist single out our northern neighbor?

In the jihadist ideology, there are no good infidels and bad infidels; there are only infidels. Canada happens to be outside the ISIS “caliphate” and belongs to an Atlantic alliance led by the most dangerous infidel power, the United States.

Like Sweden, which was hit years ago, Canada is considered a “permissible” recipient of violence. But the ideological argument is not the primary reason it is in the crosshairs of ISIS and Al Qaeda or a target for local jihadists.

This is reminiscent of the 2004 terror attacks in Madrid. Spain was not the lead force in the invasion of Afghanistan or Iraq, but it was considered the “weak point” in the Western alliance.

The hitting of Madrid’s trains aimed to force Spanish troops out of Iraq. The goal was to de-internationalize the campaign against Al Qaeda. With Spain out, Europeans would hesitate to engage in nation-building or democracy-building in Iraq. At least, this was the Al Qaeda plan. And it was partially successful, as Madrid ordered its troops out after the attacks.

The jihadists are targeting Canada because they consider it a “weak-link” partner in the Western alliance. Forcing Ottawa to withdraw from the air campaign is comparable to forcing Australia to pull out. We know the Aussies foiled a pro-ISIS terror attack few weeks ago.

The French are also nervous about urban attacks inside their country related to the fight in the Levant. The beheading of British and U.S. citizens is not alien to the jihadist strategy.

Islamic State statements and social media declarations have warned all their attackers that their countries are subject to counterattacks. The Islamic State has also openly asked its supporters to do everything they can, as soon as they can, by any means, without any coordination, to harm all these Western nations.

The questions to be raised about the Quebec and Ottawa killings are about the networks indoctrinating these local jihadists, converts and radicalized Muslims.

We know that the Islamic State and Al Qaeda have called on their members and sympathizers to strike U.S. military personnel at will and by any means necessary. And while we know there is a specific instruction to target military personnel, among others, Canada is targeted because the jihadists are waging a war in the Middle East to establish a caliphate with control over lives, oil and territory.

The terrorists unleashed in the West, lone wolves or jihadi packs, are extensions of the Islamic State — and possibly its Al Qaeda cousins. They are enemy combatants striking in a war that the West, and Washington in particular, has refused to name.

Canada is hit because it is part of the alliance, not because of an internal issue. The response should be collective, not individual. Solidarity with Canada must be the first order of the day in the United States and the rest of the free world.