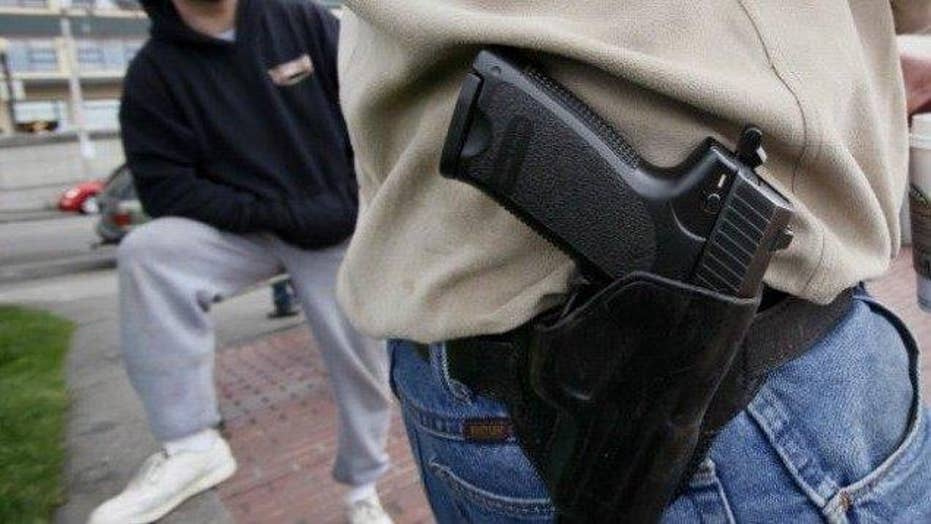 Reaction to concerns from businesses on 'The Real Story'

With about 900,000 concealed handgun permit holders in Texas, there is a good chance that someone next you in a Lone Star State grocery store or restaurant is carrying a concealed handgun.  Starting Friday, Texas will join 44 other states that already allow people to openly carry handguns throughout the state.

Amidst today’s threats of terrorism and mass public shootings, it is a good thing when we enable people to legally carry guns and protect themselves.

Under the new law, a person will need a concealed handgun permit to be able to openly carry a gun.

If the experiences of other states are any guide, few people will actually openly carry their handguns.  Moreover, businesses can still prohibit guns or request that they be concealed.  However, the Chief Financial Officer of Kroger (America’s largest supermarket chain), has just said that the company will allow open carry. He says that the company hasn’t encountered any problems with open carry.  Other supermarket companies such as Whole Foods, Randall’s, and H-E-B, will be posting signs banning open carry. They will still be allowing concealed carry.

These bans may be short lived.  When Texas originally passed concealed carry in 1996, many stores initially posted signs banning concealed carry. With a few years, those signs all but disappeared.

An odd nuance in Texas law has led to much national attention in the last couple of years.  Before Friday, people were allowed to openly carry rifles, just not handguns.   No problems ever occurred, but simply the additional handling required for carrying rifle as opposed to keeping a holstered handgun, certainly created concern that something might go wrong.

Hillary Clinton also chimed in: “The idea that you could have an open carry permit with an AK-47 over your shoulder walking down the isles of a Supermarket is just despicable.”

Starbucks, Jack in the Box, Chipotle, Wendy's, Applebee's, Chili’s and Sonic’s all “respectfully request” that customers not openly carry guns.  More importantly, however, they still allow people to carry a concealed gun.

Openly carrying handguns are less threatening than rifles and will likely face no greater P.R. issues than they have in other states.

But open carry has an important drawback.  It isn’t as effective as concealed carry in protecting people against terrorist attacks and mass public shootings.

Criminals and terrorists can strike anywhere and at any time.  They can attack someone who is openly carrying a gun.  Alternatively, they can select another target or wait for a more opportune moment.

Concealed carry is the most effective way of counteracting this strategic advantage.  A killer can’t attack a big grocery store in Texas without facing likely resistance.  And, of course, an attacker has no idea who might be packing heat.

Since at least 1950, all but two of the mass public shootings in the U.S. (and every single one in Europe) has occurred in a gun-free zone.

PoliceOne, the largest private organization of police officers in the US,  recently asked its 450,000 members: “Considering the particulars of recent [mass shooting] tragedies like Newtown and Aurora, what level of impact do you think a legally-armed citizen could have made?”  Eighty percent said: “Casualties would likely have been reduced.”

In the U.S., over 13 million American civilians are licensed to carry concealed handguns. Every day, permit holders stop crimes. But they have also stopped a large and growing number of mass public shootings.

Concealed carry in Texas isn’t as common as you may think – just over 4 percent of the state’s adult population has permits.  But the rate is more than twice as high in Pennsylvania and Florida, both also large states.

There’s a simple reason for this. Texas charges a permit fee of $140 – one of the highest in the country.  Lower fees would increase the number of concealed carry permits and the number of people who can protect others.  It would especially help the most likely victims of violent crime -- poor black men and women living in high-crime urban areas.

A year from now, I predict that people will wonder why such a fuss was made about open carry.

While Michael Bloomberg may have scored some temporary P.R. victories against open carry his fear tactics will be discredited in the long-run.