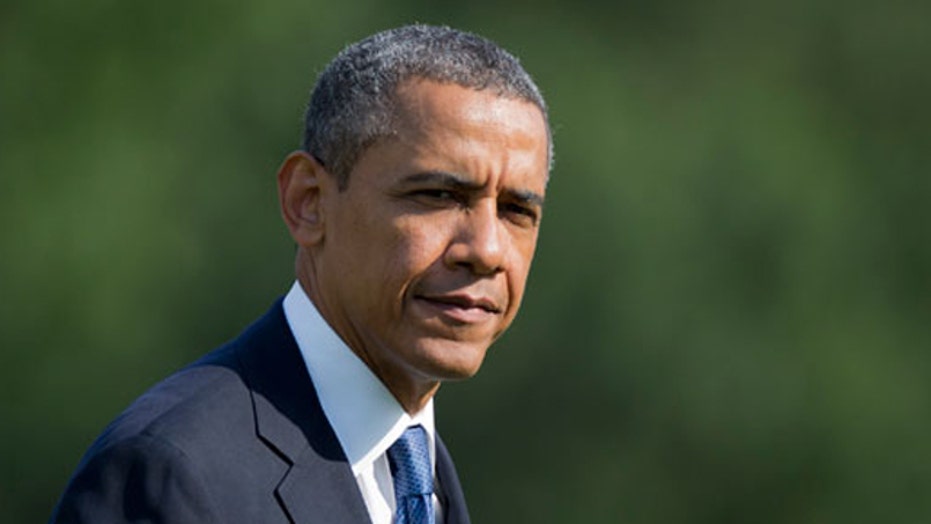 Why is President Obama asking for “Authorization for Use of Military Force against the Islamic State of Iraq and the Levant”? Why ask for permission to carry on with operations that have been underway for more than six months and that are permitted under a 2001 authorization that is still in place? Because he doesn’t know what else to do.

Mr. Obama is being hammered by many on the left and the right for his wavering efforts to destroy the terrorists who have killed and pillaged their way across large swaths of Iraq and Syria. He has been mocked for admitting to having no strategy for their defeat, and he has been criticized for his lack of resolve.

Mr. Obama’s 2008 promises to end the War on Terror and his 2012 assertions that we indeed were winning that battle are crumbling like month-old muffins.

As many have noted, he has been unwilling even to identify our enemy as Islamist extremists or to acknowledge that this is a religious confrontation. Though he has made the case that our coalition forces are holding the line against ISIS’ further advance, Americans are not so sure we are making progress. They are more impressed by the horrifying murders perpetrated by the ISIS savages, and they want more from their president.

Mr. Obama’s 2008 promises to end the War on Terror and his 2012 assertions that we indeed were winning that battle are crumbling like month-old muffins.

Meanwhile, the unnerving battle against terrorism threatens to upset the president’s legacy pursuit here in his final innings. Each time Mr. Obama reveals another leftist agenda item, ISIS rolls out another barbaric video. In the public’s imagination, free community colleges are no match for the incineration of a Jordanian pilot. The murder of Kayla Mueller trumps increased maternity leave. Unwillingly, Mr. Obama keeps being dragged back to the Middle East.

Mr. Obama’s 2008 promises to end the War on Terror and his 2012 assertions that we indeed were winning that battle are crumbling like month-old muffins. After hauling troops precipitously out of Iraq, we are sending them back in again. After committing to bringing our soldiers home from Afghanistan, he hints some may have to stay after all. Another legacy pillar bites the dust.

President Obama has decided that he will bring Congress in to debate the merits of his still unformed strategy, specifically to argue about the circumstances under which our military will continue to battle ISIS.

He knows full well that members of Congress can be counted on to sound alternately rashly aggressive or absurdly pacifist.

The John McCain wing wants an all-out assault on the enemy, wherever they are, by whatever means we have at our disposal. Take no prisoners.

Nancy Pelosi et al wish the legislation to be “narrowly tailored,” as though our commanders should specify which zip codes we’ll be attacking, and maybe publish our flight plans ahead of time.

With good reason, Mr. Obama is confident that his will emerge as the voice of reason.

The resolution, as outlined by the White House, gives lawmakers plenty to bicker about. As might be expected, it’s full of caveats and restrictions, which may win over anti-war Democrats and Republicans but which will clearly inflame those who support more robust military action and who chafe against Mr. Obama’s legalese. Limiting its term to three years appears arbitrary, while the embargo against “enduring offensive ground combat operations” is murky.

At the same time, requesting this authorization will allow Mr. Obama to embellish his favorite meme — that Congress has prevented him from carrying out his agenda. But for the Republicans on the Hill, he has often claimed, he would have enacted measures that would have added even more jobs, slowed the rise of the oceans, boosted the middle class and burnished our image overseas.

Since the midterm elections, he has been terrified that the newly empowered GOP might actually pass popular legislation, like the recent authorization of the Keystone XL Pipeline, or that it might enact sensible tax reform that would win the applause of a country tired of bickering and of a lack of progress.

Americans are fed up with Obama’s tendency to go it alone — his executive action on immigration, for instance — and they are ready for a change. Nothing could be more damaging for Mr. Obama’s legacy (or for his party, though that appears a secondary concern) than the emergence of a unified, successful, responsible Republican Party. Such a renewal would pave the way to electing a GOP president next year who might well roll back the most unsavory aspects of ObamaCare, or EPA regulations — undoing Obama’s most cherished programs. That he cannot tolerate.

Now, if  the debate in the House and the Senate drags on and we fail to abolish the ISIS horde, Obama can explain, once again, that it’s all the fault of Congress. That’s much easier than actually “degrading and destroying” ISIS. Especially without a plan.