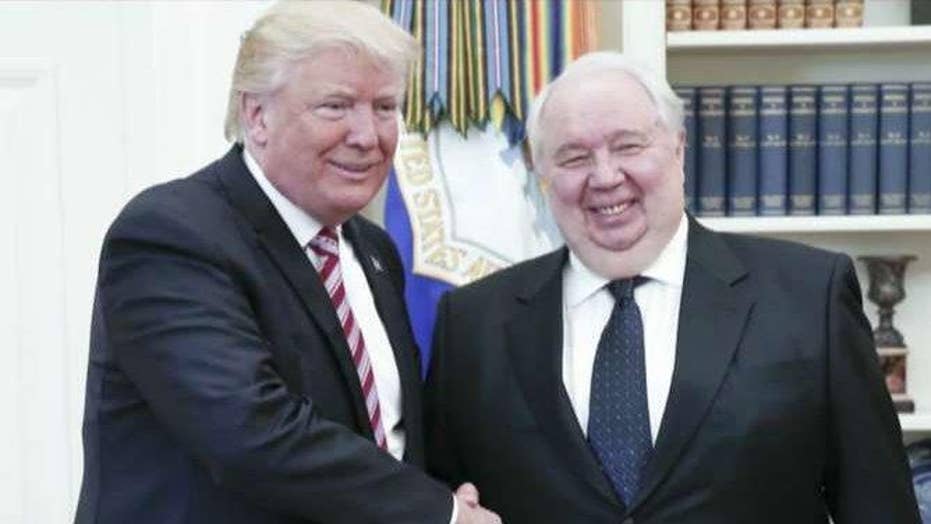 Reaction from Chris Stirewalt, Judge Napolitano and John Roberts on 'The Story with Martha MacCallum'

Note: I wrote this before the latest despicable, dishonest smearing of the President, but that incident simplify magnifies my case.

"There's nothing that the president takes more seriously than the security of the American people. The story that came out tonight as reported is false. The president and the foreign minister reviewed a range of common threats to our two countries including threats to civil aviation. At no time, at no time were intelligence sources or methods discussed. And the President did not discuss any military operations that were not already publicly known. Two other senior officials who were present, including the secretary of state, remember the meeting the same way and have said so. Their on-the-record accounts should outweigh anonymous sources. And I was in the room, it didn’t happen."

This simply reinforces the following, which I wrote earlier today.

After almost four months of watching the news media’s unending dishonesty, hostility, and contempt toward the Trump administration, it is time to have a blunt conversation.

The President owes Americans the defense of the United States Constitution.

The President owes the American people a sound job as commander in chief, protecting the country.

Indeed, the President owes the American people many things.

But the President does not owe anything to the Washington press corps and the left-wing hypocrites who dominate today's news media.

I first learned this rule after reading the transcript from President Franklin D. Roosevelt’s opening press conference with the White House Press Corps on March 8, 1933. During FDR’s inaugural meeting with the press, no one was permitted to directly quote the President except via a prepared quote from his office. The vast majority of the conversation was either without attribution or completely off the record. The purpose of the meeting was for the media to understand what was going on – not for them to play gotcha or win clever attacks disguised as questions. Those were the rules.

Since Watergate, the news media has acquired a steadily more arrogant attitude and has moved further and further to the left. Today, they are adversarial opponents of conservatives– especially the Trump administration.

I learned the hard way as Speaker of the House that I could not regularly meet with reporters on camera. It set up an arena for gotcha questions. Reporters gained imaginary points for finding stupid, narrow, often irrelevant things to argue over. Instead of being an opportunity for a genuine public dialogue, the daily on-camera briefings became a bloody battleground – totally to my disadvantage. Within a few weeks, we were forced to stop.

President Trump's instinct to radically overhaul his relationship with the media is exactly right.

When reporters behave like picadors in daily briefings, trying desperately to taunt and embarrass Sean Spicer rather than listen and report on what he’s saying, it undermines our free society's right to accurate information. The daily briefing may draw big audiences as a reality television spectacle, but it does not serve the country or President Trump well.

While there remain some serious, historically-minded reporters, they are unfortunately becoming more of a rarity. Instead, much of the Washington press corps has become an incestuous collection of voyeurs who watch, judge, and attack without knowledge or responsibility. This creates a hostile, propagandistic, and distorted version of news coverage.

A visit by Egyptian President el-Sisi to the White House last month led to a young American woman being released from an Egyptian jail. Had Obama achieved this, it would have been lauded by the press as a major sign of leadership and compassion. However, because it was President Trump, the media mostly ignored it.

Similarly, when the new relationship between President Trump and the Chinese President Xi Jinping directly resulted in a trade breakthrough for American beef, natural gas, and certain financial services, ending a 13-year period in which the Chinese refused to buy American beef, we heard very little from the media. It should bring billions of dollars into the United States, yet the media felt it wasn’t important enough to cover.

The recent jobs numbers – manufacturing, in particular – have been remarkable. But, of course, most Washington reporters treat the release of these numbers as non-events. After all, this would mean they have to report good news, and in the left-wing newsrooms in which they are all so deeply embedded, positive news related to the President is simply not permissible.

The President’s upcoming trip to Saudi Arabia, Israel, the Vatican, Brussels and the G-7 in Sicily is a remarkable tour for a new president – especially one who the media insisted knew nothing about international relations. But, of course, the Washington news media wants to trivialize the trip with a discussion of White House gossip and whether the diplomatic journey will have a big domestic effect – as they define it.

If you review the first four months of news coverage – much of which is based on unnamed sources – it becomes obvious how overwhelmingly negative, hostile, gossipy, and focused on undermining and weakening President Trump and his team the press corps truly is.

Given a choice between writing a story about a big historic accomplishment and a petty piece about infighting in the White House, the Washington press corps will go for the dirt every time. If Washington is the swamp, the media is the muck.

I challenge anyone to analyze the last four months of news coverage of President Trump and come to the conclusion that it is unbiased, serious, or focused on important topics.

My guess is, that you will unfortunately come to the same conclusion that I have. In this instance, President Trump should take a note from FDR to remind the Washington press corps that he works for the American people – not the elite media.