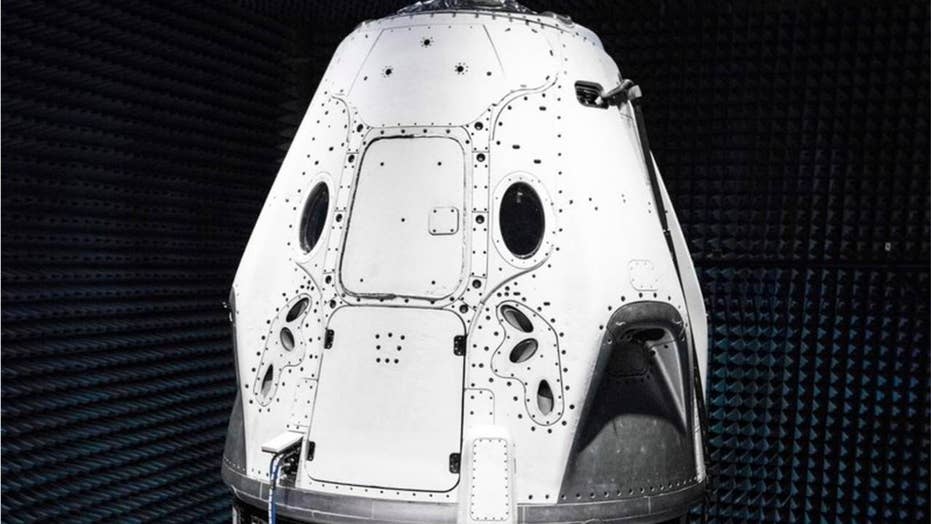 Elonk Musk shared a photograph of its next generation SpaceX Dragon capsule.

Much of American history has been created by entrepreneurial pioneers who kept inventing things.

Eli Whitney created the mechanical cotton gin in 1793, which sparked a revolution in the ability to process cotton. His development of interchangeable parts for manufacturing revolutionized productivity in factories.

Robert Fulton launched the first commercially successful steamboat that brought passengers from New York City to Albany in 1807. Profitable, timely and efficient, it set a pattern for steamboats that revolutionized travel.

The Wright Brothers discovered how to fly in 1903.

Henry Ford developed the first mass-produced automobile, the Model T, which was introduced in 1908 and designed to put average Americans on wheels. Its price regularly dropped over the years it was on the market, as Ford focused on developing transportation that working people could afford.

Throughout our history, America has been shaped by entrepreneurial risk takers who were focused on innovation – and on doing and making things better and cheaper.

Along the way, government has traditionally helped by not getting in the way of the inventors and entrepreneurs – and making sure they had a fair commercial playing field to try out their ideas. This is one reason why the rise of Bernie Sanders-style socialism is alarming – it is the opposite of historic American inventiveness, creativity and progress.

Today this tradition of aggressive entrepreneurs is taking on new life in working to get Americans into space, something I discuss in my new book, “Trump’s America.”

Christian Davenport has written a terrific book on the new space entrepreneurs. “The Space Barons: Elon Musk, Jeff Bezos, and the Quest to Colonize the Cosmos” is a great introduction to the exciting new developments that make the space ambitions of President Trump and Vice President Mike Pence increasingly achievable.

Bezos, the wealthiest man in the world (for now) is putting $1 billion a year of his own money into the steady, methodical, step-by-step development of advanced, powerful, reusable rockets. Bezos has been so successful, he can simply write an annual check and hire engineers to make things.

There are no congressional hearings, no federal regulations and no overstaffed planning bureaucracy to slow things down. Blue Origin, the Bezos rocket company, may be one of the great pioneers of the next generation in space. There is a fair chance Bezos will bring enormous savings to getting into space, just as he has brought enormous savings to shopping online through Amazon.

Elon Musk is almost Bezos’s opposite – a great showman, a constant marketer, a visionary who sells his vision to anyone who will listen. Musk has sought government subsidies, while also investing his own funds. His firm, SpaceX, has pioneered reusable rockets and is building an impressive record of successful launches at dramatically lower prices.

One of the great strengths of the entrepreneurial model is that very different personalities can focus on their individual strengths and achieve things in unique ways. This freedom to think creatively – unhindered by bureaucratic and political constraints – is one of the great advantages that a free market has over a bureaucratic state.

Instead of arguing, planning, and regulating for the “one right way,” entrepreneurs can follow their passions, learn the lessons from their mistakes, and invest in reinforcing their successes.

Richard Branson, who is British, is an even more flamboyant showman than Musk. His efforts to create the first space tourism system with Virgin Galactic have taken longer, involved more frustrations and cost more money than he originally projected.

Branson’s new VSS Unity, a SpaceShipTwo vehicle, has had multiple successful flights. It is carried to 50,000 feet by a large composite aircraft called WhiteKnightTwo and then launches to the very edge of space (about 60 miles up). The spaceship is designed to carry six passengers with two pilots. Branson plans to have a fleet of spaceships carrying passengers to the edge of the atmosphere on a regular basis.

The fourth billionaire, Paul Allen, paid for the development of the composite technology Branson uses. He represents yet another path toward space. Allen was a co-founder of Microsoft. He has taken a very long-term approach to developing a profoundly different approach.

Where Bezos and Musk have pushed the development of traditional rockets, Allen is building the largest airplane in the world. It is essentially two planes connected by a midsection for a total wingspan of 385 feet. It uses six Boeing 747 engines to carry rockets or spaceships to high altitude. Allen wants to develop a space transportation system with the routine regularity of commercial airlines.

The fifth great pioneering entrepreneur is not a billionaire, but he has been one of the most influential designers of our time. Burt Rutan has spent a lifetime designing unique aircraft and spacecraft. In fact, he worked with Allen to develop the composite materials and the visionary design that became the Branson SpaceShipTwo.

In some ways, Rutan is a modern-day Thomas Edison. He is a continuously curious and inventive person who improves nearly everything he touches. He has been sustained by a lot of private contracts because his kind of constantly evolving intellect does very badly in a large government bureaucracy.

The remarkable thing about the rise of the space entrepreneurs is that they may push Americans out into space three or four generations before the government model would have allowed.

As entrepreneurs, all five of these leaders want to see lots of people in space. This is not hyperbole. They literally want to see tens of thousands of people in the next generation working in, visiting and developing space. They want colonies on the moon and Mars. They want to see people mining asteroids. We should work to make sure these are all American-led endeavours.

Behind them, there are younger and even more inventive and daring entrepreneurs building new technologies, crashing costs and dramatically enhancing our ability to do things in space.

The Trump-Pence vision of a bold American future in space will be achieved far more quickly by these free market entrepreneurs than by government bureaucracy.

If government allows and enables these entrepreneurs – and the new ones they inspire – to lead America in a new space race, there is no doubt we will win.