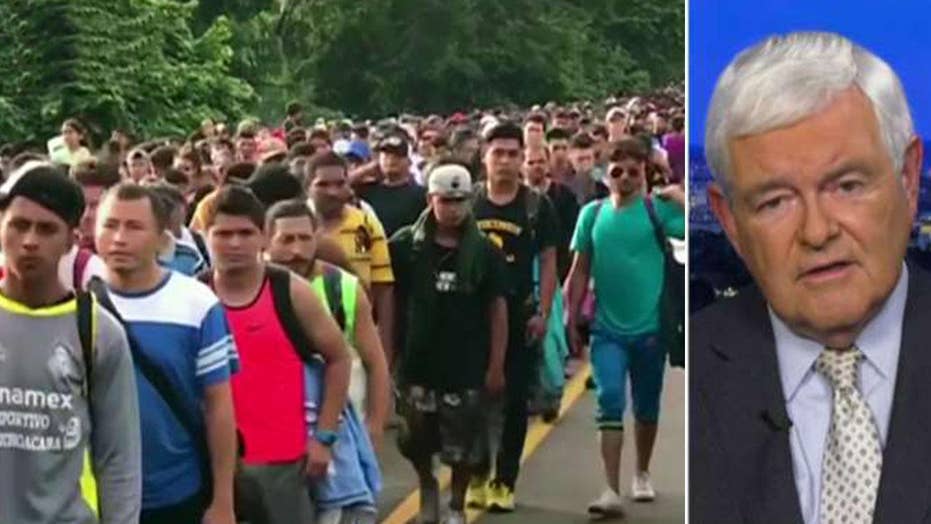 Why Newt Gingrich says caravan is 'an attack on America'

President Trump tweeted the U.S. will cut foreign aid to countries that have failed to stop a growing group of thousands of migrants marching toward the U.S. border; insight from former Speaker of the House Newt Gingrich.

The caravan of an estimated 7,000 Central American invaders trekking through Mexico toward the United States is roughly 1,000 miles from the nearest point of entry. A second group of roughly 1,000 is also seeking to join them.

They may still be weeks away from our border, but this leaves little time for President Trump, Congress and all Americans who care about our national sovereignty and the rule of law to solve three incredibly pressing challenges. I discussed these on Monday on Facebook.

First, we must determine – and do – what we can right now to end this invasion before it reaches our doorstep.

Second, we must develop and execute a cohesive, efficient, effective plan for preventing these invaders from illegally crossing our border – and for swiftly deporting those who are successful.

Finally, we must fix the debilitatingly stupid amalgam of immigration laws, policies and court rulings that enable and encourage migrants to band together and stage these types of illegal invasions.

Should we fail to solve any of these problems, our already dysfunctional immigration system will be further crippled, our relationships with Mexico and our Central American neighbors could be severely damaged, our border will be overwhelmed by droves of new migrants, and America will become significantly less safe.

If we are serious about preventing this caravan invasion from being imitated, we must overwhelm the invaders, stop them in their tracks, and quickly return them to their home countries.

If this caravan is allowed to get through and enter the U.S., the next caravan will be even bigger – and the one following that will be enormous.

According to the Gallup World Poll, 29 percent of people who want to migrate from Latin America and the Caribbean want to make the United States their permanent homes. That is 37 million people who want to come here. We must demand and ensure that they do so legally.

The clearest answer to alleviating this issue – while the caravan is still in Mexico – is for Mexico to stop it. President Trump has already made clear that securing the border is more important than our recent trade agreement with our southern neighbor. Mexico should take him seriously.

Many of the members of this caravan forced their way through the Guatemala-Mexico border. They are already in violation of Mexican law. Mexican law enforcement should take action.

Furthermore, we should not underestimate the degree to which human traffickers and transnational criminal gangs, such as MS-13 and other cartels, are involved with this invasion force. Mexican authorities should also be seeking to weed these elements out of the caravan – and dealing with those who may have legitimate asylum claims through the Mexican system.

Our Mexican neighbors must understand that while they did not assertively deal with this problem at their southern border, they will own the problem if it gets to their northern border.

This relates to what we must do if or when the caravan is allowed to arrive at the U.S. border.

President Trump should instruct Attorney General Jeff Sessions to issue a clarification to define the qualifications for asylum. Asylum is meant to provide protection for people who are fleeing real persecution and human rights abuses, such as genocide. Simply being from a poor country that lacks opportunities does not qualify someone for asylum.

We already have approximately 750,000 backlogged asylum cases, and some of those cases date back to 2014. These invaders should be screened (preferably in Mexico) so they never enter the U.S. system.

The federal government should also immediately begin coordinating with local and state governments along the border to develop an organized, completely nonviolent system that can deter these migrants from crossing into the United States. And this new system should process and return those who do cross our border within a matter of days – not weeks, months or years.

I know Texas already works with federal officials to prepare for mass migration events. Other border states should follow suit (if they don’t already) and begin preparing now for this caravan’s potential arrival.

If we are serious about preventing this caravan invasion from being imitated, we must overwhelm the invaders, stop them in their tracks, and quickly return them to their home countries.

By my estimate, we should have four to five U.S. personnel for every member of the caravan. If we want to protect our country, our border, and our rule of law, we must mobilize so much force that we don’t have to use it.

The news media should be allowed to cover the preparation and the overwhelming response to the caravan, so the members of the caravan – and every potential caravanner across Central and South America – will see that their plan will not work.

These first two problems are urgent and difficult. The third problem is just as urgent – but it is an order of magnitude more challenging. That problem is figuring out how we must fix our failing immigration system so that this type of situation doesn’t arise again.

Our immigration system has been completely broken by Democrat-backed laws that make it easier for immigrants to flood our system and stay in our country while their cases take years to process.

The immigration system has been further hobbled by activist judicial rulings that have tied the hands of border enforcement officials and prevented them from keeping track of those who cross the border illegally.

Once we deal with the immediate problem of this invasion caravan, Republicans and the White House must work to fix our broken immigration system once and for all.