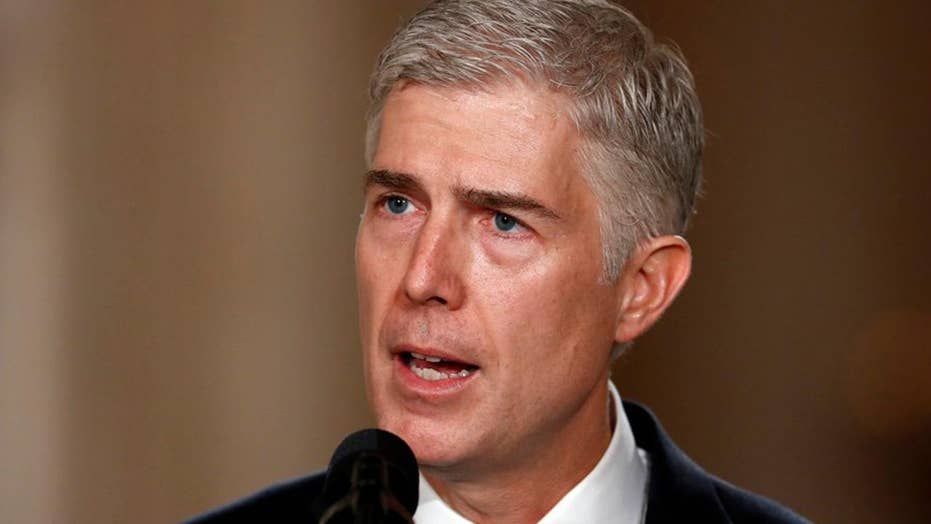 What battles lay ahead in Gorsuch's confirmation process?

His nomination of Judge Neil Gorsuch to the United States Supreme Court on Tuesday was a brilliant move on multiple levels.

First, Judge Gorsuch is an eminently skilled jurist who has brought a decade of intelligence, decorum, and wisdom to the 10th Circuit of the U.S. Court of Appeals in Colorado. While Justice Antonin Scalia is certainly irreplaceable, Gorsuch will do an excellent job filling Justice Scalia’s seat.

It would be difficult to reasonably question his judicial credentials. Gorsuch attended Columbia University, is a graduate of Harvard Law, is a Marshall Scholar at Oxford University, and was unanimously confirmed to his current judgeship by the Senate in 2006.

This brings us to the second reason why Gorsuch was a brilliant pick: His confirmation will be difficult for Democrats to oppose.

Since Trump was elected, Minority Leader Chuck Schumer has said Senate Democrats would oppose any nominee who wasn’t “mainstream.” The propaganda media’s own Rachael Maddow already acknowledged on MSNBC that Gorsuch is a mainstream nominee.

So, immediately after the nomination, Schumer conveniently expanded his “mainstream” requirement to someone who will remain independent on the bench, preserve the rights of Americans, and stand up to the president.

According to one of President Obama’s former Department of Justice appointees, Gorsuch meets those requirements, as well.

In a column in the New York Times written the day Gorsuch was nominated, former Acting Solicitor General Neal Katyal, who was appointed by Obama to fill the vacancy left when Justice Elena Kagan joined the bench, called him, “an extraordinary judge and man.”

“I have no doubt that if confirmed, Judge Gorsuch would help to restore confidence in the rule of law. His years on the bench reveal a commitment to judicial independence – a record that should give the American people confidence that he will not compromise principle to favor the president who appointed him,” Katyal wrote.

Gorsuch is a widely respected, independent minded judge’s judge. How will Schumer continue to say no?

Third, the timing and manner of Gorsuch’s nomination was perfectly Trumpian.

In the last weekend of January, the media was in a total frenzy over President Trump’s executive order to impose a 90-day U.S. travel ban on people from seven nations pending a security review.

This list of nations had been identified as dangerous by the Obama administration. Still, the propagandists in the media immediately labeled the order a ban on Muslims. It simply is not a Muslim ban.

Trump understands the media better than any politician in modern history. He knows the media needs rabbits to chase, or they will make their own rabbits. They were chasing an immigration rabbit to his disadvantage.

So instead of letting the needless furor continue, Trump announced he would move his Supreme Court nomination up two days. As Trump knew they would, the media immediately chased the new rabbit.

Judge Gorsuch is a superb nominee who I’m confident would have made Justice Scalia proud. And Democrats in the Senate who unanimously confirmed him to the federal bench in 2006 presumably agreed. That list includes Senator Schumer, former Senators Barack Obama, Joe Biden, Hillary Clinton and John Kerry, among others.

He will be approved by the Senate.