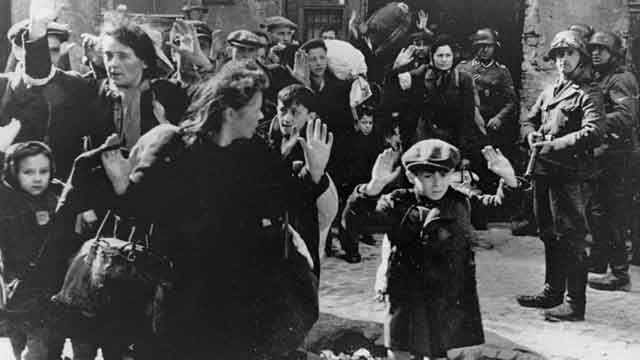 This is a week of historic liberation dates. The most famous is the 75th anniversary of the landing at Normandy on D-Day — June 6, 1944. It was the largest single operation ever undertaken and involved great complexity in timing between airpower, paratroopers, sea power, and massive landings from the English Channel on to the French Coast.

I just dedicated a podcast episode to D-Day and President Franklin Delano Roosevelt’s national prayer, in which he led the entire country into praying for the safety of our young men and women in uniform — and for victory over tyranny.

President Trump will commemorate this historic event with a visit and speech at Normandy on June 6.

GREAT SYNAGOGUE OF WARSAW TO 'REAPPEAR', 76 YEARS AFTER BEING DESTROYED BY NAZIS DURING GHETTO UPRISING

However, there are three other important liberation events this week. The first was the liberation of Rome on June 4, 1944, and the second was the arrival of Pope John Paul II in Warsaw on June 2, 1979. The third happened 10 years after the pope’s visit — the first free elections in the post-war Soviet bloc on June 4, 1989.

The Allies had fought their way up the Italian peninsula in a difficult and deadly campaign. Italian topography lends itself to defense with many mountains and ridges that can be effectively defended. Even after the Italian government switched sides and worked to help the Allies, the Germans were able to maintain a powerful and clever defense that cost many lives.

This is truly a historic week for freedom.

There was always a bittersweet feeling for the veterans of the Italian campaign that the gigantic Normandy landing two days later overshadowed their achievements.

However, on the evening of June 5, 1944, Roosevelt spoke to the nation in a fireside chat and put the liberation of Rome in its proper context. Rome represents a time in history when one nation controlled all the known world. As Roosevelt noted, "the United Nations are determined that in the future no one city and no one race will be able to control the whole of the world."

Roosevelt noted Rome housed temples and churches of many faiths, "but the churches and shrines of Rome are visible symbols of the faith and determination of the early saints and martyrs that Christianity should live and become universal."

Finally, he pointed out that the liberation of Rome was an effort by many nations and peoples:

It is also significant that Rome has been liberated by the armed forces of many nations. The American and British armies — who bore the chief burdens of battle — found at their sides our own North American neighbors, the gallant Canadians. The fighting New Zealanders from the far South Pacific, the courageous French and the French Moroccans, the South Africans, the Poles and the East Indians — all of them fought with us on the bloody approaches to the city of Rome.

Another great anniversary this week involves Pope John Paul II and another moment of great importance for freedom and especially for religious liberty. When Pope John Paul II went to Poland, he was greeted by three million people for an open-air mass in Warsaw. As Callista and I described in a documentary about that trip, "Nine Days that Changed the World," it was this visit which shook the control of the Soviet dictatorship and marked the beginning of the end for the Soviet Empire.

President Trump captured the importance of this trip in a statement from the White House, saying:

In his homily 40 years ago, St. Pope John Paul II delivered a powerful message of hope to the crowd gathered in Warsaw, to all of Poland, and to the world. His words stood tall against the repressive forces of communism throughout Poland and the rest of Europe. He inspired courage in the hearts of millions of men and women to seek a better, freer life.

Today, we celebrate this historic moment and reaffirm our commitment to ensuring that freedom always prevails. The United States and our allies stand united against the shackles of communism and as a beacon of liberty and prosperity throughout the world.

Finally, a decade after Pope John Paul II’s visit, solidarity candidates were widely elected to Poland’s parliament. This was the first free election to be held in Poland since 1928. Solidarity candidates won every seat that could be won under the rules. It was a profound shift away from communism and toward freedom in Poland.

A central symbol of the solidarity movement was actually a poster that featured American actor Gary Cooper from the movie "High Noon." The photo was altered to show Cooper with a solidarity badge and ballot. This showed how deeply connected the Poles felt to the Americans.

This is truly a historic week for freedom, and we should remember all three of these great milestones on the road to religious and political liberty.