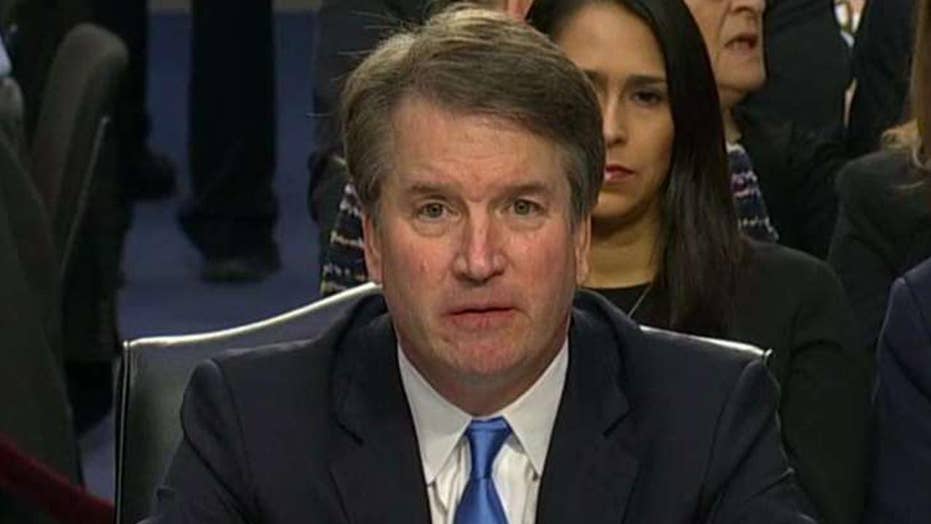 Kavanaugh: First quality of a good judge is independence

The spectacle in the Senate would have made no sense seen from the world we lived in just a few decades ago.

On the first day of the Senate Judiciary Committee hearing for Supreme Court nominee Judge Brett Kavanaugh on Tuesday, 70 people were arrested for disrupting the proceedings. There were more than 40 interruptions by Democratic senators during the first hour of the hearing. Protesters continued to disrupt the confirmation hearing Wednesday.

Committee Chairman Chuck Grassley, R-Iowa, who has served 37 years in the Senate (as well as six years in the U.S. House and 16 years in the Iowa state House) calmly handled the disruptions.

Grassley is a remarkable man who goes home and works on his farm every weekend. He also visits all 99 Iowa counties every year. Grassley is very comfortable with his role, and I expect he found the Democrats amusing and irritating – but not intimidating.

This hostility at the confirmation hearing is a remarkable contrast to the world of 27 years ago, when now-Justice Clarence Thomas was being considered. The Thomas hearings were among the most personal and painful of modern Senate hearings.

Thomas’ personal integrity was challenged in a series of very emotional sessions. He ultimately rose to the occasion, and in a brilliant, powerful, compelling speech compared what was happening to him to a “high-tech lynching.”

As an African American, Thomas said he understood the viciousness being used against him. His personal testimony turned the tide and convinced the Senate to approve him. He went on to become one of the two conservative pillars of the Supreme Court, along with late Justice Antonin Scalia.

The amazing difference between 1991 and 2018 is that despite the viciousness, 11 Democrats voted to confirm Thomas to the Supreme Court. He won confirmation by 52-48. Imagine how unlikely it is that Kavanaugh could get 11 Democrats to vote for his confirmation.

In 2018, bipartisanship has separated, and we are now operating in two competing alternative universes. There is virtually no common ground.

Once you understand that this is a time in which people aren’t playing by the same rules, things become more understandable and the hypocrisy becomes more obvious.

The Democrats causing chaos in the Judiciary Committee have already indicated they were going to oppose Kavanaugh’s nomination. In fact, some Democrats indicated they would vote “no” before President Trump even sent a name up. The reason was simple. In their left-wing universe, anyone acceptable to Trump would be, by definition, unacceptable to them and their allies.

So we had the spectacle of senators complaining that they didn’t have enough time to read all of the material about the nominee – after already saying they would vote against his confirmation.

The ridiculousness of the Democrats’ demand for more material (and simultaneous cries that the process must be slowed) were thoroughly highlighted by both The Wall Street Journal and Investor’s Business Daily.

Investor’s Business Daily pointed out that “it's been 64 days since President Trump nominated Kavanaugh. The average time between nomination and the start of confirmation hearings for the past 10 Supreme Court justices: 41.6 days.”

As to the complaint that senators did not have enough material to review, the Wall Street Journal  asserted in an editorial that “the Senators are ignoring the 307 opinions he has written, and the 17,000 pages of material he provided in response to the committee’s questionnaire – the most extensive ever demanded of a nominee. The Senators have already received more than half a million pages about his time as a lawyer and judge – more documents than were provided for the past five Supreme Court nominees combined.”

So as you watch this political theater being choreographed and performed by the left, just remember that Justice Ruth Bader Ginsburg was confirmed for her seat on the Supreme Court by a 96-3 vote. Justice Stephen Breyer was approved 87-9. Justice Sonia Sotomayor was confirmed 68-31. And Justice Elena Kagan was approved 63-37.

The real test on confirming Kavanaugh will come when the Democratic senators representing states that candidate Donald Trump won in 2016 have to cast their votes.

It is clear that the voters of their states will prefer a “yes” vote, while their left-wing donor base and activists will hate a “yes” vote.

These are the Democrats who are caught between two alternative universes. The next few weeks will be fascinating as we get to watch them maneuver.