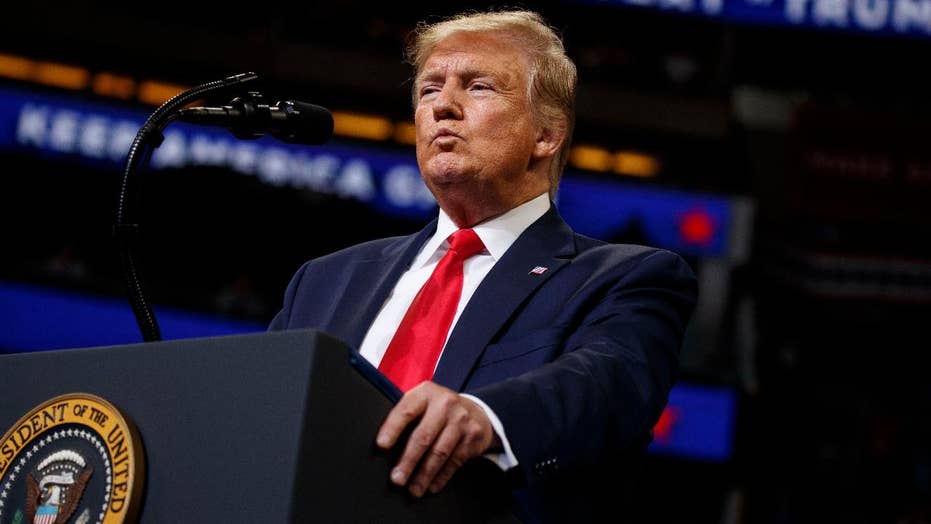 White House hopefuls ramp up their attacks after the president's Orlando reelection rally; reaction and analysis on 'The Five.'

President Trump has an uncanny instinct for slogans that capture the moment. It may come from his years of experience marketing hotels, golf courses, ties, real estate developments, TV shows and other products.

In 2015, he came up with MAGA — Make America Great Again. This motto exactly fit the mood of his supporters and mystified and enraged his opponents.

Conservatives had a deep feeling that America was slipping away. It was the same worry that led to the rise of President Ronald Reagan, the presidential candidacy of Ross Perot in 1992 and 1996, the 1994 Contract with America revolution, and the Tea Party movement.

The feeling encapsulated a deep-rooted fear of the left, an arrogant national establishment, a news media-entertainment elite that expressed contempt for America, and left-wing radical groups committed to undermining and repudiating our nation and its history.

The Trump genius was understanding that a MAGA hat was far more attractive to his supporters than a Trump hat. Other candidates stood for themselves. Trump stood for America.

President Trump hasn’t forgotten this important point. As he said this week in discussing the 2020 election: “Don't ever forget this election is about you. It's about your family, your future and the fate of your country.”

This brilliant co-option of patriotism – and identification of candidacy with country rather than self – enrages and infuriates the left and the establishment.

Now, running for re-election, Trump needs a slogan that sharply draws the contrast with anyone nominated by the Democrats.

Republicans don’t actually have to design a campaign for a specific opponent. Every Democrat running represents the same threat to American values, the same totalitarian intent to impose left-wing values on the rest of us, and the same cavalier disregard of illegal immigration and chaos.

Furthermore, the Democratic candidate is going to be under constant pressure from left-wing activists and left-wing donors to adopt radical proposals supported by the increasingly polarized Democratic Party. These positions will be rejected by the overwhelming majority of independents and Republicans.

As the Rasmussen poll reported on Wednesday, 41 percent of Americans may have a favorable view of socialism – but “most who like the term socialism do not think of it as an economic ideology.”

Finally, a clear majority of Americans of every political persuasion are optimistic about the future of our country, according to the survey.

This combination of a cultural-ideological split and the success of the Trump economic policies will make it possible to imagine a 1972 George McGovern or 1984 Walter Mondale-type disaster for the left.

Keep America Great is a perfect slogan for the emerging Trump campaign. It allows President Trump and Republicans to focus on both the values split and the direct threat left-wing policies and promises represent to American interests.

Just as in 1984, when U.S. Ambassador to the United Nations Jeane Kirkpatrick described the “Blame America First Democrats,” the 2020 campaign will be about the “Undermine America Democrats.”

The Trump-Republican team wants to celebrate the great men and women in American history, while the Democrats want to erase these great Americans from common memory, drive them out of schools, tear down their statues and rename streets.

The Trump-Republican team thinks Americans can be brought together by focusing on the future, creating jobs and higher incomes, and expanding entrepreneurial and technological opportunities. Democrats want to bring Americans together by creating reparations and transferring wealth from people who did nothing wrong to people who can’t prove their right to someone else’s money.

Republicans don’t actually have to design a campaign for a specific opponent. Every Democrat running represents the same threat to American values, the same totalitarian intent to impose left-wing values on the rest of us, and the same cavalier disregard of illegal immigration and chaos.

The Trump-Republican team wants to control the border, modernize legal immigration, end illegal immigration, and prosecute criminals who are here illegally. Democrats favor open borders, want to grant asylum to anyone who can get here, and some now favor free health care for people who enter the country illegally.

Democrats believe sanctuary cities for criminals make sense and oppose effective law enforcement at the border or in our cities. For instance, Rep. Alexandria Ocasio-Cortez of New York this week likened federal officials who enforce our immigration laws to Nazis, and compared the crisis at the southern border to the Holocaust saying: “The United States is running concentration camps at our southern border, and that is exactly what they are. They are concentration camps.”

Ocasio-Cortez was supported by a host of her fellow Democrats, despite criticism from law enforcement and Jewish groups. By contrast, President Trump has long said: “We will not stand for the vile smears, the hateful attacks, and the vicious assaults on the courageous men and women of ICE, and Border Patrol, and law enforcement. We will protect those who protect us.”

The Trump-Republican team opposes killing babies after they are born, favors limiting abortions as the baby grows viable, and would keep the Hyde Amendment, which prohibits using taxpayer funding to pay for abortions. Democrats increasingly favor abortion at any point – including killing babies after birth – and would abolish the Hyde Amendment so taxpayer money could be used to pay for abortion and infanticide.

The choice of a greater America versus a radically different country will be a major part of the 2020 election. Americans may be choosing between “Keep America Great” and “Make America Weak Again.”

Finally, when they compare the Trump economic program with the high-tax, big-government, bureaucratically regulated vision of the Democrats, most Americans will realize they have a lot to lose.

If Democrats drive Latinos back to the unemployment rate and salaries of the last Democratic administration, Latinos will have lost a lot.

In key industrial states, the difference in manufacturing jobs translates into a lot to lose if the Democrats have their way.

It is a dynamic vision around which a potentially surprisingly big majority could be built.