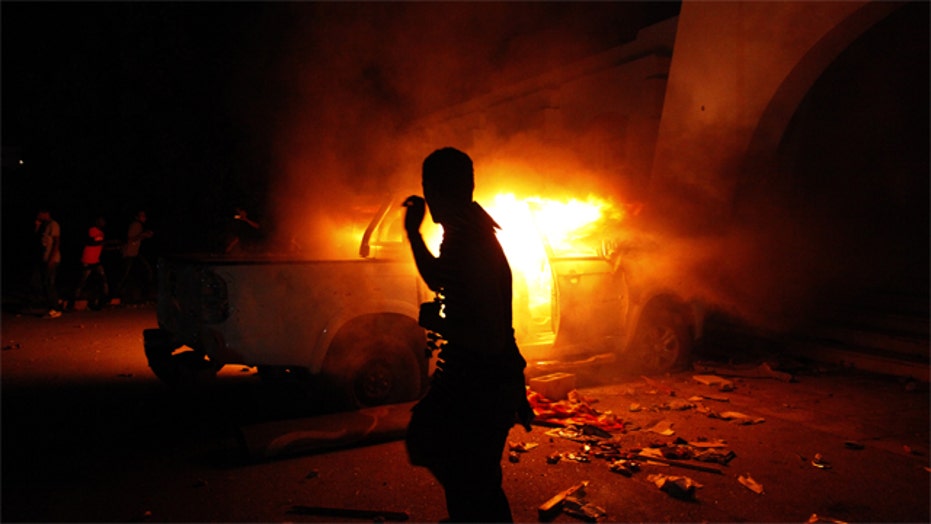 David Kirkpatrick’s December 28 New York Times article “A Deadly Mix in Benghazi” marks a new low for the Times and its shameless cheerleading for the Obama administration.

In the piece, the Times is trying to address one of the main obstacles to a Hillary Clinton presidency: the cover-up of the September 11, 2012 terrorist attack on the U.S. consulate in Benghazi that killed Ambassador Christopher Stevens and three other Americans: Sean Smith, Glen Doherty, and Tyrone Woods.

In an 8,000-word article billed as the result of a lengthy New York Times investigation, Kirkpatrick claims the Times could find “no evidence that Al Qaeda or other international terrorist groups had any role in the assault” on the Benghazi consulate and that the attack “was fueled in large part by anger at an American-made video denigrating Islam.”

These claims are astonishing since the Obama administration long ago backed away from its insistence that the attack on the consulate was not a terrorist attack but a spontaneous demonstration in response to an anti-Muslim video that spun out of control.  (In fairness, I must note that Kirkpatrick admits the attack was not spontaneous although he says it was not “meticulously planned.”)

Kirkpatrick’s article is politically convenient for the Obama administration which continues to be pummeled by Congressional Republicans for refusing to fully cooperate with investigations into the Benghazi terrorist attack and for blocking survivors of the attack from speaking with Congress.

But the article will be especially useful for Hillary Clinton who has been accused of a cover-up of the attack, of not holding anyone at State accountable for how they reacted and security problems at the consulate, and for her infamous comment to Senator Ron Johnson last January: “With all due respect, the fact is we had four dead Americans. Was it because of a protest or was it because of guys out for a walk one night decided to go kill some Americans? What difference at this point does it make?”

The Times knows Clinton’s callous “what difference does it make” statement is a serious political liability and will be repeated again and again in Republican attack ads if she runs for president in 2016.

Kirkpatrick’s article appears intended to provide a narrative that supports her statements and undermines Republican criticism.

To do this, David Kirkpatrick had to engage in some fancy foot work to get around evidence that contradicts Clinton’s statements and find information that supports her.

This was a tall order.

To start, Kirkpatrick’s article is based mostly on interviews with Libyans who he claims had direct knowledge of the attack on the consulate.  None of them admitted involvement in the attack or any affiliation with terrorist groups.

This is hardly a surprise since these Libyan militia members probably fear being arrested or executed over the consulate attack.  Claims by some that the anti-Muslim video was a principal reason for the attack was predictable after President Obama and other senior U.S. officials publicly offered this as the motivation.

According to the article, a central figure in the attack was an eccentric, malcontent militia leader, Ahmed Abu Khattala. Kirkpatrick writes that Khattala was an Islamist but said there is no evidence he had ties to Al Qaeda. But read the article carefully and you can see that there likely are such ties.

Kirkpatrick writes that Khattala said in hours of interviews after he became a suspect in the attack that “he had no connections to Al Qaeda. But he never hid his admiration for its vision.”

The article also says Khattala spent time in prison for Islamist extremism and drove a truck in a convoy in Benghazi in June 2012 flying the black radical Islamist flag.

Kirkpatrick says Khattala had close ties to the radical Islamist militia group Ansar al-Sharia but criticizes Republican claims that this proves a link between the Benghazi terrorist attack and Al Qaeda because Kirkpatrick claims this group is a purely local extremist organization.

Kirkpatrick’s claims about Khattala, Ansar al-Sharia, and Al Qaeda fly in the face about what is known about how Al Qaeda has been operating since 9/11.

To evade intensified Western surveillance and counterterrorism efforts, Al Qaeda is now a decentralized organization operating through loosely-based regional affiliates and franchises.  “Al Qaeda core” in the Waziristan area of Pakistan does not need to officially approve terrorist attacks on Western targets or send personal representatives to oversee them.

It now operates by providing the direction and inspiration for violence to its many global affiliates.

The best evidence of this was made public last August with news of an Internet-based conference call between more than 20 senior Al Qaeda leaders around the world.

It also is worth noting that Al Qaeda leader Ayman al-Zawahiri, in a September 10, 2012 video, called for attacks the next day to avenge the death of his deputy, Abu Yahya al-Libi, by a U.S. drone strike in June 2012.  I believe is no coincidence that Zawahiri’s brother and Egyptian radical Islamist, Mohammed al-Zawahiri, was outside the wall of the U.S. embassy in Cairo on September 11, 2012 while angry mobs tried to storm it.

Kirkpatrick does not mention Zawahiri’s call for violence on September 11, 2012 nor does he discuss how Al Qaeda has changed its method of operations.

Perhaps the biggest flaw of the Kirkpatrick article is that it relies on interviews with Libyans but ignores what many in Congress claim is strong intelligence indicating that Al Qaeda was behind the attack on the consulate.

Even CNN does not agree with Kirkpatrick’s attempt to disassociate Ansar al-Sharia from Al Qaeda.  In a December 5, 2013 op-ed on its website, CNN reporters Paul Cruickshank and Nic Robertson wrote

“Groups sympathetic to Al Qaeda have a significant presence in Benghazi, most notably Ansar al-Sharia, an umbrella group that includes militant outfits suspected of launching the attack that killed four Americans in the U.S. consulate in Benghazi on September 11, 2012.”

What does Kirkpatrick think about specific charges made by Congressmen Rogers, King, Issa and others concerning Al Qaeda’s role in the attack on the Benghazi consulate?

He ignores them except for stating that, “The only intelligence connecting Al Qaeda to the attack was an intercepted phone call that night from a participant in the first wave of the attack to a friend in another African country who had ties to members of Al Qaeda, according to several officials briefed on the call. But when the friend heard the attacker’s boasts, he sounded astonished, the officials said, suggesting he had no prior knowledge of the assault.”

This sounds like Kirkpatrick was shopping around for input from Obama officials who would support his story line.

Why did he not talk to Rogers and other Republicans with a different view?

Why did he not at least present their views?

The reason is clear: Kirkpatrick wanted to avoid including inconvenient facts that contradicted his thesis that the Obama administration’s initial claims about the attacks on the Benghazi consulate were essentially correct.

This is more than sloppy journalism.  It is dishonest political advocacy intended to shore up the 15-month Obama administration cover-up of the attacks on the Benghazi consulate.

It is now clear that Mr Obama and his senior officials repeatedly lied about this being a preplanned terrorist attack so this tragedy would not hurt his re-election chances.

Kirkpatrick and the Times hope articles like this will help protect the legacy of this president and remove this issue from hurting the presidential prospects of Hillary Clinton, whom the Times wants to succeed him.