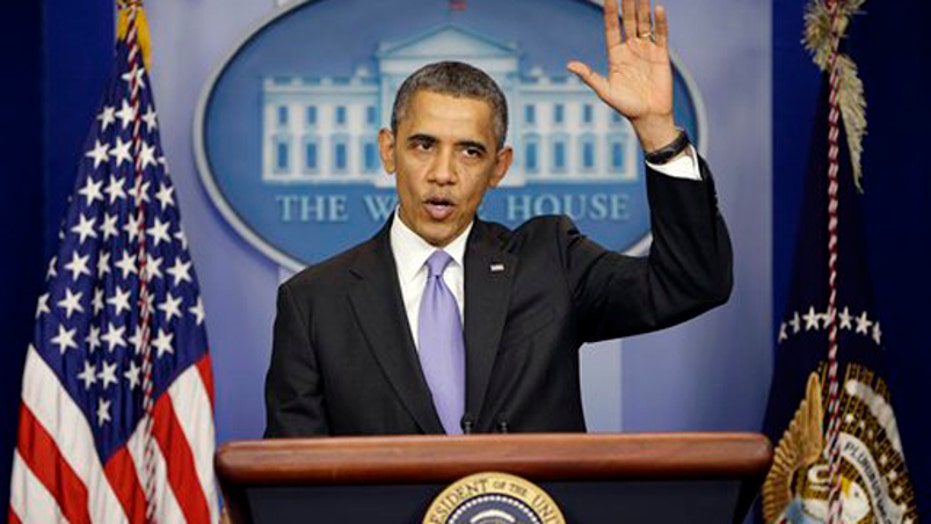 President Obama on the run?

2013 has turned out to be an "annus horribilis" (Latin for horrible year) for President Obama. 2014 will probably be even worse because of the mounting number of self-inflicted wounds caused by administrative failures on everything from ObamaCare to the NSA to Benghazi.

There is a growing sense among Americans outside the Beltway that while President Obama may be a good talker, he is a lousy manager.

It didn’t used to be this way. In their first few years in office, the president and his team looked and sounded great.  Their resumes were littered with Ivy League degrees. They gave terrific speeches, and talked about grand visions for remaking America.  But those words never translated into deeds and when they did, those deeds were disastrous.

What went so horribly wrong?

As with most tragedies, the signs were there from the beginning, it’s just that most people didn’t see them. President Obama and very few of his top advisers had any real world experience. For the first time in history the great majority of cabinet officers were drawn entirely from think tanks and universities and the public sector.  That should have been our wake up call.

Almost none of them had ever built anything.  They had never met production deadlines or had their budgets cut. They had never faced disgruntled employees or been held accountable for products that flopped.  They never learned from experience because the only experience they had was in the world of theory and hypotheses.

If the car your company makes is a lemon, you take the loss, redesign it, and manufacture a new model. At a think tank if your theory didn’t work out, you can write a new book with a new theory. President Obama and his team didn’t understand the age-old expression, ‘it’s not what you say it’s what you do that counts.’

When I was the Pentagon speechwriter in the 1980's writing defense speeches for President Reagan, I would send out drafts of speeches in advance to  various department heads for comment.

Most of the Pentagon’s senior military and civilian leaders would look for inaccuracies in what I had written and offer corrections. But the Secretary of the Navy, John Lehman, was different. He would always try to sneak in a line or two about a 600 ship navy.

We didn’t have a 600 ship navy, of course, but Lehman wanted one, and he knew if President Reagan ever uttered the magic words, "600 Ship Navy," in a speech Lehman could take it from there and build a 600 ship navy.

Lehman understood a fundamental principle of government bureaucracy. Get the boss to say something, and then work behind the scenes to make it happen.

I used to imagine Lehman in those long and boring budget meetings arguing with Defense Department  numbers crunchers about the essential presidential mission of a 600 ship navy.

If they said, ‘sorry the budget doesn’t allow for a 600 ship navy because we need to devote those resources to building more tanks or aircraft, Lehman would answer,  "Well, the president didn’t say how many tanks or airplanes we need, but he did say very clearly that he wanted 600 ships."

I had visions of Lehman waiving those speeches in front of those Pentagon accountants, daring them to defy President Reagan.

But it didn’t stop there.  Lehman knew the first step was to get the funding, but the next step was to build the ships. He had to make sure the shipbuilding program didn’t have massive cost overruns, that the ships were built to specification and delivered on time.

So Secretary Lehman reformed the procurement program and pushed for fixed price contracts, penalties if the ships were late and bonuses if they came in early.  In the end, the United States got a 600 ship navy, and it was instrumental in our winning the Cold War.

The problem with President Obama is he doesn’t have any John Lehmans.  He makes great speeches, but that’s where it stops.  Behind the scenes there are no competent officials turning words into deeds.  There’s no follow through.  No implementation. No penalties if something doesn’t work or deadlines aren’t met. There are also no rewards for success.  Nobody is held accountable.

Why? Because in ObamaWorld, nothing really goes wrong for long. Everything is a small bump in the road, a temporary inconvenience, a glitch caused by some low level bureaucrat.  All that’s needed is better P.R., spin and messaging. In the Reagan administration a great speech was just the first step in a long process. In the Obama administration it's the only step.

But words don’t translate into deeds. In the classic movie, “The Ten Commandments” Pharaoh says, “So let it be written, so let it be done.”  But that didn’t work out too well for Pharaoh, and it hasn’t worked any better for Obama, either.

In the real world words don't automatically translate into deeds.

They may move public opinion polls -- temporarily.  They may convince the slavish and gullible Washington press corps, which despite all evidence to the contrary, still takes anything Obama says as gospel.

But a few good speeches don’t redirect the large, cumbersome, redundant ship of state to change course.  They don’t get websites built, or balance budgets, or rein in unaccountable bureaucracies.  They don’t build 600 ship navies.

So far, the administration’s bad management has touched very few Americans directly.  But health care will be the straw that broke the camel’s back, because it affects every one of us.

We don't need the filter of the media to tell us what to think about our health care system, we're experiencing it first hand. We will know it when our premiums rise, our doctors are no longer available, our prescription prices double.  And just wait until the lack of website security leads to large scale identify theft for participants.

They will only be solved when the president and his advisers make some course corrections.

But, I predict they won’t. Frankly, they probably can’t.

The problem with people who live in a world of speeches and books and theories is they don’t know how to fix things in the real world when they go wrong. They feign ignorance, blame others, and make another eloquent speech. That's bad for the president and really bad for the country.