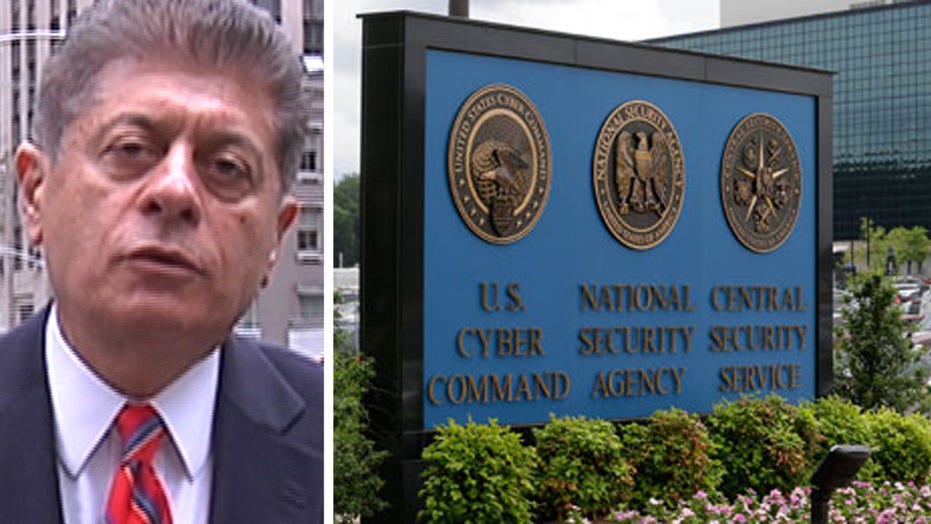 Judge Napolitano's Chambers: Judge Andrew Napolitano explains how a secret court in Washington D.C. gave permission for the NSA to release our phone calls and emails to the FBI, skirting the fourth amendment

Would all of our lives be safer if the government could break down all the doors it wishes, listen to all the conversations it could find and read whatever emails and text messages it could acquire? Perhaps. But who would want to live in such a society?

To prevent that from happening here, the Framers ratified the Fourth Amendment, which is the linchpin of privacy and was famously called by Justice Louis Brandeis “the right to be let alone -- the most comprehensive of rights and the right most valued by civilized men.” He wrote those words in his dissent in the first wiretapping case to reach the Supreme Court, Olmstead v. United States, in 1928.

Roy Olmstead had been convicted for bootlegging on the basis of words he used in overheard telephone conversations. Because he had used a phone at his place of work that the government had tapped without breaking and entering his workplace, the high court ruled -- despite the fact that the government had not obtained a warrant -- that he had no right to privacy. Brandeis dissented.

Over time, the Brandeis dissent became the law. The Fourth Amendment, which protects the privacy of all in our “persons, houses, papers, and effects,” was interpreted to cover telephone conversations and eventually emails and text messages. So today, if the government wants information contained in those communications, it needs to obtain a search warrant, which the Fourth Amendment states can only be given by a judge -- and only upon a showing of probable cause of evidence of a crime contained in the communications it seeks.

If the government does not obtain a search warrant and listens to phone conversations or reads emails or text messages nevertheless and attempts to use what it heard or read to acquire other evidence or directly in the prosecution of a defendant, that is unlawful. That type of information is known as the fruit of the poisonous tree.

Now comes the super-secret court established by the Foreign Intelligence Surveillance Act, reaffirmed by Congress last year under the so-called USA Freedom Act. Beware the names of federal statutes, as they often produce results that are the opposite of what their names imply; and this is one of them.

Congress has unconstitutionally authorized the FISA court to issue search warrants on the basis of governmental need -- a standard that is no standard at all because the government can always claim that it needs what it wants. The FISA court does not require a showing of probable cause for its warrants, because it accepts the myth that the government is listening to or reading words by foreign people for foreign intelligence purposes only, not for prosecutorial purposes.

Never mind that Congress cannot change the plain meaning of the Constitution. Never mind that the Fourth Amendment protects all people in the United States, American or foreign, from all parts of the government for all purposes, not just criminal prosecutions.

Yet the FISA court still grants general warrants -- look where you wish and seize what you find -- exposing our innermost thoughts to the prying eyes of the intelligence community in direct contravention of the Fourth Amendment.

Enter the USA Freedom Act. One of its selling points to Congress was that it would permit the FISA court to appoint a lawyer to challenge hypothetically some of its behavior. The court recently made such an appointment, and the lawyer appointed challenged the policy of the National Security Agency, the federal government’s domestic spying agency, of sharing data it acquires via the unconstitutional FISA warrants with the FBI. She argued that the data sharing goes far beyond the stated purpose of the FISA warrants, which is to gather foreign intelligence data from foreign people, not evidence of domestic crimes of anyone whose emails might be swept up by those warrants.

The challenge revealed publicly what many of us have condemned for years: The NSA actually makes its repository of raw data from emails and text messages available for the FBI to scour at will, without the FBI's obtaining a warrant issued by a judge pursuant to the Fourth Amendment.

In an opinion issued in November but kept secret until last week, the FISA court rejected the hypothetical challenge of its own appointee and ruled that the NSA could continue to share what it wants with the FBI.

There are several problems with this ruling. The first is the hypothetical nature of the challenge. Federal courts do not exist in a vacuum. They do not render advisory opinions. They can only hear real cases and real controversies involving real plaintiffs and real defendants, not hypothetical ones as was the case here.

The whole apparatus of hypothetical challenge and hypothetical ruling is constitutionally meaningless. It was the moral and legal equivalent of a law school moot court oral argument. Yet federal and soon state law enforcement will interpret it as giving cover to the NSA/FBI practice of data sharing, which is clearly unconstitutional because it is the use of fruit from a poisonous tree.

FISA and the USA Freedom Act were enacted under the premise -- the pretense -- that the data collected under them would be used for foreign intelligence purposes only so that attacks could be thwarted and methods could be discovered. Yet the use by the FBI of extraconstitutionally obtained intelligence data for ordinary criminal prosecutions defies the stated purposes of the statutes and contradicts the Fourth Amendment.

If this is keeping us safe, who or what will safeguard our freedoms? Who will keep us safe from those who have sworn to uphold the Constitution yet defy it?