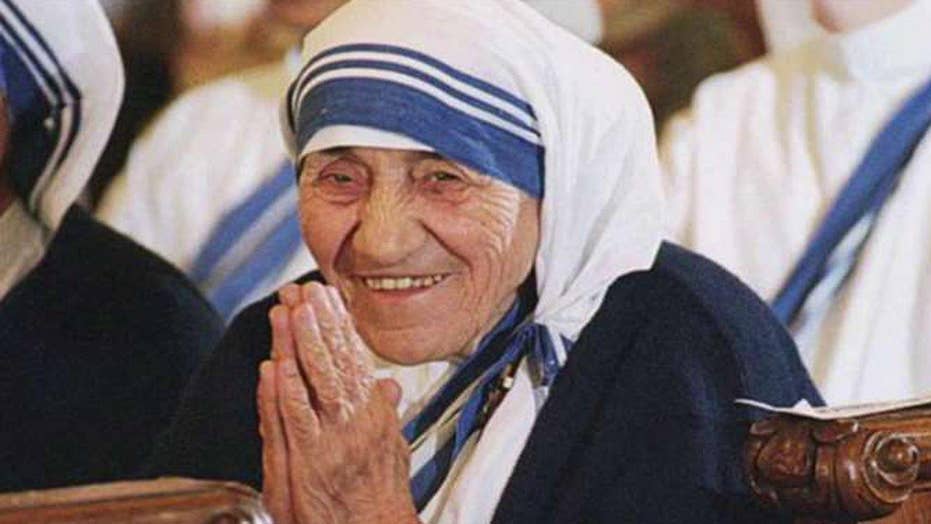 There is no mercy from a distance, because there is no friendship from a distance.  It is fitting that Mother Teresa is being canonized in the Jubilee Year of Mercy declared by Pope Francis.

It is hard not to believe that John Paul, in first beatifying her, and now Francis in canonizing her, aren’t very deliberately putting her before the world as THE saint of mercy for our time.

A saint is an exemplar of holiness for others. The processes of beatification and canonization do not make a saint, but recognizes the spectacular holiness of someone as a model for how to love God above all else and one’s neighbor in God through Christ.

It is Christ who makes saints through the gift of grace that overflows from them into the lives of those who suffer.

A saint is an exemplar of holiness for others. The processes of beatification and canonization do not make a saint, but recognizes the spectacular holiness of someone as a model for how to love God above all else and one’s neighbor in God through Christ.

Mother Teresa was just such a person, loving God above all else and her neighbor in God.

“But who is my neighbor?”

It is a constant of Pope Francis’ teaching that genuine mercy is expressed only by going out to those who suffer -- to assist them -- motivated by acknowledging that, like the Good Samaritan, those who suffer are our neighbors; it is they who are our greatest friends.

We often think charity means doing good things for the poor, but in a way that does not require that we befriend them.

However, caritas, as Pope Benedict reminded us, is first and foremost the love we bear for God and our neighbor in God.  But you cannot love from a distance.

I may be able to do a “good work” from a distance, never actually seeing those I assist, never coming to know them, never befriending them.  But the Church insists you cannot be merciful if you do not see, touch, smell, and hear the cry of the poor—literally hear it, whatever their poverty is, financial, moral, or spiritual—there is no mercy from a distance because there is no love from a distance.

Mother Teresa’s life was a life lived in pursuit of closing the distance between herself and Christ’s poor.

Her mother provided the first model of this closing the distance, inviting the poor of their town in Albania to eat with them in her home, saying to her daughter “my child, never eat a single mouthful unless you are sharing it with others.”

She joined the Sisters of Loreto, taking a vow of poverty and teaching in a high school to educate the children of the poorest families of Calcutta.

But after twenty years of teaching she heard Christ calling her to even greater union with the poor—those who were starving, dying in the streets, castaways of society living amongst us, the “poorest of the poor.”  To be friends with Christ meant for her to be friends with them, and she literally left no distance between herself and them.

This is what she showed us. If the poor and suffering cannot come into one’s house -- as her mother had invited them to do -- then one goes out to their streets.

This, as Pope Francis has proclaimed over and over again is mercy. And mercy does not wait for those who suffer to come to it, and it does not do good works from a distance; it leaves the safety and comfort of the Church walls, goes to those who suffer and embraces them as friends and neighbors.

There is no honor the Church can bestow on Mother Teresa in canonizing her. Her great honor was to love Christ and his beloved poor.

The model of her life poses for us the question: what suffering and poverty do we ignore right in front of our eyes?

She is a saint for those who have eyes to see that there is no mercy from a distance.

John O'Callaghan associate professor of philosophy at the University of Notre Dame. He is a permanent member of the Pontifical Academy of St. Thomas Aquinas and former president (2012-13)of the American Catholic Philosophical Association.