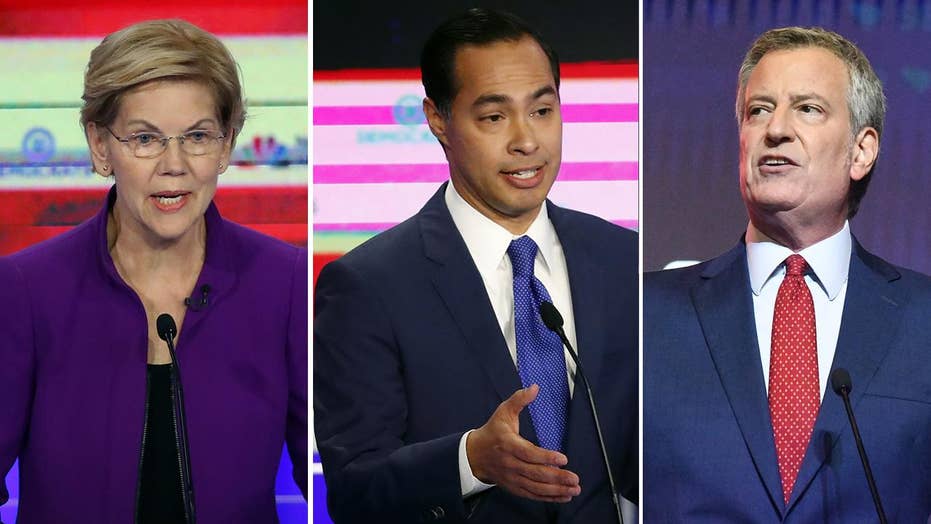 Did you hear that? Something sounded awfully familiar during the Democrats’ first presidential debate in Miami.

"If they can save a nickel by moving a job to Mexico, or to Asia, or to Canada, they’re going to do it," Sen. Elizabeth Warren, D-Mass., complained when discussing the way American companies ship jobs over the border or overseas. "We need to say, ‘any corporation can come and use that research, they can make all kinds of products from it, but they have to manufacture right here in the United States of America."

Warren is trying to get into the top tier of Democratic candidates after being denied the right to face off against the big boys — Biden and Bernie — Thursday night.

Other observations from the Democratic debaters Wednesday night sounded familiar, as well.

Rep. Tim Ryan, D-Ohio, told a well-worn campaign trail story about his family members being made to pack up factory machinery in boxes to be shipped to China. He lamented that, after "tax cuts" and "bailouts," General Motors has "the audacity to move a new car they’re going to produce to Mexico."

Where have we heard this stuff before?

Back in 2015 and 2016, candidate Donald Trump relentlessly beat the exact same drum the Democrats beat Wednesday night. Every day on the campaign trail, he expressed his outrage at the outsourcing of American manufacturing.

Trump told stories of closed factories, jobs outsourced overseas, and the forgotten working men and women of America. He promised to get America back to work again.

So what’s the difference between Trump and the armchair Democratic “presidents?”

The difference is that the Democrats are only talking about it, but President Trump has already done it.

Job creation? He’s already done it! Trump has overseen the creation of no fewer than 5.4 million new jobs in the last two-and-a-half years, and that trend shows no signs of stopping.

These Democrats want to end the scourge of unemployment? The unemployment rate is already 3.6 percent! Four of these candidates weren’t even alive in 1969, which is the last time America had such low unemployment. A fifth candidate, Sen. Cory Booker, D-N.J., was born that very year.

The Democratic candidates want to bring manufacturing back to the American heartland and raise wages? President Trump already did it. After decades of decline — largely because previous presidents refused to do anything to stop unfair, subsidized competition from totalitarian foreign countries such as China — our factories have added hundreds of thousands of jobs and increased wages.

For the first time in a generation, American manufacturing is resurgent. It has a future, and the trade, immigration, environmental, and regulatory policies of the Trump administration made that happen.

These "faux-Trumpian" Democrats can go ahead and try to steal the president’s platform if they want. All they have are focus group-tested talking points, but Trump promised all those same things in 2016 — and he’s actually delivered results to the American people.

Donald Trump had a concrete plan to stop foreign cheaters from exploiting our companies, stop Washington regulators from strangling innovation, and stop cheap illegal immigrant labor from sapping wages — and he’s done all of that.

All Tim Ryan can do is make a spectacle out of General Motors closing a plant. But he neglects to mention that even in this case, some of that employment will be saved by a new high-tech manufacturing operation that is moving into the space, thanks to the pressure President Trump placed on General Motors to sell the plant to a company that can still use it and still employ thousands of employees who depend on it to provide for their families.

These "faux-Trumpian" Democrats can go ahead and try to steal the president’s platform if they want. All they have are focus group-tested talking points, but Trump promised all those same things in 2016 — and he’s actually delivered results to the American people.

That familiar sound we heard at the debate was that of candidates who are four years behind the man who is already creating jobs and reviving America. They’re simply too late. President Trump is already getting the job done.