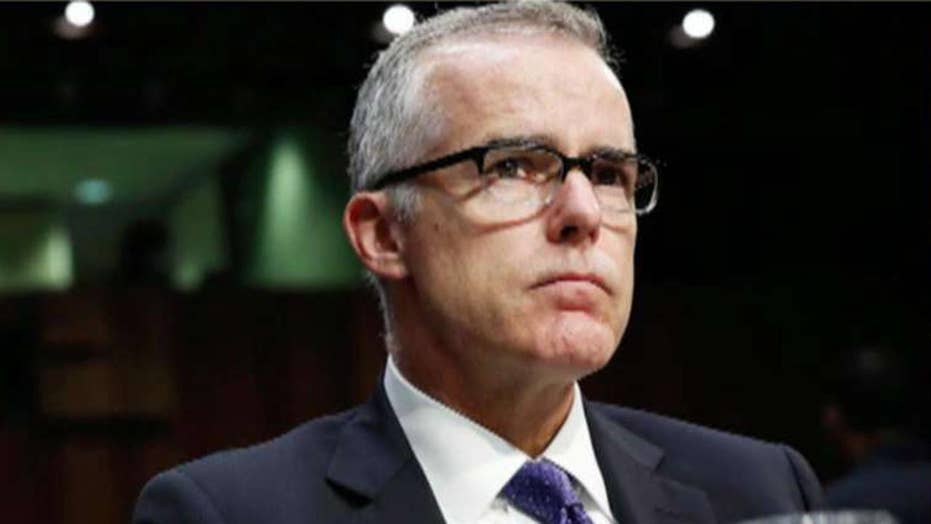 Disgraced former FBI Deputy Director Andrew McCabe has now admitted in his new book that he ordered obstruction of justice and counterintelligence investigations of President Trump in retaliation for Trump’s firing of FBI Director and McCabe friend James Comey.

McCabe was briefly serving as acting director of the FBI at the time he ordered the investigations of the president in May 2017. But he had no evidence whatsoever that President Trump had engaged in any wrongdoing involving dealings with Russia.

Former FBI lawyer Lisa Page admitted during a closed-door congressional interview that when McCabe ordered the investigations “we still couldn’t answer the question…. It still existed in the scope of possibility that there would be literally nothing” to connect Trump with Russia.

MICHAEL GOODWIN: ANDREW MCCABE IS A NATIONAL DISGRACE – AND WE OWE HIM A BIG, FAT THANK YOU

That same month, former FBI counterintelligence chief and Russia probe leader Peter Strzok texted Page about his reluctance to join Special Counsel Robert Mueller’s investigation of whether Trump or his associates conspired with Russia during the 2016 presidential campaign to help Trump get elected.

“My gut sense and concern is there’s no big there, there,” Strzok confessed to Page, with whom he was having an extramarital affair at the time.

Undeterred, McCabe launched what amounts to an attempted coup to try to overturn the results of the presidential election that put Trump in the Oval Office.

McCabe, Strzok and Page had long sought to prevent the American people from making Trump president of the United States.

On August 15, 2016, McCabe convened a private meeting in his office with Strzok and Page. Later that day, Strzok wrote to Page: “I want to believe the path you threw out for consideration in Andy’s office – that there’s no way he gets elected – but I’m afraid we can’t take that risk. It’s like an insurance policy in the unlikely event you die before you’re 40.”

But the three conspirators failed to prevent the American people from electing Trump president. So McCabe hatched a new scheme.

In an upcoming interview with “60 Minutes” on CBS, McCabe recounts how he attempted to recruit Cabinet members to oust the president from office using the 25th Amendment to the Constitution, which empowers a majority of the Cabinet and the vice president to remove the president should be he “unable to discharge the powers and duties of his office.”

The unconstitutional power grab failed to gain any momentum. President Trump, after all, was not incapacitated. Conspicuously absent in the text of the 25th Amendment is any language empowering the deputy director of the FBI to overturn a presidential election because he disapproves of the result.

When that plan stalled, McCabe considered asking Deputy Attorney General Rod Rosenstein to secretly record his conversations with President Trump in order to entrap the president in some crime – any crime.

When all else failed, McCabe told “60 Minutes” he focused his efforts on making the investigations into Trump-Russian collusion “indelible” lest he be “removed quickly or reassigned or fired.” McCabe’s firing later came to pass when the Justice Department inspector general discovered that McCabe had leaked to the media and lied to investigators.

Last April the inspector general referred his findings on McCabe to the U.S. attorney’s office for possible criminal prosecution. This week McCabe hit the airwaves to brag about his actions and plug his political tell-all book.

The framers of our Constitution organized our republic as they did in large part to thwart petty tyrants like Andrew McCabe. Sadly, that carefully constructed system of checks and balances has broken down, and McCabe smiles for the cameras when he ought to be frowning behind bars in an orange jumpsuit.