Mark Penn: Rep. Nadler is not the supreme power of the nation

He represented his views with honor and dignity whether in the majority or the minority. He called the impeachment of President Bill Clinton in 1998 “a partisan railroad job.”

Today he has become the conductor of his own “railroad job” that is over the top and embarrassing us all. Congress has about a 20 percent approval rating and Nadler is doing his part to keep it that low. 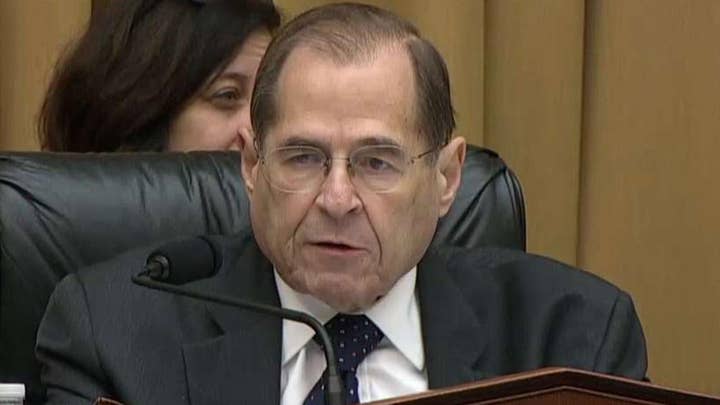 After Attorney General Bill Barr did not show up for his hearing on Thursday because Nadler wanted to question the A.G. in a manner reserved for inquests and investigations, Nadler then called the president a “dictator.”

The Mueller report should have closed down investigations of the president, not opened them up. It unambiguously cleared the president of any conspiracy or collusion with the Russians, ending two or more years of undermining the president and his family with unfair and unjust criminal investigations.

I understand that Nadler is upset about the refusal of the A.G. to participate in some kind of show trial he was arranging after 5 hours of Barr’s testimony before the Senate, but to the extent anyone is acting like a dictator here it’s unfortunately Nadler. He has lost all perspective.

Nancy Pelosi then piled on as well calling the Attorney General a criminal. You may or may not like Barr’s demeanor, answers or his summary of the Mueller report, but he is no criminal nor does he deserve this kind of unrestrained disrespect. It’s really hard to understand why Nadler or Pelosi believe this kind of personal vitriol will be rewarded at the ballot box. The evidence is that similar behavior during the Senate hearings of Supreme Court Justice Brett Kavanaugh may have cost Democrats several U.S. Senate seats. For presidential candidates wooing Iowa voters, over the top words and behavior at least makes some political sense. But Nadler and Pelosi should know better.

Nadler, representing a safe district without any serious challenge, is acting like someone anointed him king, and that all executive branch officials should bow down and kowtow to his ever-increasing demands.

Legislative oversight is not a specifically enumerated power in the Constitution — it’s a limited power implied from the “necessary and proper” clause and subject to privileges, separation of powers, and the need for a legitimate legislative purpose. It’s not an open-ended power but bounded by the checks and balances of our constitution.

The Mueller report should have closed down investigations of the president, not opened them up. It unambiguously cleared the president of any conspiracy or collusion with the Russians, ending two or more years of undermining the president and his family with unfair and unjust criminal investigations. There is nothing more distracting for an administration than to be under independent counsel investigation and I should know, I was there in 1998 when President Clinton was impeached.

Instead, Nadler‘ s response has been to begin a coordinated plan with other Democratic committee chairs to subpoena every tax, business and other records of the president, his family, and his businesses and associates.

Now that kind of inquisition is exactly what dictators do, especially when they are trying to use their power to destroy their political opponents.

There is not a smidgen of bipartisanship in any of his actions and so the precedent it sets could be the most destructive congressional behavior since Joe McCarthy discovered he could use and abuse the investigative process for political gain.

No matter how good our Constitution, it requires people to operate out of good faith.

Former FBI Director James Comey joined the over-the-top gang with his new op-ed that said that Trump destroys people a bit at a time. Comey, however, was quite capable of destroying himself before Trump was elected with his intrusions into 2016 campaign that managed to anger just about everyone and was declared improper by the DOJ inspector general.

Hillary Clinton, on Rachel Maddow’s MSNBC show the other night, joked that if the Russians were helping Trump that the Chinese should now help the Democrats. At least this was civil in tone and kind of an attempt at parody. Clearly, she forgot that the original foreign-help scandal was in fact Chinagate in 1996-8 in which China poured millions of dollars into the DNC to help the Democrats. In that investigation, it was found that China was, in fact, making illegal campaign contributions and multiple indictments were handed down.

I’m all for a good political fight over the issues, but the politics of personal destruction is hindering our democracy; the lack of respect for opponents across the aisle is furthering the deep divisions in this country.

Our political system is being weaponized against itself. Our elections have to settle our differences not exacerbate them and investigations have to have an end not be endless.