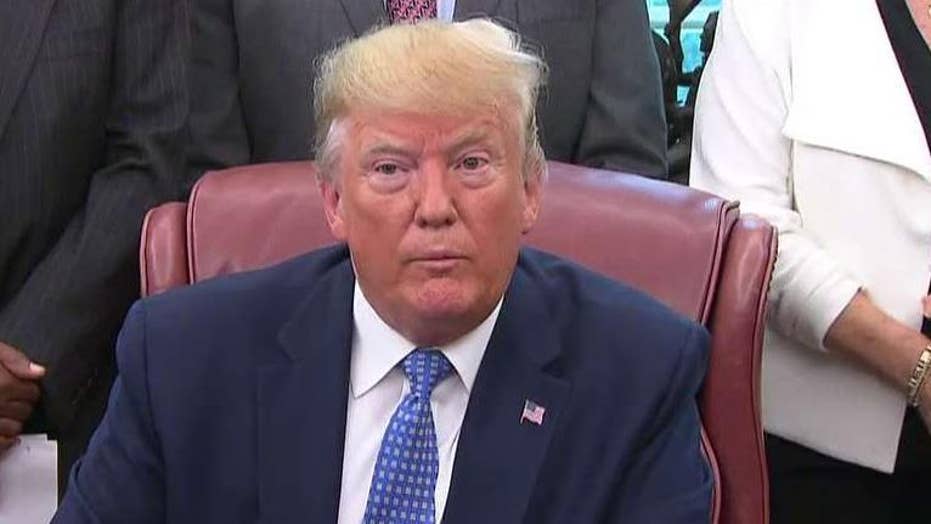 President Trump: You're not going to need an exit strategy for Iran

Trump urges the Iranian people get ready of the 'hostility' from their country's leadership.

After President Trump called off a military strike on Iran for its downing of a U.S. military drone, some compared his decision to President Obama's shameful failure not to enforce his "red line" in Syria.

Sorry, the two situations are completely different. Trump was right to show restraint, and his Iran policy is working.

Unlike the Syrian regime, which used chemical weapons on civilians in direct defiance of Obama's threat to use military force, the Iranian regime did not cross any "red line" drawn by the Trump administration.

Secretary of State Mike Pompeo rerportedly sent a private warning to Iranian leaders in May "that any attack by Tehran or its proxies resulting in the death of even one American service member will generate a military counterattack." Pompeo has publicly said such a strike "would likely take place in Iran itself" and has even held up Obama's failure to strike Syria, and Trump's subsequent decision to do so, as evidence that Trump would not hesitate to act.

While Trump tightens the economic screws on Tehran, military action is not off the table. The fact that Trump was moments away from ordering a military strike should serve as a warning to Tehran.

Yes, Iran's leaders did see. It is no mere coincidence that they have been careful not to cross Trump's red line. They attacked Japanese and Norwegian oil tankers, not American ones. They shot down an unmanned U.S. drone, not a manned American P-8 that was reportedly flying in the area. (Trump called that "a very wise decision.")

Trump would have been well within his rights to strike Iran in response to these acts of war. But Trump knows he does not have to prove willingness to use force, which he has demonstrated twice in Syria.

He also knows Iranian leaders are lashing out because they are buckling under the weight of the unprecedented sanctions he has imposed. Iran's oil exports have dropped from 2.5 million barrels per day in April 2018 to just 300,000 barrels per day this month — an 88 percent reduction. The State Department estimates that oil sanctions alone will deny the regime $50 billion in revenue, or 40 percent of Iran's annual budget.

Thanks to Trump's "maximum pressure" campaign, Iran's economy is contracting, inflation is spiraling, and it has been forced to cut funding for its terrorist proxies Hezbollah and Hamas, the Iranian military and the Islamic Revolutionary Guard Corps (IRGC).

Iran's goal is to get that pressure lifted. So instead of striking back militarily, Trump struck back economically. On Monday, he announced even more sanctions — targeting several IRGC leaders, as well as Foreign Minister Mohammad Javad Zarif, and supreme leader Ayatollah Ali Khamenei's office — that Treasury Secretary Steven Mnuchin said would "lock up literally billions of dollars more of [Iranian] assets." That will hurt Tehran far more than a limited military strike ever would have.

It also undermines Iran's objective of dividing the United States from its allies. Tehran is trying to send a message that Trump caused this escalation by imposing sanctions and pulling out of Obama's nuclear deal -- and that things will get worse if the allies don't get the United States to back off. But Iran's actions, combined with Trump's restrained response, are having the opposite effect — strengthening the case for sanctions and allied unity.

By not taking the bait, Trump has shown that all the escalation is on the Iranian side. Trump can now tell our reluctant allies: Iran has to be punished for its blatant violations of international law. Iran can be punished militarily or financially — which do you prefer?

If anything, he should be using this incident to push allies to impose tough sanctions of their own. After all, Iran just launched an unprovoked attack on a NATO ally. Not long ago, allies were lecturing Trump about the importance of Article 5 of NATO charter, which says that an attack on one NATO member is an attack on all. Where is their commitment to Article 5 now?

While Trump tightens the economic screws on Tehran, military action is not off the table. The fact that Trump was moments away from ordering a military strike should serve as a warning to Tehran. "I think a lot of restraint has been shown by us, but that doesn't mean we're going to show it in the future," Trump said Monday.

His message was clear: Iran got one free pass; it may not get another.