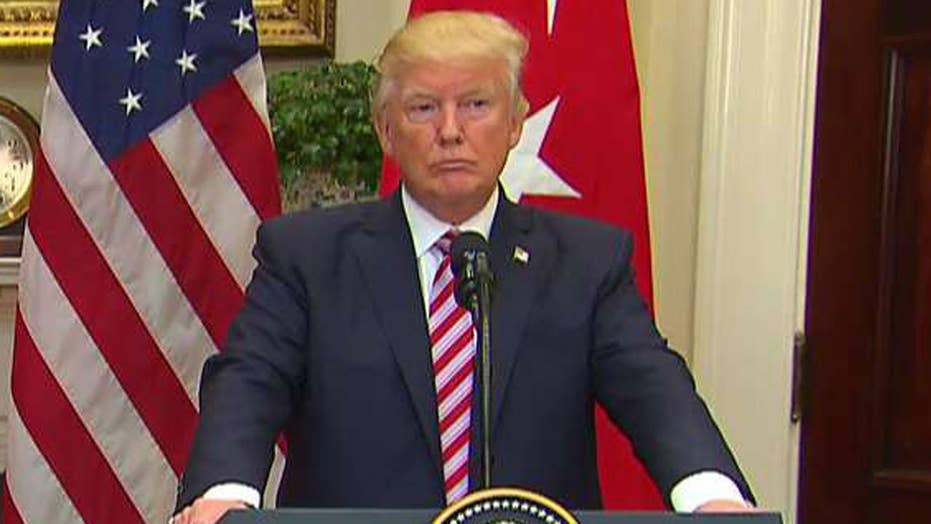 Editor's note: The following column is adapted from a column which originally appeared on AEIdeas.org, the blog of the American Enterprise Institute.

The media are in a froth over reports that President Trump revealed sensitive intelligence from a liaison partner to the Russian foreign minister and Russian ambassador.  The New York Times reports:

President Trump boasted about highly classified intelligence in a meeting with the Russian foreign minister and ambassador last week, providing details that could expose the source of the information and the manner in which it was collected, a current and a former American government official said Monday. If true, the disclosures, which appear to be inadvertent, are indeed a disaster.

The intelligence disclosed by Mr. Trump … was about an Islamic State plot, according to the officials. A Middle Eastern ally that closely guards its own secrets provided the information, which was considered so sensitive that American officials did not share it widely within the United States government or pass it on to other allies….

Sharing the information without the express permission of the ally who provided it was a major breach of espionage etiquette, and could jeopardize a crucial intelligence-sharing relationship. In fact, the ally has repeatedly warned American officials that it would cut off access to such sensitive information if it were shared too widely, the former official said. In this case, the fear is that Russia will be able to determine exactly how the information was collected and could disrupt the ally’s espionage efforts.

What the Times describes, if true, is indeed a disaster.

But it’s hard to take seriously their sudden concern over the “disaster” of exposing sources and methods – including the identity of intelligence partners – from the same news outlets that regularly, and intentionally, published highly classified intelligence in recent years, based on leaks from the Obama administration.

The Times and other news outlets regularly published “disastrous” stories which damaged U.S. national security and exposed the involvement of U.S. partners.

Where was the outrage when The New York Times exposed the US government’s cyberattack on Iran’s nuclear program, including the fact that Obama personally ordered cyberattacks on the Iranian nuclear program using a computer virus called Stuxnet?  The Times cited as sources “members of the President’s national security team who were in the [Situation Room]” and even quoted the president asking during a top secret meeting: “Should we shut this thing down?” Only Obama’s most trusted national security advisers would have been present when he uttered those words.  One of those advisors shared highly classified intelligence with the Times.

The Stuxnet leak exposed intelligence sources and methods, including the top secret codename for the program (“Olympic Games”) and the involvement of a US ally, Israel. At one point in the Times story, a source says the Israelis were responsible for an error in the code which allowed it to replicate itself all around the world. The Times directly quotes one of the president’s briefers telling him, “We think there was a modification done by the Israelis,” adding that, “Mr. Obama, according to officials in the room, asked a series of questions, fearful that the code could do damage outside the plant. The answers came back in hedged terms. Mr. Biden fumed. ‘It’s got to be the Israelis,’ he said. ‘They went too far.’”

Where was the concern for the exposure this intelligence or the involvement of our liaison partner?  The damage this leak did — both to the operation and the trust between our two countries — is incalculable.

What about The New York Times story in 2014 revealing that the National Security Agency had developed the capability to access computers that are not connected to the Internet?

According to the Times, the NSA uses “a covert channel of radio waves that can be transmitted from tiny circuit boards and USB cards inserted surreptitiously into . . . computers” or in some cases “a briefcase-size relay station that intelligence agencies can set up miles away from the target.”  The Times reported that, “There is no evidence that the NSA has implanted its software or used its radio frequency technology inside the United States.” And the NSA confirmed that the “NSA’s activities are focused and specifically deployed against — and only against — valid foreign intelligence targets.”

Or how about the disclosure of classified operational details of the raid that killed Osama bin Laden, including the identity of the Pakistani doctor who helped us track down bin Laden?  ABC News reported that:

The Pakistani doctor who aided American intelligence in its mission to kill Osama bin Laden has been convicted of high treason in his home country and sentenced to 33 years in prison plus a fine, Pakistani officials said today.

Indeed, he is still rotting in a Pakistani prison to this day.  Did his exposure by Obama officials bragging about the president’s accomplishment have a chilling effect on intelligence cooperation? You bet.

Or how the Obama administration’s shameful exposure of the role of a double agent recruited in London by British intelligence in breaking up a new underwear bomb plot in Yemen?  The Guardian reported at the time:

Detailed leaks of operational information about the foiled underwear bomb plot are causing growing anger in the US intelligence community, with former agents blaming the Obama administration for undermining national security and compromising the British services, MI6 and MI5.

The Guardian has learned from Saudi sources that the agent was not a Saudi national as was widely reported, but a Yemeni. He was born in Saudi Arabia, in the port city of Jeddah, and then studied and worked in the UK, where he acquired a British passport.

Mike Scheur, the former head of the CIA’s Bin Laden unit, said the leaking about the nuts and bolts of British involvement was despicable and would make a repeat of the operation difficult.

And what about the Times story exposing the fact that then-Libyan Prime Minister Ali Zeidan allowed the United States to carry out a special operations raid in Tripoli that captured a senior al-Qaeda leader, Nazih Abdul-Hamed al-Ruqai, known as Abu Anas al-Libi?  In a front-page story, “US Officials Say Libya Approved Commando Raids,” the Times reported that:

After months of lobbying by American officials, the Libyans consented ‘some time ago’ — weeks or perhaps even months — to the United States operations … [according to] more than half a dozen American diplomatic, military, law enforcement, intelligence and other administration officials….  The Libyans’ consent marks a significant step forward for the Obama administration, which has been criticized by Congressional Republicans for moving too slowly to apprehend the Benghazi suspects.

Not only was a liaison partner’s counter-terrorism cooperation exposed, the prime minister was kidnapped in retaliation for approving the raid!

Worse still, the Times revealed that a second raid had been planned, but not carried out, “to seize a militia leader suspected of carrying out the Sept. 11, 2012, attacks on the United States diplomatic mission in Benghazi.”

Or how about The Washington Post story revealing the existence of a secret US drone base in Saudi Arabia?  The Post reported:

President Obama’s plan to install his counterterrorism adviser as director of the CIA has opened the administration to new scrutiny over the targeted-killing policies it has fought to keep hidden from the public, as well as the existence of a previously secret drone base in Saudi Arabia…. The Obama administration’s targeted-killing program has relied on a growing constellation of drone bases operated by the CIA and the US military’s Joint Special Operations Command. The only strike intentionally targeting a US citizen, a 2011 attack that killed al-Qaeda operative Anwar al-Awlaki, was carried out in part by CIA drones flown from a secret base in Saudi Arabia.

Did this expose and endanger the cooperation of a critical US intelligence partner?

On June 13, 2012, the Washington Post reported: “The US military is expanding its secret intelligence operations across Africa, establishing a network of small air bases to spy on terrorist hideouts from the fringes of the Sahara to jungle terrain along the equator, according to documents and people involved in the project.” The article exposed that, “Under a classified surveillance program code-named Creek Sand, dozens of US personnel and contractors have come to [Burkina Faso] in recent years to establish a small air base on the military side of the international airport.” The Burkina Faso foreign minister, caught by surprise by the leak, is quoted as pleading, “This cooperation should be very, very discreet. We should not show to al-Qaeda that we are now working with the Americans.

These are just a few examples. The list of leaks and liaison partners exposed during the Obama years goes on and on.

None of this excuses Trump’s accidentally sharing top-secret intelligence with Russian officials. But it takes chutzpah for the media to express outrage over his apparently inadvertent disclosure of classified information – or to feign concern over the effect his actions might have on cooperation by our intelligence partners in the fight against terror – when they regularly published often intentional leaks from Obama administration that exposed sources and methods and endangered our national security.

Trump may have stumbled badly in his meeting with the Russians, but he has a long way to go before he does the kind of damage that President Obama and his team of intelligence sieves did – with the help of The New York Times and other news outlets now crowing over his error.