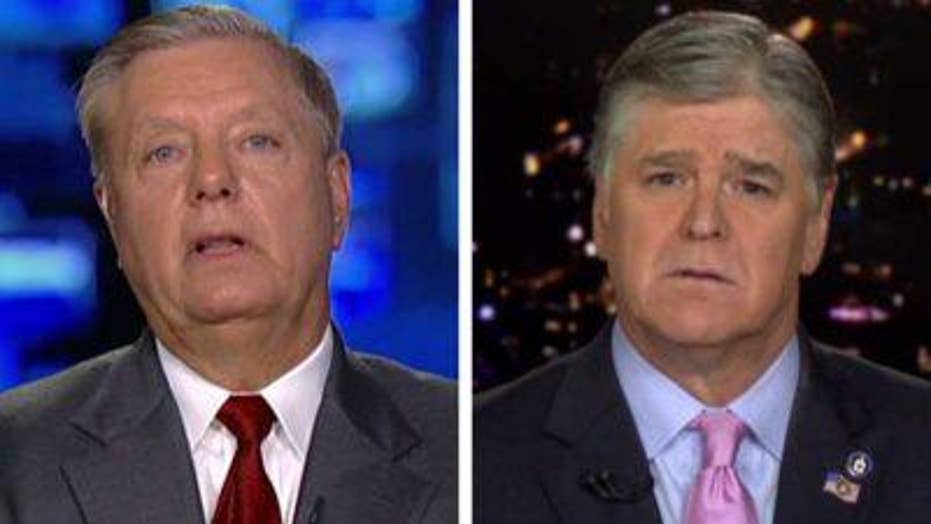 Lindsey Graham reacts to threats of impeachment against Justice Kavanaugh

A Columbia Journalism Review poll released this year found that half of all Americans have "hardly any confidence at all" in the media, which beat out even Congress as the institution for which the public has the lowest confidence.

It's not hard to see why. This month, CNN reported that the CIA was forced to pull a highly placed source inside the Kremlin because of concerns that President Trump might burn him -- when it turns out the decision to extract the source was made before Trump took office because of leaks from senior Obama administration officials.

Now, The New York Times has published an adapted excerpt from a new book by Times reporters Robin Pogrebin and Kate Kelly in which they breathlessly describe a "previously unreported story" about how Max Stier, a male college classmate of Supreme Court Justice Brett Kavanaugh, notified senators and the FBI that he saw Kavanaugh expose himself to a girl at a Yale party and that "friends pushed his penis into the hand of a female student."

One small problem: In the book, Pogrebin and Kelly write that the female student in question "refused to discuss the incident" and that "several of her friends said she does not recall it." That calls the entire allegation into question. Yet the Times did not include this vital information in the excerpt it published.

Pogrebin and Kelly conveniently blamed their editors for the omission. Why didn't they insist it be included when they reviewed the story before publication? And how then do they explain the fact that they also failed to mention it in an interview with NPR? When asked by Terry Gross the specific question, "Are there other women who have come forward?" they repeat their uncorroborated accusation without mentioning that this "other woman" not only did not come forward but also does not recall the incident.

The Times was later shamed into appending an editors' note to the story saying "the book reports that the female student declined to be interviewed and friends say that she does not recall the incident. That information has been added to the article."

Too little, too late. This is simply journalistic malpractice. Indeed, if prosecutors in a court of law were to do what the Times did – fail to disclose evidence that goes toward negating a defendant's guilt – they could have their case thrown out and face potential disbarment for prosecutorial misconduct. But apparently in the court of public opinion, anything goes.

That's not all. In their article, the reporters innocuously describe Stier as someone "who runs a nonprofit organization in Washington." They fail to share with readers in the story the fact that Stier was a member of Bill Clinton's legal team at the same time that Kavanaugh was working for independent counsel Kenneth Starr on the other side of the Monica Lewinsky investigation. That seems relevant information that could call his motives into question.

Amazingly, the Times story leaves out the one truly newsworthy revelation in the book. During the Kavanaugh hearings, Leland Keyser – whom Christine Blasey Ford named as a witness to her alleged assault – never testified, but her lawyer wrote the Senate Judiciary Committee that while she "has no recollection of the incident in question ... she believes Dr. Ford's account."

In their excellent book, "Justice on Trial," Mollie Hemingway and Carrie Severino first broke the news that Keyser told friends she did not in fact believe Ford. But Pogrebin and Kelly got Keyser to speak on the record for the first time.

"It would be impossible for me to be the only girl at a get-together with three guys, have her leave, and then not figure out how she's getting home" she told them, adding "I just really didn't have confidence in the story." She also said she was pressured by many who "wanted me to remember something different" and threatened "behind the scenes that certain things could be spread about me if I didn't comply."

For some reason, the Times did not find this news fit to print -- perhaps because it strengthens the case that Kavanaugh was smeared. The only thing more shameful than the Times's irresponsible reporting was news of all the Democratic presidential candidates who seized on the Times story to call for Kavanaugh's impeachment.

In light of Keyser's comments, they should be apologizing to Kavanaugh instead. And if the media want to understand why it has surpassed Congress as the least-trusted institution in the country, here is a textbook example.