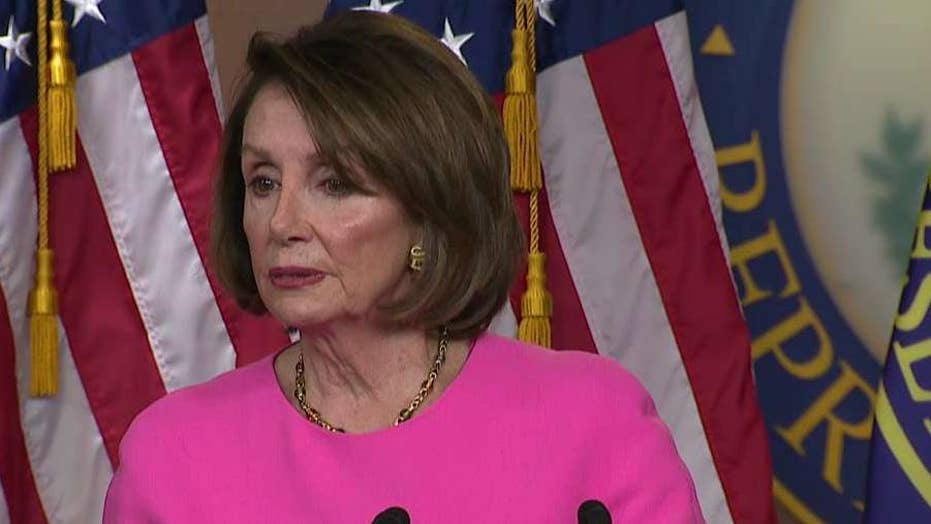 House Speaker Nancy Pelosi doubles down on her 'cover-up' claim, says she recognizes impeachment is a divisive issue for the nation and addresses whether Congress can work with the president.

The American people are sending a pretty clear message to Washington: They are sick and tired of the investigations into President Trump and don't want Democrats in Congress to impeach him. But the Democrats aren't listening.

A Harvard-Harris poll finds that 65 percent of Americans say Congress should not begin impeachment proceedings against Trump. Sixty percent agree with Attorney General William Barr that "the facts and public actions of President Trump did not amount to obstruction of justice, especially since there was no underlying collusion." And 58 percent believe that "Given the Mueller report ... we should turn the page on investigations of President Trump."

Yet, The Washington Post reports that "At least five members of Pelosi's leadership team — four of whom also sit on the House Judiciary Committee, with jurisdiction over impeachment — pressed Pelosi in a closed-door leadership meeting to allow the panel to start an [impeachment] inquiry." Rep. John Yarmuth, D-Ky., chairman of the House Budget Committee, declared, "I think there is a growing understanding that an impeachment process is going to be inevitable."

It's clear where the American people stand: They want Congress to stop investigating and start governing. If Democrats don't listen, they could hand Trump a second term.

If the Democrats go ahead with impeachment proceedings, they face a real danger that voters will see Democrats investigating at the expense of governing. In the Harvard-Harris poll, an overwhelming 80 percent of Americans say they want their "congressional representatives working more on infrastructure, health care, and immigration [than] investigations of President Trump." Right now, that's not what is happening. Five months into their newly attained majority, Democrats have accomplished almost nothing — little or no progress on health reform, drug prices, or public works projects.

Every day that Democrats choose to make news on impeachment and investigations is another day when voters see no action on a positive agenda for the American people. As the president made clear in his fiery news conference on Wednesday, House Speaker Nancy Pelosi, D-Calif., can't accuse him of engaging in a cover-up in the morning and expect him to negotiate with her on a $2 trillion infrastructure package in the afternoon. It is simply not going to happen.

However, there is one area where Americans do want an investigation: They want to know how in the world their government wasted two years and tens of millions of their tax dollars chasing a Trump-Russia conspiracy that turned out not to exist.

The Harvard-Harris poll also found that 55 percent of respondents say they think "bias against President Trump in the FBI played a role in launching investigations" against him, and 61 percent favor "appointing a special counsel to investigate potential abuses at the FBI."

Democrats may mock Trump for calling the probe a witch hunt, but most Americans think he is right. And when Senate Minority Leader Charles Schumer, D-N.Y., accuses the attorney general of "perpetuating conspiracy theories" they think: Wasn't "collusion with Russia" the conspiracy theory?

Democrats have no credibility when they accuse the president of obstruction, because Americans know that Democrats misled them. For the past two years, voters listened with alarm as Democratic members of the House and Senate Intelligence and Judiciary committees implied that they had seen secret evidence showing Trump had colluded with Russia. They were told that Trump was a Russian agent and a traitor who had committed crimes of "a size and scope probably beyond Watergate."

None of it was true. And now the very people who lied to them are accusing Trump of obstructing their "impartial" investigations? Sorry, Americans aren't buying it.

Democrats are effectively seeking to redo the Mueller investigation. This is ridiculous. Is a partisan House committee really going to uncover evidence of a Trump-Russia conspiracy that Special Counsel Robert Mueller and his team missed? Give me a break. And given the lack of an underlying crime, their claims of obstruction ring hollow for most Americans.

When Trump declares it's time to "get these phony investigations over with" the American people are with him. If Democrats keep pushing to impeach him, they risk driving many of these disgusted voters into Trump's waiting arms.

The president has given Democrats a choice — impeachment or bipartisan progress. It's clear where the American people stand: They want Congress to stop investigating and start governing. If Democrats don't listen, they could hand Trump a second term.