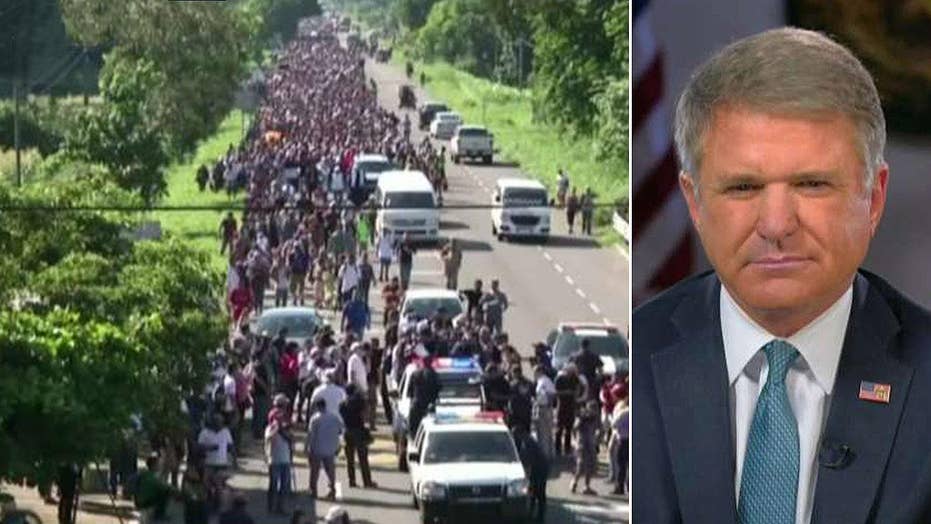 Rep. McCaul: We need to stop the caravan from entering U.S.

It is our nation’s history and tradition to welcome immigrants and refugees being persecuted from all over the world. It is right and moral. However, we must do it in an orderly manner set forth by law.

I often share the story that my family came to this country with the original Spanish settlers long before the Pilgrims landed on Plymouth Rock. The history of what makes up today’s southwest borderlands swirls with Native American, Spanish, Mexican, European, and eventually American migratory influences. Nations rose and borders were firmly established through diplomacy and sometimes conflict.

For those without a long view of history, the growing and imminent caravan of refugees heading north to America represents a welcome opportunity to thrust open our borders in an act of unbridled compassion and modern political correctness.

The opposing viewpoint sees an unexpected advancing and possibly threatening mob. This notion is given weight by the group's public declaration of its intention to come to the United States “no matter what.”

The issue of what to do with these marchers has hijacked the printed pages and airwaves of our news outlets, as well as the soapboxes of our politicians. As a nation of laws we should know what to do. We defend our borders and we process those who seek entry legally.

During the great immigration wave in the late 1800s and early 1900s, there was a coherent process that immigrants went through. When Lady Liberty raised her torch, it was a broad but not open invitation to the world. Proper documentation had to be presented at Ellis Island for an immigrant to be allowed to stay in the U.S.

Here’s the real irony of the situation: Without an FBI databank of fingerprints or Internet access, our ancestors kept better track of who was coming into our country than we do today.

Efforts to guard our border will be met, by some, with outrage at the thought of this compassionate and giving nation wanting to protect its sovereignty and citizens. Despite the cries of many on the left, it is not illegal to turn away from our border those who have not taken even one step along our legal immigration pathway.

Just showing up does not qualify anyone for asylum or special treatment. Tearing down our borders would be an assault on the security of our citizens and those who immigrate here through the legal process.

We accept immigration and diversity as completely as we believe in our sovereignty. The desire for economic prosperity and personal safety that drives many of the immigrants in this caravan is, in many respects, admirable and worthy of compassion. Their disregard for the laws of multiple neighboring countries is, however, unacceptable.

This is not simply theory or ideology – it is a matter of public safety and national security.

Our southwest border is where a great majority of our nation’s illegal drugs arrive, ready to be transported far and wide. A horrific culture of violence has evolved along our border with Mexico – violence that often bleeds into our country.

Just last year, 23 Mexican cartel operatives were arrested in New Mexico and West Texas after a 16-month-long investigation targeted members of the Sinaloa Cartel. The cartel had been led at one time by Joaquin “El Chapo” Guzman, the notorious drug lord who is currently awaiting trial in New York.

Properly vetting thousands of traveling immigrants who harbor the intention of storming our border – as they have done marching through other countries – is the correct course of action.

We must enforce our nation’s laws while demanding that our Congress modernize and reform the immigration system. Much of the current discord and uncertainty is a direct result of our federal legislators abdicating their responsibilities in favor of political warfare. Pitting identity subdivisions against one another for political purposes is morally wrong and reckless.

We accept immigration and diversity as completely as we believe in our sovereignty. The desire for economic prosperity and personal safety that drives many of the immigrants in this caravan is, in many respects, admirable and worthy of compassion. Their disregard for the laws of multiple neighboring countries is, however, unacceptable.

As our economy is taking off under the leadership of the Trump administration, now more than ever, we need a growing and well-prepared immigrant population that will guarantee America’s cultural and economic future.

The U.S. faces similar demographic challenges as Europe and Asia: Who will pay for the Social Security benefits that retiring baby boomers will need, and the growing costs of Medicare, our aging infrastructure, and our national defense?

The majority of those who wish to come are good, earnest people, and their contribution to the U.S. economy will be essential.

This isn’t rocket science. If we provide a legal and orderly path, immigrants and refugees will come. They will be welcomed. No caravan needed.