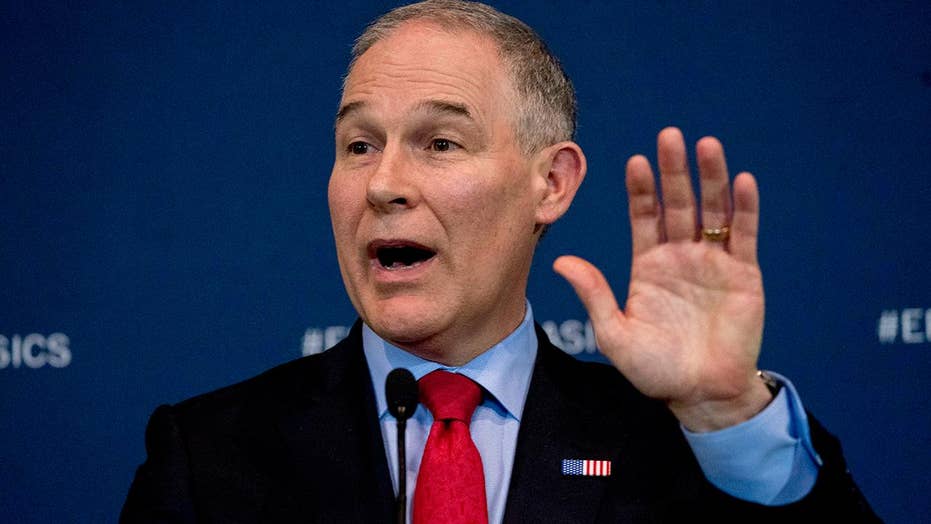 The far left will stop at nothing in their efforts to derail the presidency of Donald Trump. Still bitter about the outcome of 2016, the left claims much of their outrage toward the president is driven by his unpredictable personality, but ideological opposition to his administration’s reform-minded agenda is the real root of their anger.

Nowhere is this more evident than the furor surrounding Scott Pruitt, the administrator of the Environmental Protection Agency (EPA).  Trump’s opponents have seized on a number of recent unflattering news stories involving Pruitt and his agency. While admittedly not the best public relations for Pruitt, his “real sin is that he is one of Mr. Trump’s most aggressive reformers,” as the Wall Street Journal editorialized last week. President Trump expressed a similar sentiment over the weekend when he tweeted praise for his EPA chief’s “bold actions” and “record clean Air & Water while saving USA Billions of Dollars.”

Since taking office last year, Pruitt has boldly carried out the president’s campaign promises. In October, he moved to repeal Obama’s Clean Power Plan regulations, ending the War On Coal and providing a shot in the arm for coal country that had been decimated.

Pruitt and Trump issued an executive order doing away with the Obama-era Waters Of The United States (WOTUS) that sought to impose new regulations on every miniscule body of water in this country.  And Pruitt encouraged Trump to withdraw from the Paris Agreement, an accord which the UN itself admitted last year was largely symbolic, but whose damage to American businesses would have been real.

Environmental protection remains a priority: under Pruitt’s leadership, $100 million dollars have been awarded to Flint, Michigan, to upgrade the drinking water and to clean up sites contaminated with hazardous substances and pollutants – known as “Superfunds” – has been prioritized.

Pruitt’s “scandals” are exaggerated for political expediency: never mind that the Obama EPA spent just as much, if not more, than Pruitt’s team, according to a recent Fox News report.  Or that Lisa Jackson, Obama’s EPA chief, was caught using the email alias “Richard Windsor” to communicate with people outside the government. Or that one Obama-era EPA employee was caught downloading and watching pornography on the job. These issues prompted no outrage from Hill offices, and one questions if Congressional inquiry could possibly be politically motivated, or if left-wing outrage is a one-way street.

These millions of Americans who lost their jobs, their towns, and their livelihood voted to undo the EPA’s destruction, and Scott Pruitt is doing just that.

The left also knows that opposing Trump and Pruitt will curry favor with Tom Steyer, the San Francisco billionaire taking a bigger and bigger role in the public policy debate. Already having pledged $30 million dollars of his vast fortune to help elect identically ideological environmentalists, Steyer has now embarked on a publicity stunt to impeach the president, spending millions on television and digital ads.

Lost amid all the noise is the extreme damage the previous EPA did to rural communities. My work takes me to small, energy-rich towns around the country.  These are the places where America gets its power, where multiple generations of energy workers live and worship and raise their families.  Places where the champions of the eco-left would not deign to visit.  These towns survived dot.com bubbles and housing crashes because the majority had steady, good paying jobs in coal mines or oil fields.

These proud towns went from prosperity to poverty during eight years of EPA regulatory action as unemployment became rampant, and with it, myriad hardships: shuttered stores on main street, depleted education funds, increased opioid use.  Families broke apart as moms and dads moved from their beloved hometowns looking for work.  The very fabric of their communities – neighbors, schools, churches, little league, diners, town squares – destroyed in less than a decade.

The ideologues of the previous EPA believed they were punishing “the fat cats” as Obama liked to call rich people who didn’t vote for him, or “millionaires and billionaires” in Bernie Sanders lexicon, or “big oil” according to the eco-left. But who they really punished were the forgotten men and women in Ohio, Pennsylvania, West Virginia, Kentucky, New Mexico, Alaska, and Louisiana, among others.  These millions of Americans who lost their jobs, their towns, and their livelihood voted to undo the EPA’s destruction, and Scott Pruitt is doing just that.  His punishment will be severe: the eco-left, in conjunction with their elected patrons in Congress and media allies, will persecute him relentlessly.

Our message to Administrator Pruitt: American energy workers who are going back to work thank you. The American economy thanks you. And please remember these wise words: if you want a friend in Washington, get a dog.