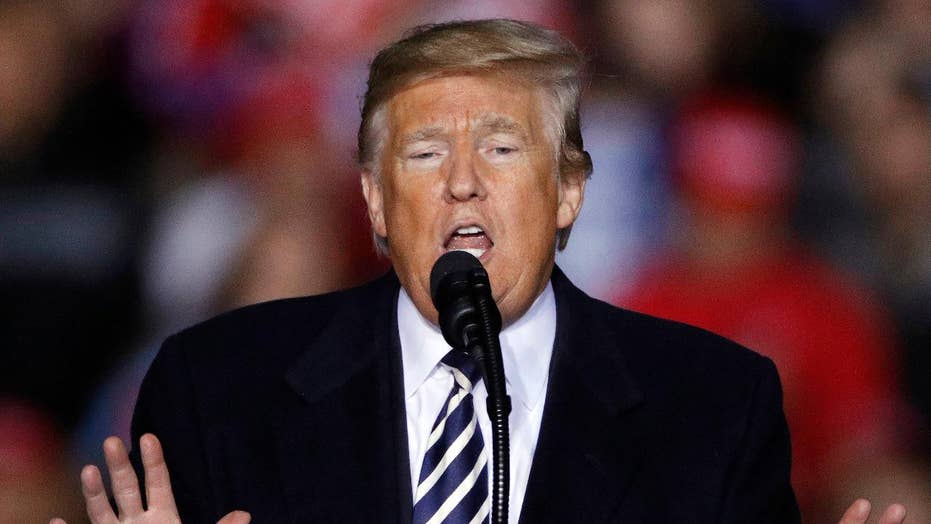 President rallying voters across the country in the last weekend before the midterm elections; Kevin Corke reports from the White House on the schedule.

The midterm elections are on Tuesday, and no one truthfully has a clue how they will turn out. The consensus is that Democrats will take the House and the GOP will keep the majority in the Senate, but with so many races within the margin of error, predictions are being dished out with lavish sides of caution.

CBS News reported on Sunday’s “Face the Nation” that their race-by-race survey had Democrats taking the House by a super-slim 15 seat lead, 225 to 210, but with a 13-seat margin of error. Voter energy is huge; one forecasting group is predicting the highest turnout since 1966.

Win or lose, it wasn’t meant to be this way. Post-election, in 2016, Democrats were positive that Donald Trump would be squashed by a mutiny led by the left and bolstered by all right-minded Americans who would reject the president’s confrontational approach on immigration, education, the Paris Accord, the Iran nuclear deal, burdensome regulations, political correctness and what he calls the Fake News media. They expected a Blue Wave to roll over the country in the midterm elections, buoyed by voters who finally realized what a dumb mistake they’d made on November 8, 2016.

LIZ PEEK: DEMOCRAT-LED HOUSE WITH PELOSI, WATERS AND SCHIFF IN CHARGE WOULD ONLY DEEPEN THE PARTISAN DIVIDE

So certain was this prediction that an astonishing 39 Republicans in the Senate and the House announced they would not run for reelection; eliminating those resigning to run for a different position, there are still three GOP senators and 23 members of the House who have retired, “the fifth-biggest exodus of any party in any election going back to 1974,” according to FiveThirtyEight.

Though the reasons for those retirements vary, certainly several were scared they would lose, driven out of office by anti-Trump fervor.

Though visions of a Blue Wave still dance in Nancy Pelosi’s head, President Trump is upending expectations by attracting huge crowds as he stumps for candidates across the country and moving the needle in scores of close races. Candidates who might once have eschewed his support have scrambled aboard the Trump Train, eager to align with a president winning almost unprecedented support within his own party.

Democrats still fail to understand Trump’s appeal and are therefore ill-equipped to dent it.

How could this happen? First, Democrats still fail to understand Trump’s appeal and are therefore ill-equipped to dent it. In a recent New York Times op-ed, Frank Bruni quoted former Obama adviser David Axelrod cautioning that Democrats cannot make “the careless presumption that everyone who voted for Trump is a toothless, ignorant racist…if they’re shunned and belittled for having supported him in the first place, they will just be further driven into his column.”

That is exactly what has happened. As the liberal media relentlessly hammers President Trump (and, by association, people who voted for him) for being a racist because he opposes illegal immigration, or being a climate ignoramus because he ditches the lop-sided Paris Accord, or being anti-female because he sticks with Brett Kavanaugh, his supporters only become more convinced that they made the right choice.

Axelrod is no dummy. In Bruni’s piece, he is also quoted as saying that “voters disgusted by the paralysis on Capitol Hill “viewed Trump as the kick in the ass that Washington needed.” He is right. Trump’s approval ratings may not be high (though a week ago they were indeed as high as Obama’s going into the 2010 midterms) but they top those of Congress, last logged by Gallup at 21 percent.

President Trump will not fix all our problems, but he has a better shot than most, because he approaches the country’s and the world’s problems with an untutored eye. He does not have rafts of experts telling him what to think: he has common sense.

President Trump will not fix all our problems, but he has a better shot than most, because he approaches the country’s and the world’s problems with an untutored eye. He does not have rafts of experts telling him what to think: he has common sense.

Common sense suggests that our NATO allies should shoulder their fair share of the developed world’s defense burden. It argues that we should withhold foreign aid from countries that openly despise us and align with our enemies.

Common sense also dictates that we welcome people who enter the country legally and close our borders to those who do not. It indicates that if our public education system is failing generations of low-income minority children who need it most, we should give alternative solutions a chance. It means, too, that providing health care insurance that is so expensive that it cannot be used is as bad as providing no insurance at all.

President Trump’s willingness to breach norms is sometimes painful – as in his ongoing and petty battles with critics large and small – but it is mostly refreshing. Conventional approaches to our country’s challenges have often failed; many Americans are willing to try a new approach.

President Trump has rewarded voters by producing a gangbusters economy. Democrats cannot deny that the GOP tax cuts coupled with a pro-business White House have lifted confidence, hiring and wages. Americans of all races and ages are better off than they were, and most credit President Trump with their improved outlook.

Trump’s enduring popularity with a good segment of the country has driven his political rivals to utter insanity, demonstrating over and over their unsuitability for leadership. Their dirty tricks campaign against Brett Kavanaugh was one of the ugliest political spectacles in our lifetimes, while their increasingly virulent “resistance” tactics are souring many independent and undecided voters.

Democrats cannot refute the logic and wisdom of many of Trump’s policies; they have no policy agenda that can match what the White House is offering. They can only march and shout. Whether that approach will generate a Blue Wave, once thought a certainty, we will soon know.