Which 2020 Democrats could get the cold shoulder in Iowa?

Independent Women's Voice fellow Lisa Boothe on how the candidates can separate themselves from the pack.

You have to hand it to Iowa Democrats. Faced with a bewildering bevy of candidates vying for their attention, voters are promoting those who may credibly challenge President Trump in the 2020 race while winnowing out the buffoons and publicity-seekers who are merely along for the ride.

According to the latest survey, for instance, “Spartacus” Sen. Cory Booker, D-N.J., is struggling at 1 percent and Sen. Kirsten Gillibrand, D-N.Y., has all but disappeared despite viral videos showing her sledding, playing beer pong and bowling. Turns out featuring “Kirsten being Kirsten” as her campaign has touted, isn’t quite as powerful as Kirsten tackling voter concerns.

Recent polling by CNN and the Des Moines Register shows Joe Biden’s popularity slipping from unsustainable heights, now down to 24 percent of the vote. Meanwhile, Sen. Bernie Sanders', I-Vt., lead over Sen. Elizabeth Warren, D-Mass., and South Bend Mayor Pete Buttigieg has all but evaporated; those three candidates are now in what is described as a dead heat, several points behind Biden. Sen. Kamala Harris, D-Calif., trails but is not invisible, with 7 percent of the vote. 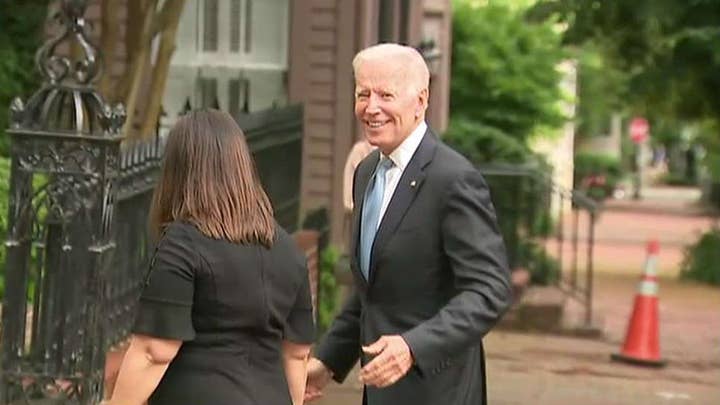 To their credit, Iowa voters have shown zero interest in New York Mayor Bill DeBlasio and have demoted former U.S. Rep. Beto O’Rourke. Congratulations are in order on both fronts.

With the Iowa caucuses still eight months away, these positions may certainly shift. The debates on June 26 and 27 could provide some laggard an opportunity to break through and grab the national spotlight.

And, in the months to come, the continuing roll-out of policies could produce some surprises. But with the candidates crisscrossing Iowa indefatigably, making their case to groups large and small, the early soundings should not be ignored.

It is no surprise to see Joe Biden’s enormous lead narrow. After extensive dithering, the former vice president entered the race with huge name recognition and the star power attendant to serving for eight years as President Obama’s loyal lieutenant. In the intervening weeks, however, Biden has all but disappeared. For a gaffe-prone candidate, it was not an idiotic approach.

However, he is facing off against a hyperactive group eager to distinguish themselves. Compared to Sanders or Warren, 76-year-old Biden does indeed look like “Sleepy Joe," as Donald Trump has called him. Biden has missed a number of forums, including the California Democratic Convention (the only top-tier no-show) and more recently the Iowa Democratic Party Hall of Fame dinner. The latter gathering is considered a must-attend for those campaigning in the Hawkeye State; Biden’s team explained he was attending his granddaughter’s graduation. That excuse did not go down well and allowed his competitors to throw some shade on Uncle Joe.

Buttigieg told the Cedar Rapids audience that Democrats won't win by "playing it safe," implicitly knocking Biden’s “moderate” stance, while  Warren reminded attendees that she was not “spending [her] time with high dollar donors and with corporate lobbyists. I'm spending my time with you.”

Unlike Warren, who has sworn off big-ticket donor events, Biden is hitting the money trail hard. He is planning a fund-raising blitz in San Francisco later this month, with events hosted by former Obama bundlers. Also on his calendar: a Manhattan event June 17 hosted by Wall Street short-seller Jim Chanos with guests paying up to $2,600.

Sanders, also took a swipe at Biden saying, “I understand that there are some well-intentioned Democrats and candidates who believe that the best way forward is a 'middle ground' strategy that antagonizes no one, that stands up to nobody and that changes nothing."

Arriving late to the party, Biden has scrambled to assemble a platform that will appeal to progressive caucus-goers but also reassure those blue-collar voters who defected to Trump in 2016. So far, he has weighed in on education, adopting Democrats’ traditional pro-union anti-charter school position, and on climate change. His climate platform, which elicited charges of plagiarism, broke no new ground. He looks like a blast from the past because he is.

Even his recent about-face to now opposing the Hyde Amendment, which prohibits taxpayer dollars being used to fund abortions, looks like Biden playing catch-up.

In contrast, when it comes to policies, Warren is like the late Jimmy Durante with jokes; she “has a million of them.” She rolls out a policy nearly every week; she wants to enact a wealth tax, overturn how our corporations operate, break up big tech, solve the opioid crisis, enact a “green manufacturing plan” and so much more. Campaign t-shirts proclaim “I have a plan for that," because she does.

Warren’s dogged attention to the nation’s problems is working for her; she has steadily climbed in the polls as voters applaud her energy and commitment. She has, for now, recovered from her dishonest pretentions to Native American ancestry.

Sanders is still the favorite of liberal voters who credit him with moving the party hard left and who they think was shamefully treated by party authorities in 2016. But he has lost ground to others, like Warren, who have picked up his progressive banner and are waving it more vigorously.

Buttigieg, the small-town Millennial mayor who has broken into the top ranks, represents generational change. He is not a lightweight like O’Rourke but rather a former Navy intelligence officer, a Harvard grad and Rhodes Scholar who speaks several languages and who is gay. He is the outside the box candidate, perfect for “woke” progressive voters and a darling of the liberal media. Already he has been photographed, with his husband, for the cover of Time Magazine.

It is eight months until the Iowa primary, way too soon to view the recent polls as determinative. But we are getting an early view of which candidates are getting through to voters.

Surveys show that, above all, Democrats want to nominate the person best able to beat President Trump. Given the radical agenda Democrats are endorsing on abortion, taxes, climate change and immigration, that will be a much tougher challenge than winning in Iowa.