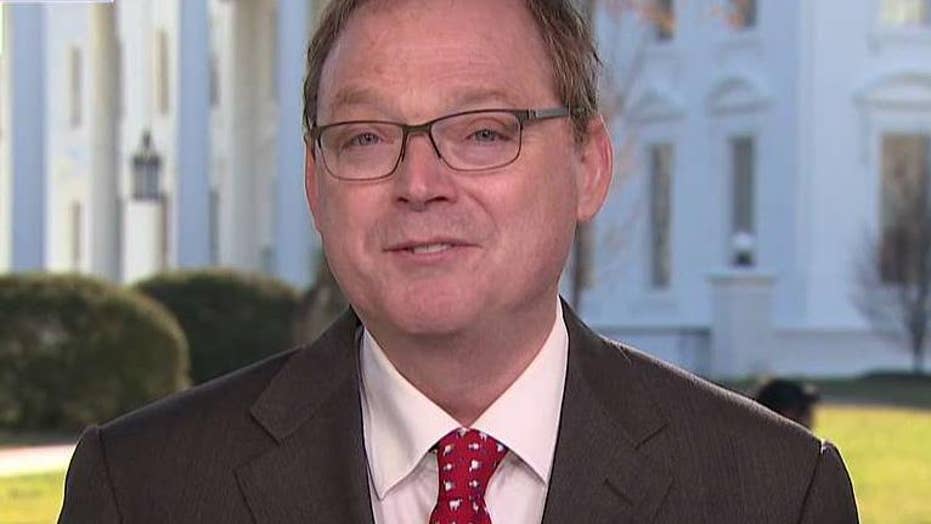 Chairman of The Council of Economic Advisers Kevin Hassett tells 'America's Newsroom' that the administration is setting a high bar for economic growth to tackle the deficit.

Since 1965, federal taxpayers have poured an estimated $2 trillion into education programs associated with President Lyndon Johnson’s War on Poverty.

But despite this staggering expenditure – which represents just a fraction of combined federal, state and local K-12 spending – education attainment gaps between upper-income students and their less-affluent peers remain as wide as ever.

For example, new research shows that toward the beginning of the War on Poverty, 14-year-old students from the poorest families were three to four years behind those from more affluent families. But unfortunately, researchers concluded that current efforts rooted in federal programs and spending have not reduced this socioeconomic gap in education achievement.

The study was conducted by Paul Peterson of Harvard University, Ludger Woessmann of the University of Munich, and Eric Hanushek and Laura Talpey of Stanford University.

After $2 trillion and nothing to show for it, one starts to question the wisdom of throwing good money after bad.

Enter the federal budget proposed by President Trump in March. It would cut the Department of Education’s budget by $7.1 billion – a 10% reduction from 2019 spending.

Federal education spending merely reinforces a failed status quo, concentrates decision-making in Washington (away from the students affected by those decisions), strains taxpayer resources, and fails to move the needle on improving educational outcomes.

Teacher development is rightly a state and local responsibility, not a federal one. Moreover, evidence suggests that there is little return on investment from the teacher professional development programs funded by the feds.

As for the 21st Century Community Learning Centers Program, there is no evidence that this program – started a quarter of a century ago – has improved learning among its participants. In fact, a scientifically rigorous evaluation of the program found just two statistically significant academic impacts – and both were negative. The program has had no impact on improving students’ math, English, or science achievement.

Eliminating these programs is the only responsible thing to do. Squandering billions more in taxpayer dollars to prop them up is just irresponsible.

Federal education spending merely reinforces a failed status quo, concentrates decision-making in Washington (away from the students affected by those decisions), strains taxpayer resources, and fails to move the needle on improving educational outcomes.

President Trump’s budget proposal for the 2020 fiscal year would end the costly Public Service Loan Forgiveness program. This George W. Bush-era program allows college graduates employed in a public service job – either in government or the nonprofit sector – to have the balance of their student loans forgiven after just 10 years of payments.

Loan forgiveness is generally a bad policy, as it transfers the cost of one’s education from the student to American taxpayers.

Additionally, this policy encourages students to prioritize “public service” work over other sectors of our economy that may be in higher demand and where they might find to be a better professional fit.

The federal government should not promulgate policies that lead to the expansion of government employment paid for by American taxpayers.

The president’s budget also proposes eliminating the in-school interest subsidy on student loans, which delays any interest accruing on a student’s loan until after graduation. According to the Congressional Budget Office, eliminating this subsidy would save taxpayers $23.4 billion over the next decade.

The elimination of both loan forgiveness and subsidized federal loans will insulate taxpayers from liability and help restore the private student loan market. This, in turn, will put downward pressure on tuition prices.

The White House budget highlights an issue few policymakers have been willing to address: the indisputable fact that federal spending and programs for K-12 education and higher education have failed.

Cutting spending at the Education Department is the correct response.  It means families would keep more of their hard-earned money, and have fewer decisions made by Washington bureaucrats when it comes to something as important as the education of their children.

More than a half-century after the failed War on Poverty, it’s a good time to start.

Lindsey M. Burke is the Will Skillman Fellow in education policy at the Heritage Foundation.