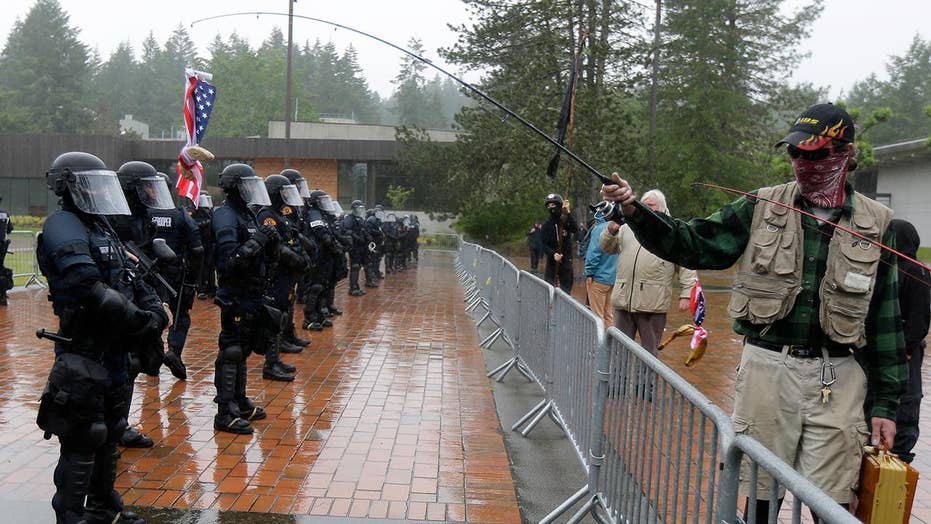 Activist liberal groups, that make up the alternative left, or the 'alt-left' are examples of the political extremism and the number of violent clashes growing across the country

The mainstream media failed to see the rise of Donald Trump in 2016. Now it’s overlooking another grassroots movement that may soon be of equal significance— the growing number of liberals “taking the red pill.”  People of all ages and ethnicities are posting YouTube videos describing “red pill moments”—personal awakenings that have caused them to reject leftist narratives imbibed since childhood from friends, teachers, and the news and entertainment media.

You might say that those who take the red pill have been “triggered.” But instead of seeking out “safe spaces,” they’re doing the opposite, posting monologues throwing off the shackles of political correctness.

Their videos can feature the kind of subversiveness that was once a hallmark of the left—before the movement lost its sense of humor.

A sample: “I Don't Care About Charlottesville, the KKK, or White Supremacy.” The commentary calls out liberal fearmongering over white supremacists. “I mean there are, what, 6,000 Klansmen left in our nation. You want me to actually process that as a legitimate fear every day when I wake up?”

Not insignificantly, her video got nearly 500,000 views and overwhelmingly enthusiastic comments. (“you rock, girl!” “this woman is awesome.”)

A later episode about Black Lives Matter got nearly 700,000 views and had the distinction of being briefly taken down by YouTube. Unapologetic, Owens responded with a follow-up commentary — “What YouTube and Facebook REALLY Think of Black People.”

She declared, “There was only one version of a black person that these platforms are willing to help propel towards fame and notoriety—and that is an angry black victim.”  Owens calls her channel “Red Pill Black.” It invites viewers: “Sick of the alt-left. Welcome, I prescribe red pills.”

The term “taking the red pill” derives from the movie "The Matrix," the trippy sci-fi classic. Morpheus, the resistance leader played by Laurence Fishburne offers Neo, the movie’s hero played by Keanu Reeves, a choice: He can take the blue pill and remain in the repressive artificial world known as the Matrix where “you wake up in your bed and believe whatever you want to believe.” Or he can take the red pill and tumble down the “rabbit hole” where he will come to realize that everything about his life was a lie.

The left’s intensifying war on free speech has produced a surge of red pill videos. Some take Owens’ in-your-face approach. Others are meandering, hipster confessionals delivered with the wordy earnestness of characters in a Duplass brothers movie.

In his YouTube Channel, Dissent Report, a young, one-time “Bernie Sanders supporting progressive Democrat” admits from behind large sunglasses that he’s made “a pretty hard turn to the right.”

He took the red pill after seeing friends “moving …towards an authoritarian sort of Progressivism.”  He explains, “They were just standing up for a divisive brand of politics that would tolerate no dissent whatsoever.”

Not surprisingly, the mainstream media has largely dismissed the red pill phenomenon. Coverage has mainly stressed the connection to men’s rights activists —the Red Pill forum on Reddit and the documentary, “The Red Pill,” are both about men’s rights. This narrow focus, however, misses the larger story.

Those who have been “red pilled” may start out questioning feminism. But that’s often just the beginning.

A red pill blogger who calls himself “Pat Riarchy” (“also known as the patriarchy”) recalls that his journey down the rabbit hole began when a Facebook friend derisively called him a “cis male.” He came to recognize that, “it's been one narrative pretty much.”  He concluded, “I have my own objective view…I didn't want a bigger government. I realized I didn't like the universal healthcare plan…I realized I didn't really have an issue with guns.” Several books and discussions later, he emerged as a libertarian.

Red pill bloggers are increasingly characterizing PC culture as a first step on a slippery slope towards authoritarian socialism.

One who articulates this best is Dave Rubin, a married gay man and former left liberal whose show, The Rubin Report, has explored the red pill phenomenon.

In his commentary, “The left is no longer liberal”, he explained his own disillusionment with the “regressive left,” whose “backward ideology” of identity politics “puts the collective ahead of the individual. It loves all of its minority groups to behave as a monolith.

"So if you're a true individual—meaning you don't subscribe to the ideas that the groupthink has attributed to you based on those immutable characteristics—you must be cast out.”  Rubin calls this mindset “the biggest threat to freedom and Western civilization that exists today.”

One of his recent guests was Cassie Jaye, producer of the The Red Pill” documentary, which chronicled her personal journey away from feminism.

Jaye had intended to make a feminist film about the men’s rights movement. But her perspective began to change upon interviewing activists, who were anything but the angry women-bashers so often portrayed by the mainstream media. Instead they were men—and also women—concerned about issues such as unfair child custody laws, pregnancy fraud, and even domestic violence.  It turned out that men are also victims of domestic abuse perpetrated by women with surprising frequency.

Jaye’s film met with immediate resistance from radical feminists, who trolled her online while she was fundraising for the film. Her documentary has been largely ignored by most of the mainstream media. But it has had widespread impact on the Internet.

Laci Green, one of YouTube’s best known personalities whose left-leaning videos about sex and gender have an immense following, posted “Taking The Red Pill?”

Green’s relatively tame confession of discomfort with feminists who shut down opposing views, as well as the revelation that she was dating an anti-SJW YouTuber, enraged her fans. They waged an online campaign against her and reportedly “doxxed” her — published her personal information on the internet.

Many who proclaim themselves “red pilled” express a yearning for traditional values. “Pat Riarchy” wants to see a return to an era where comedians can “attack everyone,” not just Trump. “PC culture is going down,” he says. “A lot of people want this to stop.” Kirsten Lauryn, a 20-something hipster sitting amidst empty church pews, worries that,  “A lot of our society has drawn away from religion as an important way of instilling values.” She observes, “The pendulum is swinging back to a more traditional lifestyle. I see this with my generation Generation Z.”

The media has very likely ignored red pilling for the same reason it underestimated support for Donald Trump: An entrenched establishment always resists disrupters, especially those who reject its worldview.

That said, red pill bloggers are not necessarily Trump supporters—in many cases, quite the reverse. What they do share, however, is their questioning of mainstream media tropes.

Not all their videos would pass muster with Reagan conservatives or even libertarians. But, taken together, they give hope to those worried about the future of capitalism and free speech in America.

Elizabeth Ames is writer and co-producer of the public television documentary, "In Money We Trust?" and co-author with Steve Forbes of "MONEY: How the Destruction of the Dollar Threatens The Global Economy and What We Can Do About It "(McGraw Hill).