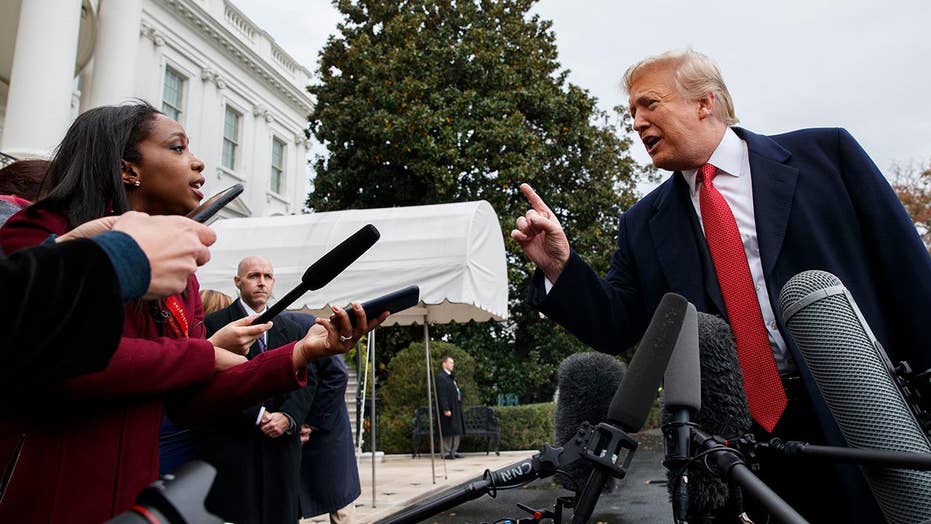 Many journalists argue that there is no such thing as liberal media bias. But polls show that most Americans disagree. Even a recent survey of financial journalists shows self-described liberals outnumbering conservatives 13-to-1.

The result is a national press that attacks those on the right for anything and downplays everything awful done by the left.

That was especially true this week as the media slammed supporters of President Trump as being “racist” just for voting for him, accused AR-15 owners of being mass murderers, and deployed synonyms from the dictator handbook to describe President Trump – from “authoritarian” to “Stalinist.”

The sports site Deadspin actually used a documentary about the Ultimate Fighting Championship to describe the president as “a racist, misogynist, litigious grifter buffoon.”

Then, on the other side of the coin, the media showed their liberal loyalties. They called former first lady Michelle Obama a “superstar.” They celebrated how democratic socialist Rep.-elect Alexandria “Ocasio-Cortez's shoes are making history” (“It's Gotta Be The Shoes,” an ad once said). And journalists did their collective best to bury every uncomfortable story about the left from liberal anti-Semitism to a congressman tweeting about nuking … Americans.

Let’s start on the right – and where better than CNN and CNN political analyst Kirsten Powers? During a Don Lemon panel on why white women aren’t woke enough to all vote for Democrats, Powers let fly with her attack.

Powers criticized people who say, “‘Well, I’m not racist, I just voted for him (Trump) because I didn’t like Hillary Clinton,’” adding: “I just want to say that’s not – that doesn’t make you not racist. It actually makes you racist.”

Not to be outdone, Newsweek national politics writer Nina Burleigh chimed in to bash gun owners. She retweeted a stupid comment by Democrat Rep. Eric Swalwell of California‏, noting: “Almost every single person I’ve ever heard of with an AR-15 has been a mass murderer.” Burleigh was widely criticized and refused to accept any of it, saying she assumed, “the majority are pro @NRA Russian bots.”

The media didn’t just target President Trump. Anyone on the right was fair game. The New York Times went after the president’s family, asking, “Are Jared and Ivanka Good for the Jews?” This from the same newspaper that also complained that criticism of liberal billionaire George Soros is somehow anti-Semitic.

The media didn’t have similar concerns about anti-Catholic comments. NBC attacked traditional Catholics and outlets like LifeSiteNews for agreeing with the church’s stance on gay marriage. It even called them “alt-right” in an attempt to marginalize their beliefs. Those beliefs are, incidentally, the official stance of the church – but not the position of many liberal Catholics in the news media.

Buzzfeed even went after American icon Smokey Bear, falsely accusing him of backing the idea of “suppressing fires in forests.” The outlet deleted the tweet, apparently after someone remembered that Smokey’s entire career was built on preventing forest fires. But being seen as an American icon makes you are target in today’s news.

2. Press Unmoved by Liberal Controversies: The sound liberal scandals usually make in the media was described decades ago by musicians Paul Simon and Art Garfunkel – it’s the sound of silence.

It doesn’t matter what bad thing happens on the left, the press will try to cover it up more than cover it. Look at the ongoing media focus on anti-Semitism, a horrific global problem. The press claims to care, until you dig a little deeper. You discover, there was almost no national coverage of liberal ties to anti-Semite Louis Farrakhan, despite him repeatedly being caught up in controversy.

Farrakhan, who heads the Nation of Islam, despicably compared Jewish people to insects in one recent rant. “I’m not an anti-Semite. I’m anti-termite,” declared the left-wind bigot. Presidential daughter Chelsea Clinton rightly called his comments “dangerous.” But there has been almost no coverage of Farrakhan on the broadcast networks for a year.

But don’t stop there. “Morning Joe” brought MSNBC host Al Sharpton on to blast Trump for anti-Semitism. There’s only one problem with that. Back when Scarborough was an actual Republican and serving in Congress, he proposed a resolution: “Condemning the racist and anti-Semitic views of the Reverend Al Sharpton.”

The major media would have been all over it if a conservative had so openly backtracked. But it got almost no attention because Scarborough works for MSNBC. The press is OK with how much he has to contort himself to fit in the network’s world view. They are also OK that MSNBC employs Sharpton as a host.

Media cover-ups directly benefit politicians with the letter “D” after their name. Anti-gun Rep. Eric Swalwell, D-Calif., has proposed a mandatory government buyback of “assault weapons,” got into trouble recently because of the crazy comment he made on Twitter.

Responding to a comment saying the congressman “wants a war” over guns, Swalwell reminded the poster that “it would be a short war my friend. The government has nukes.”

Ordinarily, a congressman would make news with even a sarcastic comment about nuking his fellow Americans. Not Swalwell, who has already indicated he might run for president in 2020. The story got extensive coverage in conservative media and the congressman ended up defending himself on Twitter repeatedly.

Swalwell tried to represent it as a joke, but the real joke was the media coverage of the controversy. A prospective presidential candidate jokes about nuking people who oppose his mandatory gun seizure (itself a highly controversial plan) and the major media ignore it. All we got was a Newsweek article and a Snopes propaganda piece about the whole issue.

Rather than skewer the senator for incompetence or lying, Fact Checker Glenn Kessler admitted that “Gillibrand managed to mangle three statistics in three consecutive sentences before a large audience.” Then he gave her a Pinocchio-free pass.

No wonder. The press has gotten good at giving the left a pass.