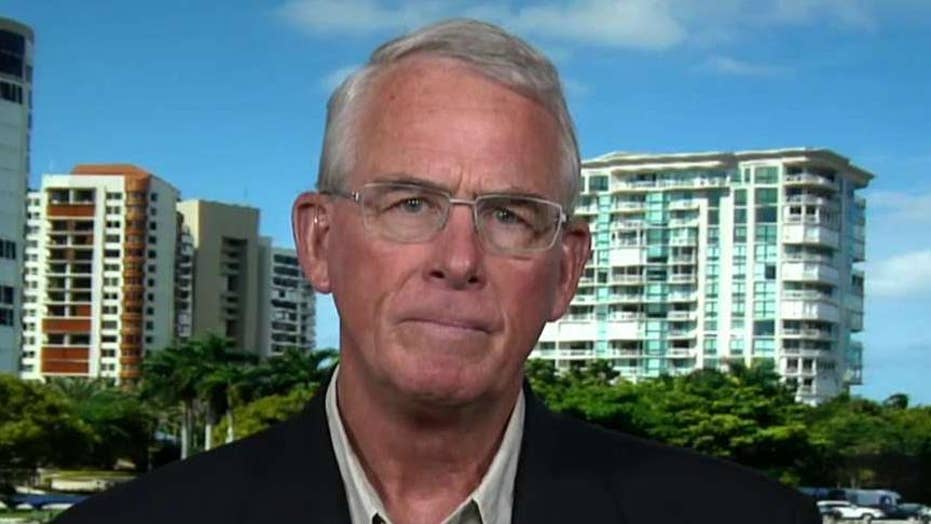 President Trump announces he will cut off aid to El Salvador, Guatemala and Honduras

Florida Republican Rep. Francis Rooney says most of the aid given to El Salvador, Guatemala and Honduras goes to non-governmental organizations, not the governments of those countries.

In one of his most famous parables, Jesus told the story of a Samaritan who stopped to help a traveler who nearly died in a violent attack by thugs. The Samaritan provided lifesaving emergency aid to someone of a different religion, nationality and ethnicity and paid for his long-term rehabilitation. Jesus contrasted the Samaritan with other travelers who were too busy or too afraid to help, and praised him as the one who had answered God’s call to be a neighbor to those in need.

We face a humanitarian crisis along our southern border that is directly linked to a continuing crisis in El Salvador, Guatemala and Honduras -- the countries known as the Northern Triangle. But a recent White House proposal to cut off aid to our struggling neighbors is not the solution and threatens to increase suffering and insecurity.

We represent dozens of faith-based organizations and American faith communities who are entrusted with implementing U.S. foreign assistance in Central America.

The two of us were in Honduras in January where we saw communities powerfully impacted by these efforts. Our faith-based work strengthens families, protects youth, creates opportunity, and leverages private funding for greater impact.

We are investing in transforming some of the roughest and toughest neighborhoods where violence is daily, half of inhabitants live below the extreme poverty line, and malnutrition threatens an entire generation of children.

Foreign assistance is a long-term investment in the region and its people. Our help has never been more effective or rigorously monitored. And in the case of the Northern Triangle, the vast majority of U.S. foreign assistance funding is managed by non-profits and civil society groups, including faith-based organizations like World Vision, Catholic Relief Services, Food for the Hungry, and many more.

We understand that it can be hard to recognize the progress that is being made when so many people are still fleeing violence, hunger, and poverty.  But cutting aid now would be counterproductive, exacerbating the root causes of migration. Instead we should be increasing our nation’s engagement, diplomacy, and aid programs.

The call for a sudden end to aid is both drastic and dangerous -- and will forfeit the good work being accomplished on the ground.

We fear that the consequences will be felt across many borders, including our own, as further lack of opportunity and violence drive more Central Americans north.

Studies have found a striking link between violence and the number of children seeking refuge at our border. From 2011 to 2016, for every 10 murders in Honduras, El Salvador, and Guatemala, six children sought safety in the U.S. No parent should have to face the horrific choice between sending their child on a dangerous journey north or risking violence or death from gangs at home.

Following the last migration wave in 2014, America mobilized the entire region to step up investments in youth and police reform. Through dozens of youth centers and safe spaces, vocational training, and family-based programs, we have created hope for young people.

We saw homicide rates drop by 42% in El Salvador, 13% in Guatemala, and 23% in Honduras, with even higher declines of up to 78% in some of the toughest neighborhoods of Honduras where the U.S. Agency for International Development (USAID) and our faith groups target their programs. These programs are making a real difference. Eliminating this funding will only stunt the progress we have seen.

As we walk alongside our southern neighbors, it is because of the small investment from USAID that we are able to multiply these resources -- making an even greater impact.

In the United States, the 29 faith-based organizations that implement U.S. foreign assistance raise almost $5 in private funds for every public $1 received.

This leverage is also true of our Central American neighbors. Because of the U.S. investment over the last several years, the governments of Honduras, Guatemala, and El Salvador have increased their investment in their own people -- at a level 10 times that of the U.S. commitment.

Working in partnership, Central American governments have strengthened their own hand against gangs and violence by training law enforcement, improving justice systems, and promoting human rights and good governance.

During the height of U.S. aid programs from 2015 to 2017, America saw some of the lowest numbers of migrants at our southwest border in decades. But it’s clear from the current crisis that we must do more. This starts with reversing the proposed elimination of foreign assistance. We must nurture the progress we have achieved while working for an even greater harvest.

Together, we should step up our commitment and accountability with our neighbors to the south. There is no question that Central American governments need to take responsibility for their own people, but U.S. foreign assistance is critical to helping these countries realize this goal. Both Republicans and Democrats in Congress agree that cutting aid will harm U.S. interests and be counterproductive to our shared goals with Central America.

As partners with the administration and Congress, we stand ready to engage and help chart a new path in Central America -- one that invests in health, safety, and security for families in a region that is troubled but has so much potential.

Edgar Sandoval Sr. is the president of World Vision U.S.

Leith Anderson is the President of the National Association of Evangelicals.