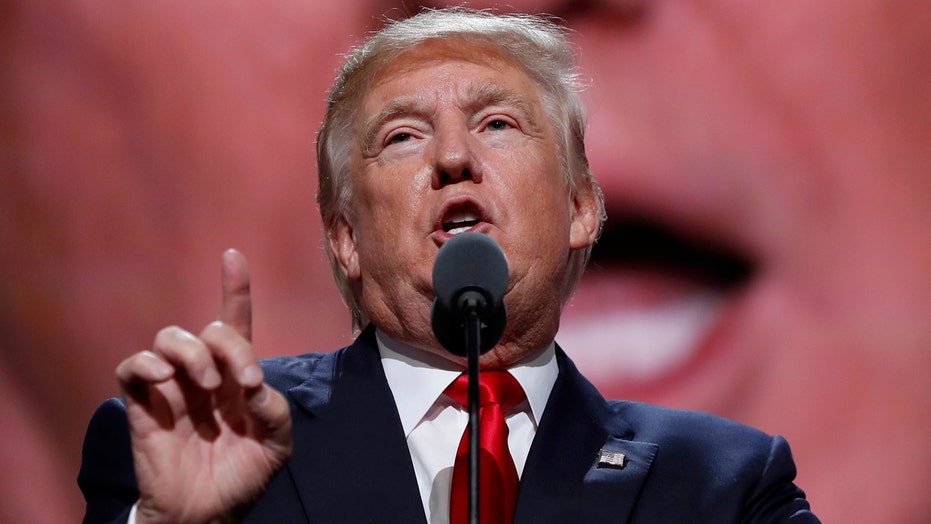 Trump closed the final night of the RNC with a speech

“I honestly have never heard a speech that is… as full of fear — the most negative convention speech I have ever heard,” griped former Clinton Treasury Secretary Robert Reich.

“You can’t cover the country in a blanket of fear,” complained columnist Mike Barnicle on MSNBC.

I haven’t seen the left this upset with a GOP speech since Ronald Reagan — which is great news for Republicans. They’re back to screaming about “tone” and “negativity,” which is a good sign for Republicans.

If the Democrats try to pretend that it’s “Morning in America” — that everything is OK, and we should stick to the status quo — then they could be running into a buzzsaw.

If the Democrats try to pretend that it’s “Morning in America” — that everything is OK, and we should stick to the status quo — then they could be running into a buzzsaw. On the other hand, how can they claim that they are for change when they are stuck with Hillary as the nominee?

Trump on Thursday night did paint a bleak picture of America under President Obama — and how much worse it could soon be under Hillary Clinton.

“Our Convention occurs at a moment of crisis for our nation. The attacks on our police, and the terrorism in our cities, threaten our very way of life,” he said. And: “Nearly 4-in-10 African-American children are living in poverty, while 58 percent of African-American youth are now not employed. Two million more Latinos are in poverty today than when President Obama took his oath of office less than eight years ago. Another 14 million people have left the workforce entirely.”

Sure, those statements may be depressing, but they are also facts. Pure and simple.

Not everyone in the media thought Trump was ineffective or too dark, though. Some were actually surprisingly honest.

Consider this from a writer at uber-liberal Salon, which seemed to have a sudden epiphany about the power of Trump’s message: “From the ashen, haunted faces around me in the press gallery, and the conversations over hastily guzzled drinks before and after, I feel sure I wasn’t the only person here who felt as if he were suffering from PTSD, sunstroke and a stomach virus, all at the same time. Still, it was an educational bout with the existential flu. Anybody who still thought Donald Trump was a joke and a dumbass who would humiliate himself and his party go down to Mondale-scale defeat now knows better. You can pick Trump’s speech apart and examine its flaws, of course, but from the point of view of performance and dynamics only one verdict is possible. He killed it. He. Killed. It.”

One other point: the fact that so many commentators felt that Trump’s speech was too dark is simply a sign of how out-of-touch folks inside the Beltway really are.

For more than 10 years, Americans have been saying that the country is on the wrong track.  And the press just ignored them.  Now the press is finally starting to hear what Americans are really going through, and they are trying to pretend that things aren’t that bad.

We need a new elite that is prepared to deal with America as it is, instead of wishing our problems away.  And in November, we may just get it.

The Democrats are going to put forward the same people, with the same ideas, that they have been pushing since 1992.  The world has changed, and they are living in the past.

Nostalgia can be fun, but it’s a luxury most Americans these days cannot afford.  We need a new administration that will focus on the world as it is today, not engage in the fantasy of thinking that somehow we can return to the 1990’s.

Democratic voters know this. They blocked Hillary in 2008. They tried to block her in 2016.  But the Donor Class in that party is just too strong. The Donors convinced Obama to go with the same old economic agenda that Bill Clinton had used, and it didn't work. This year, the Donors simply crushed all dissent, forcing Hillary on a party that doesn't want her.

Unless she is defeated this fall, the Democratic Party will continue to calcify, trapped in a museum of old ideas that haven't been fresh since the Internet was invented.

Laura Ingraham is the host of FOX News Channel’s (FNC) The Ingraham Angle (weeknights 10PM/ET). She joined the network in 2007 as a contributor.
ADVERTISEMENT