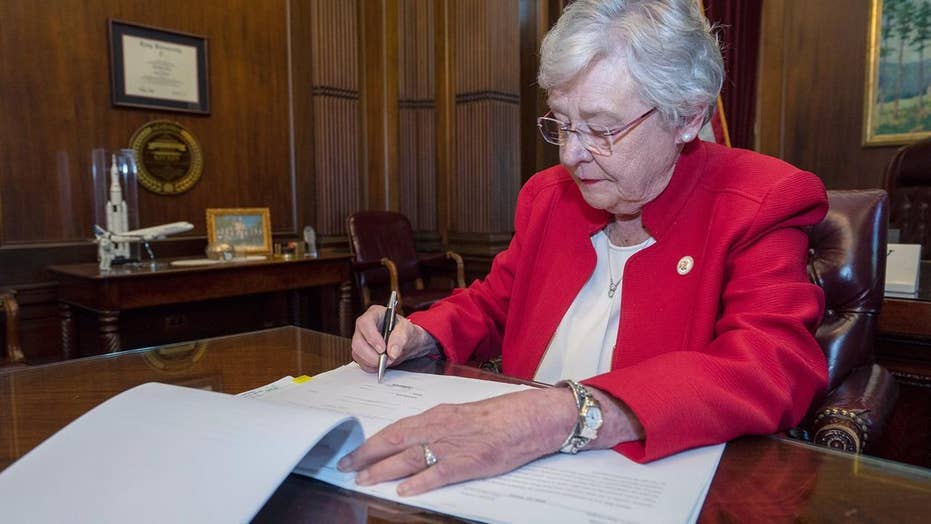 Celebrities lash out on social media in the wake of Alabama’s Republican Governor Kay Ivey signing a law that bans most abortions in the state.

Following the 2016 presidential election, liberal elites wasted no time in demonizing those people populating “Red States.” Writing for The Hill, Duane Townsend was among the first to voice an opinion that has become familiar to the point of cliché: “America is held hostage by flyover states.” Townsend offered this thoughtful, measured analysis of this demographic:

“A flyover state is the huge region between the coasts. As opposed to the eastern seaboard, northern post-industrial states and Pacific Ocean states. They’re overwhelmingly Republican, stanchly conservative, regressive right wing, evangelical Christian and working class, well, the loudest, most ill-informed of them are….They either want their country back or they’re tired of being ignored. They regularly blurt the latter as justification for electing right-wing theocrat/closed minds, austerity minded, cultural fascists to office.”

This sort of rhetoric has become commonplace in the interim years, and, just when you thought it was impossible for it to get any worse, it did.

The reason for the uptick in vitriol and bigotry toward this “huge region between the coasts” — can we safely assume Townsend rejects the “fruited plain” thesis? — is the recent wave of abortion laws successively passed by Ohio, Kentucky, Mississippi, Georgia, and, most restrictive of all, Alabama. This led the Boston Globe to announce that “America’s red state legislatures are on an abortion bender.”

Over the weekend, "Saturday Night Live’s" Leslie Jones, in a rant more befitting a girl fight YouTube video than a television show known for clever political satire, attacked the “weird-ass men” who passed these laws. Uncouth and unfunny, she made a crude remark about their supposed lack of testicular fortitude and, in what was meant to be her mic-drop moment, she concluded with this profoundly insightful observation: “women are the same as humans!”

Not wanting to be left out of any political controversy these days, Jim Carrey tweeted that he wished that Alabama Governor Kay Ivey had been aborted. A drawing accompanied his tweet depicting (presumably) forceps being plunged into the side of the governor’s head and blood spurting forth from the wound.

More articulate but no less venomous, Pulitzer Prize-winning author Diane McWhorter offered a sweeping condemnation of the state of Alabama for CNN (an easy sell, I am sure). Behind this new Alabama law restricting abortions to all but cases where the mother’s life is in danger, she sees the specter of bigotry, backwardness and “the oligarchic dark ages.”

Implicit in each of these attacks is the left’s abject hatred for their pro-life opponents and the demographic and states they represent—“flyover country.”

She then goes on to merrily smear Alabama senators on the basis of where they are from — “To read the names and places of those 25 white men is to enter some alt-right Disneyland of American history.” She goes after one because of who his grandfather was. This would be akin to labeling Nancy Pelosi a white supremacist because she hails from Baltimore, a city with a checkered past of racial tension and violence, or dismissing Obama because of his associations with the racist Jeremiah Wright.

These opinions reflect the mainstream of pro-choice advocacy. They are not the fringe. But for space, I would cite more. Note the (unintentional) hypocrisy:

Leslie Jones slammed the Alabama and Georgia abortion bans on "Saturday Night Live." The comedian compared the landscape to "A Handmaid's Tale." (YouTube)

Jim Carrey, in his disgusting and graphic portrayal of the murder of Governor Ivey, unwittingly acknowledges in vivid colors what happens in the womb every time an abortion is performed.

And Diane McWhorter, who so casually maligns people because of their origins and ancestry, is, by her own admission, the child of a man with, at the very least, KKK sympathies.

I remind you that these are people who posture as holding the moral high ground. Do they give even a moment’s thought to what abortion really is? Other than Carrey, who clearly has and doesn’t care, the answer seems to be no.

So what, then, is driving this passion to keep abortion legal? Is it really a deep concern for women, as they claim? Health care?  Safety?

Implicit in each of these attacks is the left’s abject hatred for their pro-life opponents and the demographic and states they represent—“flyover country.”  And let’s be clear: it is hatred, delivered with a breathtaking venom. It is not civil disagreement that is prepared to give way to the lawful political process.

For the left, the fierce take-to-the-streets kind of opposition to restrictions on abortion is not ultimately about a woman’s right to choose or safety or anything else related to pregnancy or medical care. Not really. The real reason is much less altruistic and much more emotional.

It is about taking the sanctity of life — the centerpiece of an American conservatism which has at its core Christianity — and rubbing it in the faces of people they hate.

Why? As smug, self-righteous elitists, they really think they are just better.