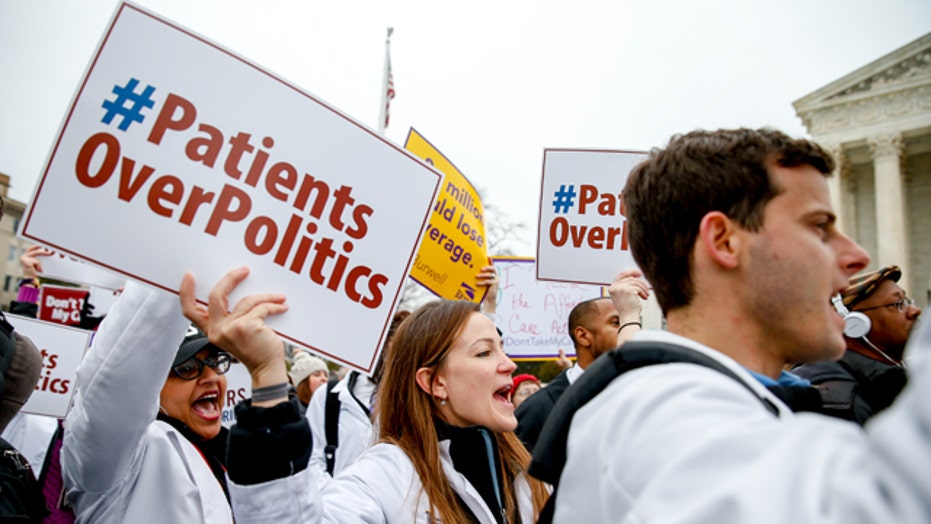 On Wednesday the Supreme Court will hear King v. Burwell, the long-awaited challenge to the Affordable Care Act. And sometime in June the justices almost certainly will issue their decision on the case, either upholding ObamaCare as it currently stands or ruling that a specific part of the law is unconstitutional.

The fact that the Supreme Court is debating the meaning of four words shows how badly ObamaCare was written. It explains why we’re all still trying to figure out who — the states? the federal government? — is responsible for what.

It’s essentially a choice between putting the patient on life support and pulling the plug entirely, because no matter which way the justices go, this much is certain: We’re in a lose-lose situation. As things stand now, providing affordable health care to all Americans is a problem that just will not go away.

The fact that the Supreme Court is debating the meaning of four words shows how badly ObamaCare was written. It explains why we’re all still trying to figure out who — the states? the federal government? — is responsible for what.

Heads, you lose: If the Court upholds ObamaCare in its current state, it will be unable to maintain financial solvency.

Tails, you lose: If the Court strikes down the law, millions of Americans who get health insurance through HealthCare.gov will suddenly find themselves uninsured, and we could conceivably go back to the days of rejecting applicants due to pre-existing conditions and knocking kids off their parents’ plans as soon as they turn 18 or graduate from college.

What makes things even more dire, if the justices rule that ObamaCare is unconstitutional, is that the Republicans who control both houses of Congress and have voted dozens of times to repeal the law have given no indication, other than a slew of tag-lines and buzzwords, that they can propose a better alternative.

This has all come about because of some questionable wording in the ACA. The law calls for a federal subsidy system to help middle- and lower-income Americans purchase health insurance if they do not get it from their employer and don’t qualify for Medicare or Medicaid, and it specifies that the subsidies will be available on exchanges established by the state.

But what no one seems to have anticipated was that only 16 states would set up their own exchanges. Thirty-four states refused, at which point the federal government set up exchanges for their citizens through HealthCare.gov. But since those exchanges were not established by the state, the plaintiffs in King v Burwell claim the states have no obligation to accept the federal subsidies.

So where does everything stand now?

The Court will have to decide whether established by the state was just a poorly constructed combination of words that did not represent the intent of Congress, or whether our lawmakers meant what they said and said what they meant.

One thing we’ve learned is that Congress needs a course in remedial reading. It is both astonishing and unforgivable that our 535 representatives in the House and Senate can be so cavalier as to write a bill with such ambiguous language — and be unable to recognize and correct it before it is signed into law. The fact that the Supreme Court is debating the meaning of four words shows how badly ObamaCare was written. It explains why we’re all still trying to figure out who — the states? the federal government? — is responsible for what.

Because of this carelessness, many of our health insurance exchanges, both state and federal, are currently not working as they’re supposed to. Nobody really knows what the financial burden is, and it’s even more confusing to consumers, who have no idea how much they really should be paying for health insurance and whether the government will be able to collect the penalties they’re required to pay if they don’t.

Finally, no insurance policy can work without an understanding of risk. Plain and simple, the subsidies the government provides to people who need assistance to pay for their health insurance will not cover the cost of the infrastructure the exchanges need to provide for the consumers.

So the Supreme Court has two ways — or possibly three — it can go with King v Burwell:
• It can decide that the subsidies are legal and uphold the law as it currently stands. Then we can all sit back and watch ObamaCare hurtle toward insolvency.
• It can overturn the law, leaving millions without insurance and possibly returning Americans to where they were before: with their kids getting knocked off their policies well before their 26th birthdays and with no coverage for pre-existing conditions — and with a dysfunctional Congress seemingly unable to do anything about anything, let alone something this complicated.
• And then there’s a third option: The justices could rule that the plaintiffs in King v Burwell don’t have standing to bring the case, thus rejecting it outright and kicking the ball down the road, waiting for it to be picked up and played another day.

Heads, we lose. Tails, we lose. Land on the edge, we lose. But however the Court goes, here’s the bottom line:

Subsidies are not a free lunch. The true cost of ObamaCare and its source of funding needs to be accounted for, or we’ll be kicking the can down the road forever, just as we are with Medicare, Social Security and countless other entitlements.