When an Iranian minister is astonished at a disclosure by a former secretary of state about a close U.S. ally, you know something is seriously wrong – and, if the allegations are confirmed, this U.S. official should never hold a government position again.

It is being widely reported that in 2018 John Kerry, then the former secretary of state, told Iranian Foreign Minister Javad Zarif about over 200 covert Israeli attacks on Iranian interests in Syria. This allegation comes from a leaked tape recording of comments Zarif made to an Iranian journalist last month obtained by the New York Times and Iran International. Fox News has not independently confirmed this recording.

If this report is true, it means Kerry was not just revealing sensitive classified information to an American enemy, he was giving this enemy sensitive covert action intelligence about one of America’s closest allies. And even worse, Kerry may have done this in private meetings with Zarif to undermine President Trump’s Iran policy.

Sen. Dan Sullivan, R-Alaska, got it exactly right when he said yesterday "If this is true … he [Kerry] should resign or he should get fired by the president of the United States. Enough is enough."

Kerry denied the allegations in a tweet yesterday, saying they "are unequivocally false. This never happened - either when I was Secretary of State or since."

It’s not surprising Kerry denied that he passed classified information to Iran because he knows he has only two choices: disprove this highly damaging story or resign. But disproving the story will be difficult because it is hard to believe Zarif would lie about this claim to an Iranian journalist.

Regardless of whether the allegations prove true, they will exacerbate the damage the Biden administration currently is doing to the crucial U.S.-Israel relationship.

Israeli officials must be irate over the alleged comments because they would put the lives of Israeli soldiers and agents at risk by giving Iran insight into the type and scope of Israeli covert operations in Syria. How may Israeli lives would such a leak by Kerry put in danger?

President Biden’s desperate efforts to rejoin the deeply flawed 2015 nuclear deal with Iran have already hurt U.S.-Israel relations. This was apparent when Israeli agents reportedly conducted a massive sabotage attack on April 11 against Iran’s Natanz uranium centrifuge plant without giving prior notice to the United States and while U.S. Secretary of Defense Lloyd Austin was flying to the Mideast to meet with Israel officials.

This was a huge Israeli snub to the U.S. and a clear signal that Israeli officials do not trust the Biden administration.

Reports of the Kerry disclosure to Iran will make Israel even less willing to cooperate with the United States on the threat from Iran or to share crucial intelligence. Needless to say, this will hurt the security of both countries. 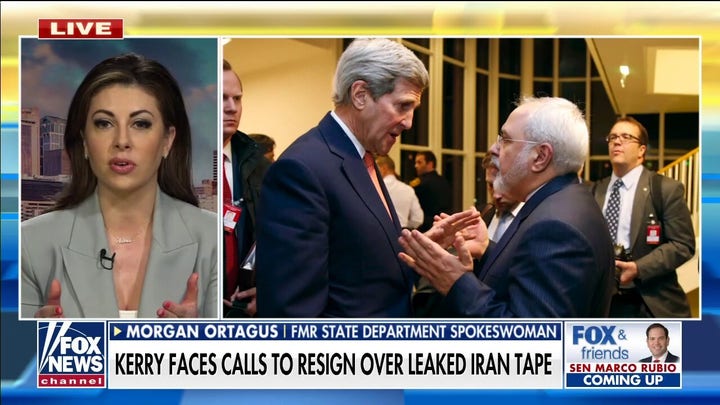 So where would Kerry have gotten classified information? If this happened in 2018, as some believe, Kerry could have known about Israel’s super-secret covert operations because he retained his security clearances after he left office and obtained classified briefings from the CIA and other intelligence agencies during the Trump administration.

If this was the case, it validates President Trump’s decision to lift the security clearance of former CIA Director John Brennan and Trump’s attempt to lift security clearances of other Obama officials, such as former national security adviser Susan Rice and former FBI Director James Comey, who he believed could not be trusted with access to classified information.

If the allegations prove true, the responsible way Biden should deal with the compromise of intelligence and the damage to the U.S.-Israel relationship is to fire John Kerry. But unfortunately, Biden is neither responsible nor competent, and his administration is engaged in their predictable attempts to play down and dismiss the Kerry leak story.

Republican congressmen, at every opportunity and especially in the 2022 elections, should make an issue of reports that Kerry gave classified Israeli intelligence to Iran. Moreover, if a Republican wins back the White House in 2024, he or she must be prepared to cancel the security clearances of most if not all Biden officials so they cannot do what Kerry is accused of doing – leaking classified information to a U.S. enemy as part of an effort to undermine the foreign policy of a Republican president.