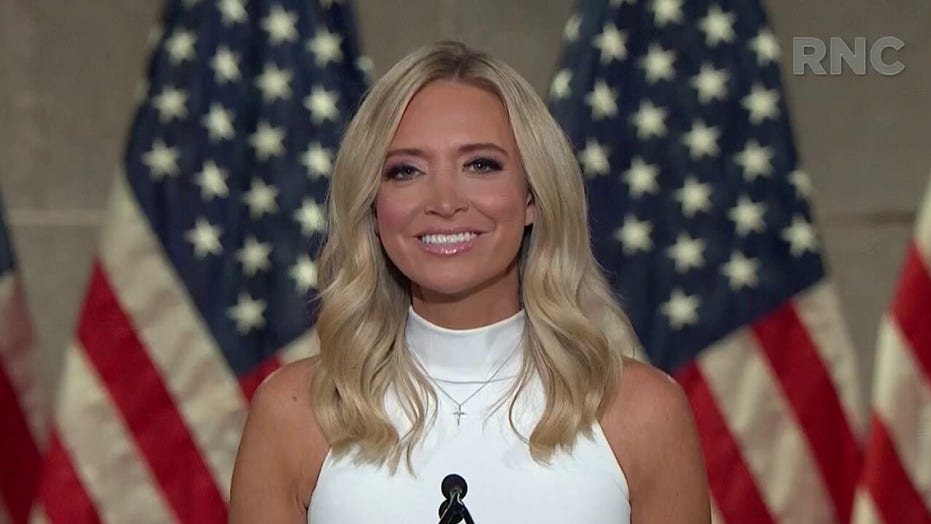 Kayleigh McEnany: I want my daughter to grow up in President Trump's America

Editor’s Note: White House Press Secretary Kayleigh McEnany spoke to the Republican National Convention Wednesday night about undergoing a double mastectomy at age 30. Fox News published this op-ed by her on May 1, 2019 discussing the experience one year after her surgery.

On the morning of May 1, 2018, I woke up knowing that the day I had anticipated for nine years had finally arrived. It was the day of my preventative double mastectomy – the day I would attack my BRCA 2 genetic mutation head-on and take my chances of breast cancer from 84 percent to virtually zero.

Still dark outside, I scurried into the shower and began to cover myself with Hibiclens, the antiseptic, pre-surgery cleanser my doctors had given me. Knowing this would be the last time I would be my unaltered self and the last time I would have nerve sensitivity in my chest region, I tried to take in the feeling of the warm water and appreciate what I had, until this moment, taken for granted – the feeling of a simple shower.

I put on soft grey sweatpants and a pink zip-up hoodie, both items that my mom had meticulously shopped for in the lead-up to this day. After packing my overnight bag for the hospital, I made sure to put on my grey socks dotted with bright yellow lemons, purchased specifically for this moment.

A few days before surgery, my mom, my sister, and I had gone shopping for new bras. In the course of debating what my new bra size would be and which bras were most appropriate for post-mastectomy life, my sister held up a pair of socks with yellow lemons. I immediately had to have them.

Those socks, while meaningless to some, for me evoked the memory of a very applicable scene from the TV show “This Is Us.”  In the show, the sage, old doctor offers these words of wisdom to a young father who had just lost one of his newborn triplet children: “I like to think that one day you’ll be an old man like me talking a young man’s ear off explaining to him how you took the sourest lemon that life has to offer and turned it into something resembling lemonade.”

The author at a Tampa Bay LIghtning hockey game four days after her preventative double mastectomy at age 30 on May 1, 2018.

That, in a nutshell, precisely summed up what May 1, 2018 – the day of my preventative double mastectomy – was all about: “taking the sourest lemon that life has to offer and turning it into something resembling lemonade.”

My faith in Jesus Christ was my strength that day, and those socks were a reminder of how He can turn life’s trials into good.

On the way to Moffitt Cancer Center in Tampa, Florida, that morning, I listened to the lyrics that had given me strength up until this point:

There’s a mountain here before me,

and I’m going to climb it with strength not my own.

He’s gonna lead me or the mountain beats me.

The night before my mastectomy, I had done my best to keep my mind off of the impending procedure. My family and I went to the Tampa Bay Lightning hockey game, where I binged on pizza and ice cream and took full advantage of the doctor’s advice to eat up the night before since I had to begin fasting at midnight.

After midnight passed, I spent about an hour journaling my thoughts, my anxieties, my worries, and my hopes until I said a prayer and fell asleep.

Despite my anxiety that evening, I was oddly at peace in the pre-surgery room as the doctor drew on me with a permanent marker, outlining where he would be making incisions.

My post-mastectomy life is not one embattled but emboldened.  I live free of fear and full of hope.

Throughout my BRCA 2 journey, I had tried to remind myself of the silver lining.  When I would worry while lying face down in the MRI machine, I would assuage that worry by thanking God that I had access to modern medicine.  And this day – the day of my surgery – I reminded myself of how blessed I was to have a supportive family.

I had siblings constantly calling me with words of encouragement; a husband who promised to love me no matter what; a dad who had been my rock on that journey to finding my perfect husband; and a mom who had walked the same path before me when she too had a preventative mastectomy nine years earlier.

Their support and that of my Savior “carried me through."

Just before my doctors wheeled me back into the operating room, my dad said a prayer. For the first time in my life, I heard my dad’s voice shake as he began to cry. Hearing his emotion brought tears to my eyes. We said our goodbyes just moments before I drifted off to sleep.

Six hours later, I woke up in good spirits. I tilted my head forward, anxious to peer beneath the pink compression bra and see how I looked. Much to my amazement, I looked virtually unchanged. “Did they even do the surgery?!” I asked in bewilderment.

Several years prior to my mastectomy, I had gotten implants at the recommendation of my doctor. Implants, he explained, form a pocket over time. Ordinarily, implants cannot be placed immediately following a mastectomy because of the strain they put on already sensitive skin, but the pockets that my implants had formed over time permitted my doctors to keep my implants in place following my mastectomy.

The advantages of this approach were two-fold: I would not wake up entirely flat, and I would be able to avoid the painful expander process that stretches your skin before reconstructive surgery.

The approach I had taken left me feeling strong, confident, and nearly unchanged.  I felt no pain during my night in the hospital, and the only discomfort I felt throughout my recovery was the strain from surgical drains that hung from small inserts on my sides and collected excess blood.

After four days of lying on the couch, I made my first outing to a Tampa Bay Lightning game.  The oversized hockey jersey was perfectly suited for covering my pesky, protruding drains.

Sitting at that hockey game, I was completely relieved.  The worry of breast cancer was behind me.  Perhaps that’s why it seemed perfectly appropriate to take a post-surgery picture displaying my drains at a celebratory hockey playoff game.

I had gone from creeping worry to peaceful tranquility.

One year down the road, I could not be happier with my decision to have a preventative double mastectomy. In January, I had my final reconstructive surgery. My saline implants were exchanged for silicone ones with appropriate contouring that left me looking almost identical to my pre-mastectomy self.

My post-mastectomy life is not one embattled but emboldened.  I live free of fear and full of hope.

In my post-mastectomy life, I could stand before more than a thousand women at Turning Point USA’s Young Women conference in June and say with complete confidence: “I will never die of breast cancer.”

Indeed, “those are the moments when you take the sourest lemons and make them into the sweetest lemonade.”