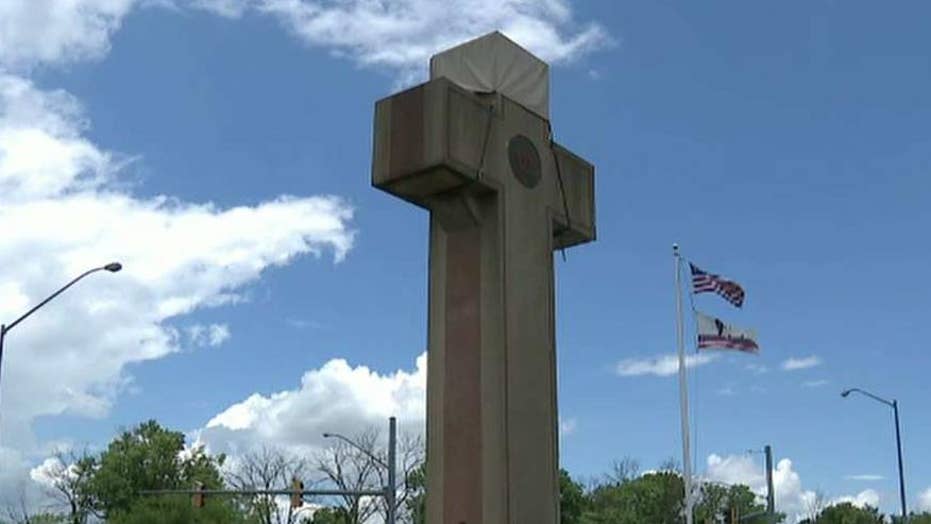 Hiram Sasser and Kevin Bartlett say that the Supreme Court ruling will allow many veteran memorials to stay standing.

For several decades, the far left in the United States has been working feverishly to eliminate all semblance of faith from the public arena, and its chief vehicle for imposing its anti-religious zealotry has been the nation’s court system.

However, recent decisions by the Supreme Court – made by justices appointed by Presidents Ronald Reagan, George H.W. Bush, George W. Bush, and Donald Trump – have shifted the tides against liberals seeking to restrict religious freedom and expression, ensuring all Americans’ religious liberties are protected.

The most recent example of the high court’s commitment to religious freedom was handed down in a decision issued last week. In that case, American Legion et al. v. American Humanist Association, the court ruled in a 7-2 decision a “Peace Cross” war memorial on public land in Prince George’s County, Maryland does not violate the Constitution’s First Amendment, which reads, in part, “Congress shall make no law respecting an establishment of religion.”

“For nearly a century, the Bladensburg Cross has expressed the community’s grief at the loss of the young men who perished, its thanks for their sacrifice, and its dedication to the ideals for which they fought,” wrote Justice Samuel Alito in the court’s majority opinion.

“The image of the simple wooden cross that originally marked the graves of American soldiers killed in World War I became a symbol of their sacrifice, and the design of the Bladensburg Cross must be understood in light of that background,” Alito added. “That the cross originated as a Christian symbol and retains that meaning in many contexts does not change the fact that the symbol took on an added secular meaning when used in World War I memorials. The Cross has also acquired historical importance with the passage of time, reminding the townspeople of the deeds and sacrifices of their predecessors as it stands among memorials to veterans of later wars. It has thus become part of the community.”

The Supreme Court is now firmly committed to protecting many kinds of public religious expression, including symbols and monuments like the “Peace Cross” – even when government is involved.

The court’s decision comes on the heels of several other important cases involving religious liberty, including Trinity Lutheran Church of Columbia, Inc. v. Comer (2017), in which the court ruled that a private Christian school could not be blocked from participating in a state government-funded program “solely because it is a church.” Chief Justice John Roberts, writing for the majority, said preventing religious schools from gaining access to “public benefits” on the basis of religion is “odious to our Constitution … and cannot stand.”

Additionally, in Town of Greece v. Galloway (2014), the Supreme Court ruled that “ceremonial prayer” included in government activities, including legislative assemblies, is permissible and not a violation of the First Amendment. Rather, it is “a recognition that, since this Nation was founded and until the present day, many Americans deem that their own existence must be understood by precepts far beyond the authority of government to alter or define and that willing participation in civic affairs can be consistent with a brief acknowledgment of their belief in a higher power, always with due respect for those who adhere to other beliefs.”

These cases illustrate the Supreme Court is now firmly committed to protecting many kinds of public religious expression, including symbols and monuments like the “Peace Cross” – even when government is involved. And in the wake of President Trump’s recent appointments of Justices Neil Gorsuch and Brett Kavanaugh, both of whom have promised to protect Americans’ religious liberties, it seems extremely unlikely the left will gain any ground in the near future in its effort to remove religious expression from all government-related activities.

There is still room for improvement, however. Although the Supreme Court has repeatedly defended public religious symbols and numerous kinds of speech, it has yet to adopt the position that the Constitution nowhere allows government to use the Constitution’s First Amendment to restrict all kinds of religious expression, an error that has permitted governments to abuse their power.

Although the federal government’s First Amendment – which is now considered to apply to states as well – does prevent government from making laws “respecting an establishment of religion,” history clearly shows that the “establishment” referred to here does not have anything to do with religious speech or expression, but rather coercive action by the government against the citizenry. In other words, the Founding Fathers intended to stop the federal government from “establishing” an official religion or church or using its power to force people to adhere to specific religious beliefs or practices. They did not intend to silence religious expression.

As Justice Clarence Thomas noted, citing the late Justice Antonin Scalia in a concurring opinion included in the Peace Cross decision, “At the founding, ‘[t]he coercion that was a hallmark of historical establishments of religion was coercion of religious orthodoxy and of financial support by force of law and threat of penalty.’”

“In an action claiming an unconstitutional establishment of religion,” Thomas added, “the plaintiff must demonstrate that he was actually coerced by government conduct that shares the characteristics of an establishment as understood at the founding.”

Contrary to the frequent claims of some on the left, the First Amendment was never intended to prevent people from expressing their religious beliefs publicly, even while serving in government. In fact, some early presidents and members of Congress established national days of prayer and fasting, including George Washington and John Adams, and in the middle of the 19th century, 27 state constitutions still explicitly referenced God.

Liberals would have us believe that in America, religion should never mix with government, ignoring the reality that religion molds moral opinion, which in turn shapes policy. Our entire system of government is, in fact, rooted in Judeo-Christian principles, and no amount of pretending and wishful thinking on the part of leftists can change that.

That doesn’t mean, of course, we should have established government churches or mandatory church services or tithing. A truly free society doesn’t impose religious beliefs on its citizenry, but it also doesn’t forbid that citizenry from expressing its beliefs, either.

Thankfully, our court system is once again recognizing and protecting that principle.