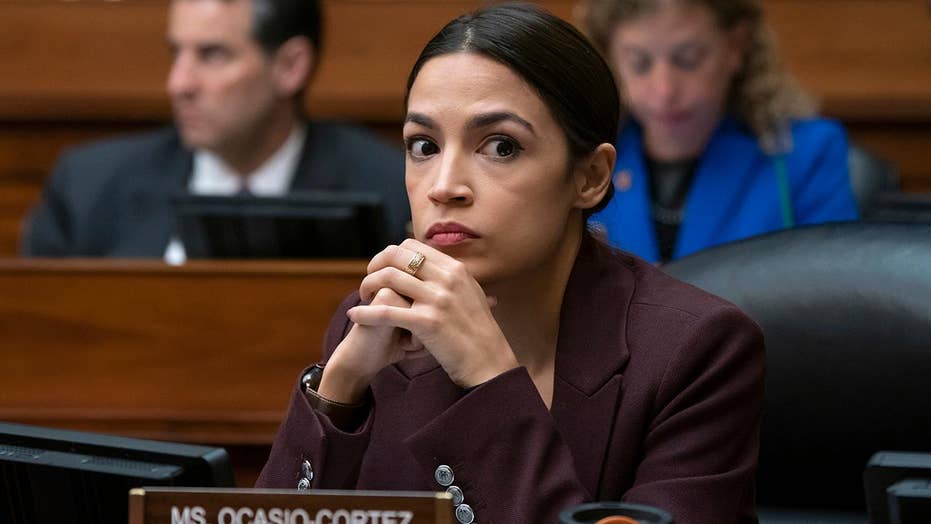 In the view of self-proclaimed democratic socialists like Rep. Alexandria Ocasio-Cortez, D-N.Y., and Democratic presidential hopeful Sen. Bernie Sanders, I-Vt., Big Government is never big enough. The problem is that government is too small, your taxes are too low, and government isn’t spending enough of your money on cradle-to-grave social programs.

The latest Big Government proposal from Ocasio-Cortez and Sanders calls for dramatically expanding the financial services provided by the U.S. Postal Service.

Under the plan, local post offices would provide the public access to financial services such as ATMs, paycheck-cashing, low-interest loans, savings and checking accounts, bill payment, electronic money transfers, and a few others.

OCASIO-CORTEZ, SANDERS WANT YOUR POST OFFICE TO DOUBLE AS A BANK

According to Ocasio-Cortez and Sanders, turning post offices into government-funded competitors of private sector banks is necessary to help low-income people get access to banking services.

In an article posted on Medium explaining the need for what would amount to socialized banking, Ocasio-Cortez and Sanders wrote: “Post offices exist in almost every community in our country. There are more than 31,000 retail post offices in this country. An important way to provide decent banking opportunities for low-income communities is to allow the U.S. Postal Service to engage in basic banking services.”

Hey, what could possibly go wrong with that?

Well, the inconvenient truth – pardon the expression – is that there is no reason to believe the federal government is capable of effectively providing anyone with banking services, nor is there a dire need for such a costly new system.

Like so many other proposals offered by Ocasio-Cortez and Sanders, their plan to provide financial services through the Postal Service is nothing more than a scheme to dramatically increase the size, power and influence of the federal government. This isn’t about improving the lives of low-income families.

And in the unlikely event that post offices become government banks, what would be the next steps favored by Ocasio-Cortez and Sanders? Expanding post offices to include homeless shelters? Food pantries? Child-care centers? Medical clinics?

Granted, these ideas sound ridiculous. But they make as much sense – and follow the same logic – as the idea of using post offices for any task other than the important one they were created to perform: delivering the mail.

Like so many other proposals offered by Ocasio-Cortez and Sanders, their plan to provide financial services through the Postal Service is nothing more than a scheme to dramatically increase the size, power and influence of the federal government.

Below are three reasons Americans should reject the socialized banking plan advanced by Comrade Alexandria and Comrade Bernie:

There is no national “unbanked” crisis.

In various articles written in support of the proposal by Ocasio-Cortez and Sanders to expand the Postal Service, left-wing pundits have falsely claimed there is a financial services access crisis facing low-income communities.

For example, in one article published by The Nation, correspondent John Nichols noted  that “according to a 2015 study by the Postal Service’s Office of the Inspector General, roughly 68 million Americans are underserved by the private banking system.”

But in reality, this claim is wildly misleading, because “underserved” has a very broad definition in the report. It does not mean people can’t utilize basic banking services like checking and savings accounts, as Nichols clearly implies. In fact, the overwhelming majority of Americans have access to these financial services.

According to the Federal Deposit Insurance Corporation, only “6.5 percent of U.S. households were unbanked, meaning that no one in the household had a checking or savings account.”

How can anyone say there is a banking crisis for low-income Americans when 93 percent of U.S. households currently have access to basic banking services?

Even more importantly, the FDIC notes that a survey it conducted found that only 4.9 percent of people who reported being without a checking or savings account in 2017 claimed the “main reason” was related to credit problems or problems with a previous bank account.

Another 8.6 percent listed “account fees too high” as the primary reason. That means more than eight in 10 Americans who don’t have checking or savings accounts have chosen not to have these accounts for reasons unrelated to the problems Ocasio-Cortez and Sanders say keep people away from banks.

By far the top reason cited for not opening a checking or savings account was “Do not have enough money to keep in account” – at 34 percent of survey respondents without such accounts. The second-most popular response by those surveyed was “Don’t trust banks,” at 12.6 percent.

Neither of these two groups – which together total nearly half of all those who don’t live in households with access to a savings or checking account – would be helped by Ocasio-Cortez and Sanders’ plan.

The Postal Service is failing miserably.

This may come as a shock to Ocasio-Cortez and Sanders, but governments around the world have a dismal record of providing services that have traditionally been provided by businesses in the private sector.

This is true in the U.S. in the same way it is true in communist and socialist nations – though fortunately, our government has never tried to replace the private sector, as governments have in some other nations.

While businesses like FedEx and UPS manage to make money competing with the Postal Service, the Postal Service is a financial basket case. Like virtually every other federal government agency, it is plagued by inefficient bureaucracy, waste and expenses it can’t afford.

The Postal Service reported it lost $3.9 billion in the 2018 fiscal year, in large part because of its high pension and salary expenses and its decline in volume.

About 3.2 billion fewer pieces of mail were delivered via the Postal Service in fiscal year 2018 compared to the previous year, due to Americans increasingly using the Internet and private delivery services to communicate with each other and pay bills.

If the Postal Service can’t manage to perform the functions it is currently responsible for, why would anyone trust it to take on new and very costly banking services?

The Postal Service should first be required to find a way to operate without losing billions of dollars before anyone even begins to consider expanding its services.

Even the Postal Service thinks offering banking services is a bad idea.

In the same Postal Service Office of Inspector General report cited by The Nation in support of turning post offices into banks, the OIG specifically stated that although the Postal Service could add some limited financial services, “The OIG is not recommending a post bank.”

The OIG then noted that although the “potential revenue from this approach could be significant … if the Postal Service were to succeed in becoming a bank, the risks, costs, and regulatory burdens that would come with it would pose tremendous challenges.”

The OIG added: “The uncertainties and downsides (of a post bank) make this approach less viable than other approaches, at least in the short term.”

Rather than wasting billions of dollars creating a “post bank” that few people need, states – not the federal government – should find ways to help the relatively small group of low-income people who can’t afford it to get basic services at existing banking institutions.

Think of it this way: the federal government created the Food Stamp Program (now called the Supplemental Nutrition Assistance Program) to help poor people afford food from their local private sector supermarkets and grocery stores. No one seriously considered creating thousands of government-run food stores and restaurants for people with low incomes.

There’s simply no reason to greatly expand the power of the national government by implementing Ocasio-Cortez and Sanders’ proposal – unless, of course, you are more interested in centralizing power than you are helping low-income families.

And if the main goal of Ocasio-Cortez and Sanders is to get publicity, there’s a simple way to do that as an alternative to socialized banking. The House member and the senator can sponsor legislation to put their names on post offices. At least that couldn’t hurt anyone.