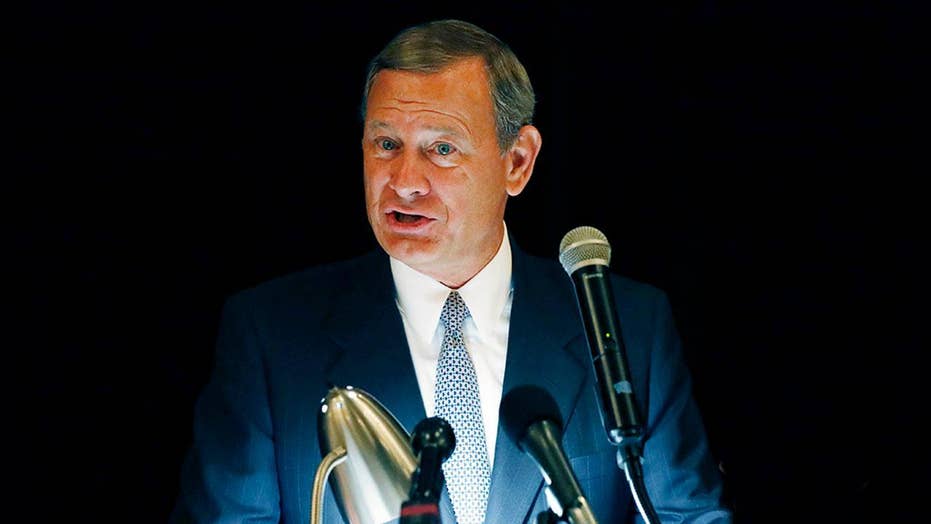 In a remarkably inappropriate and blatantly political statement Wednesday, U.S. Chief Justice John Roberts chastised President Trump for the president’s quite accurate criticism of the 9th U.S. Circuit Court of Appeals and its rogue district and appellate court judges.

The spectacle of the ostensibly nonpolitical chief justice engaged in a dispute with the president of the United States is insulting to the Supreme Court and to our system of justice.

Shame on the chief justice. What he did is unforgivable, especially after the corrosive Senate confirmation battle over now-Supreme Court Justice Brett Kavanaugh, who was the subject of bitter and baseless partisan attacks and character assassination by Senate Democrats.

With everyone looking for ways to remove the high court from the political thicket, Roberts strode arrogantly right into it. Sad day.

Roberts responded Wednesday to comments President Trump made to reporters a day earlier, after a district court judge appointed by President Obama issued an order to stop Trump’s new emergency restrictions on asylum claims by immigrants from taking effect.

U.S. District Judge Jon S. Tigar in San Francisco issued the nationwide injunction blocking the president’s restrictions. The restrictions would have made it harder for many of the thousands of Central American migrants now heading toward the U.S. border in caravans to apply for asylum in America.

“This was an Obama judge, and I'll tell you what, it's not going to happen like this anymore," the president said of Tigar. "Everybody that wants to sue the U.S. – almost – they file their case in the 9th Circuit, and it means an automatic loss. No matter what you do, no matter how good your case is. And the 9th Circuit is really something we have to take a look at, because it's not fair."

“We do not have Obama judges or Trump judges, Bush judges or Clinton judges,” Roberts shot back Wednesday, as if he were facing Trump in a presidential candidate debate. “What we have is an extraordinary group of dedicated judges doing their level best to do equal right to those appearing before them."

The spectacle of the ostensibly nonpolitical chief justice engaged in a dispute with the president of the United States is insulting to the Supreme Court and to our system of justice.

But President Trump’s criticism of liberal judges in the 9th Circuit who were nominated by President Obama was accurate. These judges previously issued an order blocking the president’s Travel Ban Executive Order that was designed to protect our country from terrorists crossing our borders. As President Trump correctly noted, the Supreme Court later overturned the ruling by the 9th U.S. Circuit Court of Appeals.

Roberts’ comments seemed particularly strange because he had never injected himself into a political debate before.

In fact, Roberts sat quietly through President Obama’s 2010 State of the Union Address when Obama sharply attacked Supreme Court justices sitting in the audience for their ruling in the Citizens United case, which allowed unlimited political campaign contributions by unions and corporations.

President Obama falsely claimed in this speech that the Citizens United ruling allowed massive political contributions by foreign corporations. It did no such thing.

As the justices sat in the House chamber listening to his speech, President Obama embarrassed the court directly and fiercely. Not a peep from Roberts. Only Justice Samuel Alito quietly mouthed to himself “no, no” as Obama railed against foreign campaign contributions.

Roberts has said nothing about Obama’s remarks in the eight years since.

So why did Roberts attack President Trump on Wednesday? Well, Trump is not a Democrat.

Many believe that Roberts caved to political criticism by President Obama and his Democratic cohorts in a case where Roberts was the decisive vote in a ruling that found ObamaCare was constitutional – a historic victory for Democrats.

Roberts clearly accepted the claim by Democrats in that case that the Supreme Court could not overturn ObamaCare or the high court would forever harm the republic and subvert the legislative process and the will of the people.

It is widely believed that Roberts changed his vote at the last minute to stop the Supreme Court from overturning ObamaCare in that landmark case because of pressure from outside forces directed against him.

Indeed, the wording of various dissents in the ObamaCare case – especially Justice Antonin Scalia’s – made it clear that Roberts’ decision to find that ObamaCare was constitutional was political and nothing more – not a decision based on the Constitution or on the law.

The ObamaCare ruling was a legacy opinion for Roberts because he couldn’t take another wave of criticism like what he received from the liberal media, Obama and the Democrats after his ruling in the Citizens United case. Roberts caved in an obvious nod to the attacks on him. It was palpable and most unfortunate.

Roberts’ ObamaCare opinion had a quality of “oh by the way” and artificiality to it that was apparent to Supreme Court observers.

So Roberts’ pro-Democratic bias that we saw Wednesday is nothing new. It is, in fact, a repetition and a return to normal for him.

The chief justice was institutionally the wrong person to make his point in criticizing President Trump. If the point was to be made at all, it should have been made by the usual suspects: the American Bar Association, any well-known and respected lawyer, or a prominent media commentator or newspaper editorial page.

The candidates for attacking President Trump are numerous and inoffensive. Perhaps Roberts could have chosen his favorite Democrat on the House Judiciary Committee. At any rate, he chose none of these options. One wonders why.

Why would Roberts insert himself, at this time, in this situation, to attack President Trump? He is a very smart man. This was not an accident or a coincidence.