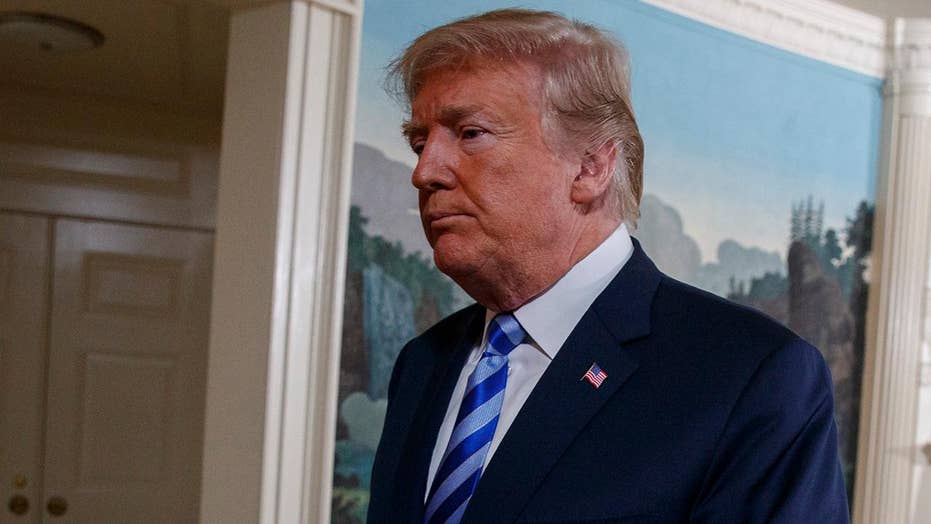 Trump withdraws US from Iran deal: What's next?

President Trump’s unilateral withdrawal from the Iranian nuclear deal has driven yet another wedge between Washington and its closest European allies – a longstanding goal of Iranian policy and a major gift to Russia.

The decision announced Tuesday by President Trump flouted public appeals from French President Emmanuel Macron, German Chancellor Angela Merkel and British Foreign Minister Boris Johnson. All of them came to Washington in recent days to plead with President Trump not to walk away from the Iran deal, known as the Joint Comprehensive Plan of Action (JCPOA).

The Europeans argued that abrogating the agreement threatens the solidarity of the North Atlantic Treaty Organization and a united front against Russia.

President Trump’s humiliating indifference to the views of Macron, Merkel and Johnson now threatens to weaken their governments at home and European support for the embattled NATO alliance.

Tuesday’s decision plays into Moscow’s aims by deepening Euro-American tensions and forcing Europeans to negotiate with Tehran on their own.

The U.S. president’s action, therefore, is a boon to Russia, whose twin strategic goal have long been to undermine the moral authority of the West and fracture the alliance aimed at containing Russian aggression and reassertion of its influence in Europe.

The decision is the latest and most dramatic step by President Trump that has pressured the alliance. Since his election, President Trump has repeatedly undermined NATO by bullying allies to pay more for their mutual defense, withdrawing from the Paris climate accord, and threatening a trade war with America absent major European concessions.

Tuesday’s decision plays into Moscow’s aims by deepening Euro-American tensions and forcing Europeans to negotiate with Tehran on their own.

President Trump made clear Tuesday that he intends to enforce so-called secondary sanctions – those on European companies that do business with Iran. That will force traditional allies to choose between siding with what many Europeans consider a rash, erratic American president and their own economic interests.

In his brief announcement explaining his decision, President Trump did not say that Iran was violating the nuclear deal that President Obama considered his crowing non-proliferation agreement.

Although White House National Security Adviser John Bolton argued after the announcement that Iran was violating portions of the agreement, President Trump did not make that argument, since several of his key national security advisers had testified on Capitol Hill that Iran was abiding by the agreement it signed in 2015.

Instead, President Trump reiterated his view that the accord was a “disaster” and fatally flawed because it does not constrain Iran’s development of long-range ballistic missiles capable of carrying nuclear warheads, does not require Iran to end its support for Hezbollah and other terrorist groups, and has ignored Iran’s destabilizing actions in Syria, Iraq, Yemen and throughout the Middle East.

This view was echoed in Saudi Arabia and Israel, both of which applauded what Israeli Prime Minister Benjamin Netanyahu called President’s Trump’s “historic” decision.

In a dramatic presentation last week, Netanyahu disclosed that the Mossad (Israel’s foreign intelligence service) had stolen 55,000 pages of Iranian nuclear documents and 183 CD’s from a warehouse in Tehran and flown them out of the country.

The documents showed that Iran had lied about not having had a nuclear weapons program on its initial declaration to the International Atomic Energy Agency, which is charged with monitoring Iran’s compliance with the nuclear agreement and its other non-proliferation obligations.

Though Netanyahu has long opposed the nuclear deal and staged his presentation to encourage President Trump to abandon the agreement, some non-proliferation experts urged the president to use the stolen Iranian material to try to strengthen the nuclear deal, rather than withdraw from it.

Specifically, several who opposed and supported the Iran deal (One of us, Miller, was a deal supporter, the other, Tobey, a skeptic) hoped that President Trump and his European allies might have taken the revelations of Iran’s past nuclear weapons activity to the joint commission established by the Iran deal to resolve compliance disputes.

We wanted the U.S. and European nations to demand more intrusive IAEA inspections in Iran, and to insist that the group investigate Iran’s initial misstatements about its nuclear program.

Such a move would have strengthened the IAEA’s mandate. And by showing that Iran had lied on its initial declarations, the U.S. could have used Iran’s lies to demand that it accept restraints on its ballistic missile work and more intrusive inspections, particularly at military sites.

These actions alone might have helped achieve what President Trump claims to want and substantially strengthened and enforced the Iran nuclear deal. They also would have corrected a serious flaw in the agreement – Iran was never required to account completely and correctly for its past work on a nuclear bomb.

But President Trump chose not to take this course, opting instead for reapplying “powerful” economic sanctions that Europeans are likely to resent and resist.

Iran’s President Hassan Rouhani, who promoted the nuclear deal against his government’s own hardliners, said that Iran would continue abiding by the agreement, but seek negotiations to preserve the accord and avoid sanctions with the deal’s European signatories, as well as with China and Russia. If those talks fail, he warned, Iran was prepared to resume enriching uranium at higher levels than ever before.

In ignoring Europe’s pleas and choosing instead to fulfill his campaign promise to undo President Obama’s signature arms control accord, President Trump, once again, is letting Moscow take the seat at the negotiating table that America is now abandoning. What, if any strategy, underlies such a move remains unclear.

William Tobey was deputy administrator for defense nuclear nonproliferation at the National Nuclear Security Administration from 2006 to 2009. He directs the U.S.-Russia Initiative to Prevent Nuclear Terrorism at Harvard’s Belfer Center for Science and International Affairs.