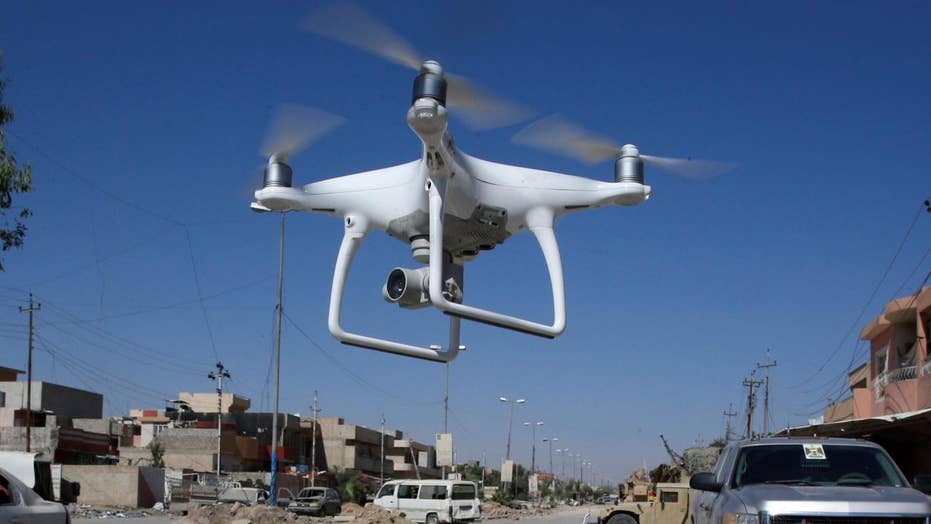 Inside the role drones have played in the war on terror

Brett Velicovich, former Delta intelligence analyst and author of the new book 'Drone Warrior,' on the hunt for ISIS terrorists in Iraq and Syria

In his first testimony before a Senate committee, FBI director Christopher A. Wray revealed that the bureau is now investigating 2,000 terrorism cases—an equal number of cases involving radical-Islamic-directed or inspired terror and cases of violence being planned or conducted by white supremacists or other racially motivated extremists. Wednesday’s testimony marks the first time that the FBI has divulged that it has about the same number of both types of cases. Wray also told Senator Ron Johnson, chairman of the Senate Homeland Security and Governmental Affairs Committee, that unlike radical Islamic terrorism, racially motivated domestic terrorism is not a specific crime. While federal law makes it illegal to provide “material support” to a foreign terrorist group, no corresponding law bans support for racially motivated violence.

“Probably the biggest difference is there’s not a domestic terrorism offense as such,” Wray said. Under questioning, he added that it would be “helpful” for the bureau to use foreign-intelligence court-ordered surveillance, known as FISA, to collect information about domestic terrorism, a tool permitted now only for investigations of foreign terrorism suspects. “We have a lot of tools,” Wray told the committee. “We can always use more.” The request will likely spark concern among civil libertarians, who have long warned about government surveillance of American political groups.

Wray issued a stark warning about the growing danger of drone and cyber terror. Terrorists want to use drones to drop grenade-sized explosives, toxins, or other harmful substances on Americans, just as they have done abroad. “We’ve seen that overseas already with growing frequency,” he said. “I think the expectation is that it’s coming here imminently.” Drones, he added, were “relatively easy to acquire, relatively easy to operate, and quite difficult to disrupt and monitor.”

Nicholas Rasmussen, director of the National Counterterrorism Center, agreed. “Two years ago this was not a problem,” he told the committee. “A year ago it was an emerging problem. Now it’s a real problem. So we’re quickly trying to up our game.” He also said that it was unclear which agency was in charge of countering this threat, a confusion that concerned several senators. Rasmussen said that while ISIS and al-Qaida had lost significant ground on the battlefield—three-quarters of the territory once held in Iraq and half of the self-declared “caliphate” in Syria—their global reach in terms of terror was “undiminished.”

Even the achievements that three senior officials cited came with warnings. Rasmussen said that the outflow of jihadists from the battlefields of Iraq and Syria to Europe and their other native lands was “not as large as anticipated”—but American officials are concerned about the skill sets of those returning home. Some battle-hardened jihadis had been trained in bomb-making; others had an impressive “rolodex”; still others had worrisome contacts in their home countries.

Wray told the committee that government information-sharing still had a “long way to go,” sparking frustration among several committee members. “We’ve been talking about this since the fires were burning in the Twin Towers,” complained Senator Claire McCaskill, Democrat of Missouri, the committee’s ranking Democrat. Another recurring concern was the admission by Wray, Rasmussen, and Elaine Duke, acting secretary of the Department of Homeland Security, that the U.S. government still doesn’t know the whereabouts of some of the 600,000 foreigners in the U.S. believed to have overstayed their visas. Rasmussen added to the gloomy assessment by noting that while there have been fewer jihadist attacks this year in the U.S. than in the past two years, the number of arrests of homegrown extremists has remained constant. Moreover, the officials conceded, while only three of the nearly 40 attacks in Europe since 2015 involved foreign terrorist fighters who had returned from Iraq and Syria, those attacks had caused over half of the total fatalities.

Wray also repeated his predecessor’s concern about the growing use of encryption by terrorists and cyber-criminals. In the first 10 months of this fiscal year, the FBI had been unable “to access the content of more than 6,000 mobile devices using appropriate and available technical tools,” though it had the legal authority to do so.

To continue reading this column from the City Journal, click here.