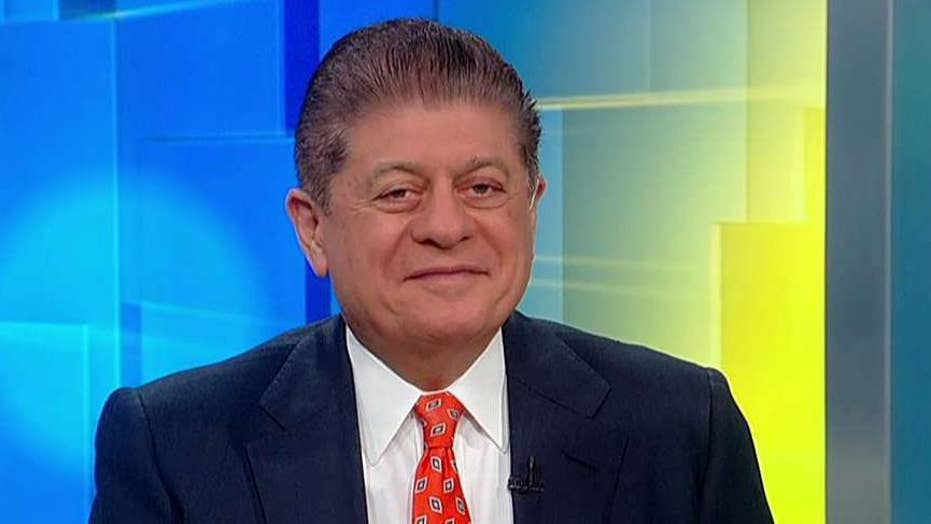 Napolitano: Trump wants a trial because he wants to be vindicated on merits, not politics

The rule of law is a cornerstone of American democracy and is integral to the Constitution. It stands for the principles that no person is beneath the laws' protections. No person is above the laws' requirements. And the laws apply equally to all people. That is the theory of the rule of law.

That immunity claim is predicated upon the belief that if the president committed a criminal offense and was charged and prosecuted while in office, the diversion of his energies to his defense would interfere substantially with his ability to do his job, which could jeopardize national security.

VARNEY: TRUMP WILL BE UNLEASHED AGAINST DEMOCRATS IN POST-IMPEACHMENT SPEECH

When the Department of Justice looked at the law of presidential prosecutions, it produced three scholarly reports during the Richard Nixon and Bill Clinton impeachment investigations. Two of those reports concluded that no president could be charged or prosecuted while in office.

Those two reports were relied upon by Attorney General William Barr when he brushed aside the findings of special counsel Robert Mueller, who found enough evidence to charge President Donald Trump with obstruction of justice after Trump repeatedly attempted to interfere with Mueller's investigation by ordering subordinates to lie to FBI investigators or to falsify government documents that investigators sought.

Barr did not address the merits of Mueller's findings. In Barr’s view, no matter what the president did -- even if anyone else who did the same would have been prosecuted -- the disruption to the government would not be worth the benefits of a presidential prosecution.

The third scholarly DOJ report concluded that the president is not above the law and that if sufficient evidence of presidential lawbreaking does exist, he ought to be charged. However, the prosecution should be deferred until he leaves office.

All three DOJ reports agreed that if the president's behavior, though uncharged, nevertheless amounted to "high crimes and misdemeanors," he should be impeached.

High crimes and misdemeanors is a basis for impeachment, the constitutional remedy for presidential behavior that subverts our democratic institutions. In Trump's case, we have undisputed evidence that he abused his power by inviting a foreign government to interfere in the 2020 presidential election and then compounded this by directing subordinates to refrain from giving congressionally commanded evidence of his behavior.

It is undisputed that Trump withheld the delivery of the $391 million in military aid to Ukraine that Congress authorized and ordered and that Trump himself signed into law. He said he withheld that aid because he first wanted "a favor" from the president of Ukraine.

The favor, requested by others on Trump's behalf, was the announcement of a Ukrainian government criminal investigation of Trump's potential political adversary, former Vice President Joe Biden. In the language of the streets, this is a shakedown; it sought to enhance Trump's personal political needs and bears no relationship to American foreign policy.

That presidential behavior implicates two crimes. One is the federal prohibition on soliciting campaign aid from a foreign government -- whether the aid arrives or not. It did not.

The other crime is bribery, which is the exploitation of public duties for personal gain. Bribery consists of the intentional refusal to perform a required public duty -- here, releasing the $391 million to Ukraine -- until a personal thing of value -- here, the announcement of the Ukrainian investigation of Biden -- arrives. The crime of bribery is complete when the thing of value is solicited, whether it arrives or not. It did not.

The other crimes implicated by Trump's behavior took place after he was accused of the first two. Then, he directed his subordinates to disregard congressional subpoenas, lawfully issued and validly served, which sought testimony, documents and electronic records of the president's behavior.

We know from the impeachment charges recommended by the House Judiciary Committee against Nixon and voted by the House of Representatives against Clinton that obstructing the constitutional duty of Congress is impeachable. We also know from the Roger Clemens case, in which he was prosecuted, and acquitted, for obstruction of Congress by allegedly lying to a House committee, that obstruction can be criminal.

Because Trump declined to participate in the House investigation that resulted in the construction of the articles of impeachment against him -- except for his tweets and bluster and the Republicans' personal attacks on House Democratic committee chairs -- the facts underlying the charges against Trump are essentially uncontested.

Everyone who believes in the rule of law should be terrified of a president who thinks and behaves as if it does not apply to him. As the DOJ has stated repeatedly, impeachment is the proper constitutional remedy for that.

James Madison, the author of the Constitution and the Bill of Rights, feared a government that was strong enough to protect the people would become too strong for the people to control. It would use its powers not for the nation's betterment but its own. When the government fails to control itself, he argued, when the president becomes a law unto himself by violating the laws that pertain to all others, the remedy is impeachment.

The framers' greatest fear was a president who would unlawfully put his own needs above the nation's or who would drag a foreign government into our domestic affairs. Trump has tried to do both and threatened to repeat those attempts. That's why the remedy of impeachment is acutely needed.