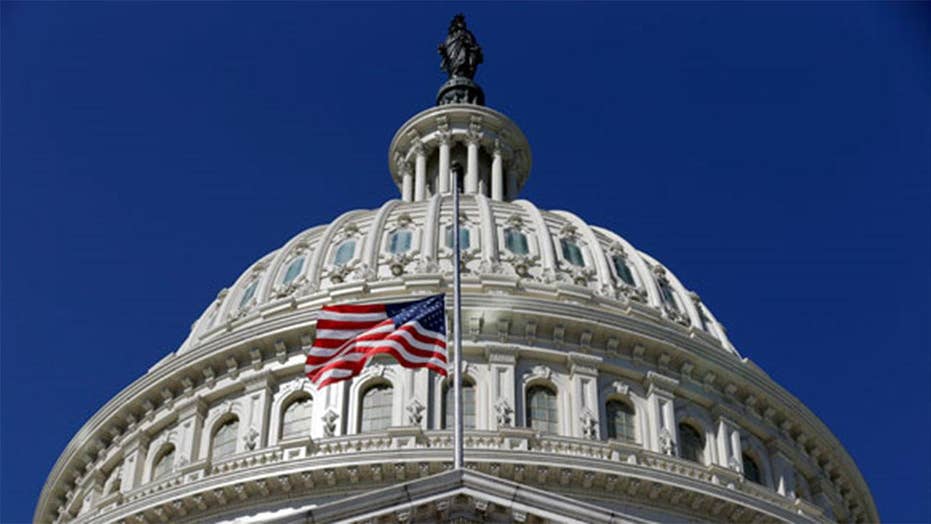 Toss-up states could alter balance of power in Senate

Tight polls in Senate races have Democrats feeling upbeat even as some in red-states navigate the Trump factor; Mike Emanuel has the details for 'Special Report.'

We’re taking all bets – put your money down now: Will Republicans hold their U.S. Senate majority after the Nov. 6 midterm elections? My bet is that they do. But the odds that I’m wrong keep going up.

Ever the master of the political expectations game, Senate Majority Leader Mitch McConnell, R-Ky., wouldn’t answer “yes” or “no” when asked this week if he thinks his party will hold the Senate come November.

Instead, McConnell said the midterms are going to be “very challenging” for his party and then added that Senate races have turned into “a knife fight in an alley!”

“It's just a brawl in every one of those places," McConnell said.

Even if McConnell is spinning to get bigger campaign contributions for his candidates, there is a real question here. Do the Democrats really do have a shot at taking back control of the Senate when voters go to the polls?

It wasn’t that long ago when a Democratic takeover of the upper chamber seemed pie-in-the-sky unlikely. But with less than eight weeks to go before Election Day, things really do seem to be breaking the Democrats’ way.

How did we get here? The Democrats, after all, are still defending 24 seats – including 10 in states that Donald Trump carried in 2016.

To my mind, the tide turned with the surprise victory of Democrat Doug Jones in the special election to fill the Senate seat from Alabama formerly held by Republican Jeff Sessions, who is now attorney general. Republicans now hold a 51-49 Senate majority because they lost that seat.

Moreover, the Jones victory re-energized a Democratic base still depressed over Trump’s victory in the 2016 presidential election. It also showed how a credible, moderate Democrat could overtake a flawed Republican candidate even in the reddest of red states.

Democratic senators once thought to be headed for political death are now somehow full of new life.

Indiana’s Joe Donnelly, West Virginia’s Joe Manchin, Montana’s Jon Tester, North Dakota’s Heidi Heitkamp and Missouri’s Claire McCaskill are all polling ahead or within the margin of error of their Republican opponents, according to the latest Real Clear Politics averages.

At this juncture, what once seemed like a sure thing has turned into a question mark. That means the GOP is spending time, money and resources in places once thought to require no attention to win.

In short, the GOP is now playing defense rather than offense to protect its incumbents. Republicans are defending a president with historically low approval ratings and combatting the daily drip-drip-drip of negative headlines about him.

The negative headlines deal with stories about hush-money payments to women who claim they had affairs with Trump (claims he denies); guilty verdicts against former Trump advisers investigated by Special Counsel Robert Mueller; and best-selling books accusing the president of corruption, having a limited intellect, and suffering from mental instability. President Trump has repeatedly denied wrongdoing and attacked negative books about his presidency as fiction.

The Democrats need to pick up only two seats to win control of the Senate. Here are four races where they could do it:

Bredesen is focusing on his own moderate, center-right record as governor and vowing to work in a bipartisan manner in the best interests of his state. He is avoiding mentioning President Trump.

By contrast, Blackburn has become Trump’s most outspoken female supporter in Congress. She is a frequent guest on cable news shows, talk radio and conservative media. The fact that she has not been able to pull ahead of Bredesen in a state that Trump won by 26 points has Republicans nervous, for good reason.

Texas is the biggest surprise on the midterm horizon. And it is forcing establishment Republicans in Washington to hold their noses and try to save one of their party’s biggest in-house headaches – Sen. Ted Cruz.

Sen. Lindsey Graham, R-S.C., once famously remarked if you killed Cruz on the floor of the Senate and had a trial with only his fellow senators serving as jurors, nobody would vote to convict his killer.

During the 2016 Republican presidential primaries, Trump branded Cruz “Lyin’ Ted” and suggested the senator’s father could have been involved in the assassination of President John F. Kennedy.

But Cruz has remained a supporter and reliable vote for President Trump in the Senate. His Democratic opponent in his re-election race – U.S. Rep. Beto O’Rourke of El Paso – is getting a ton of national media exposure and reported an impressive fundraising haul earlier this month.

Texas Sen. John Cornyn told Politico that Cruz is in a tight race, explaining that “we’re not bluffing, this is real, and it is a serious threat.” Real Clear Politics shows Cruz leading O’Rourke by just three points in polling.

Republican Sen. Dean Heller is running for re-election in a state that went for Hillary Clinton and elected a Democratic Latina to the U.S. Senate in 2016.

Heller tries to portray himself as a moderate on immigration issues. But his association with President Trump and the party of “build the wall” is doing him no favors in a state with a 28 percent Hispanic population.

Heller’s opponent – popular Democratic U.S. Rep. Jacky Rosen – is leading by one point according to a Suffolk University poll last week. The political machine of former Senate Majority Leader Harry Reid, D-Nev., and the strong political influence of unionized workers in Las Vegas and Reno will make it very difficult for Heller to hold on.

Trump carried Arizona by less than four points in 2016, down from the nine-point margin of victory for Republican Mitt Romney over President Obama in 2012. This is a seat now held by Republican Sen. Jeff Flake – a stand-out GOP critic of Trump – who is retiring from Congress to avoid having to run as a critic of his party’s troubled leader.

For two years, the question in Washington has been: “What will it take for Republicans to turn on Donald Trump?”

If Republicans lose control of the U.S. Senate because of the president’s political toxicity – even in reliably red states – that could do it.