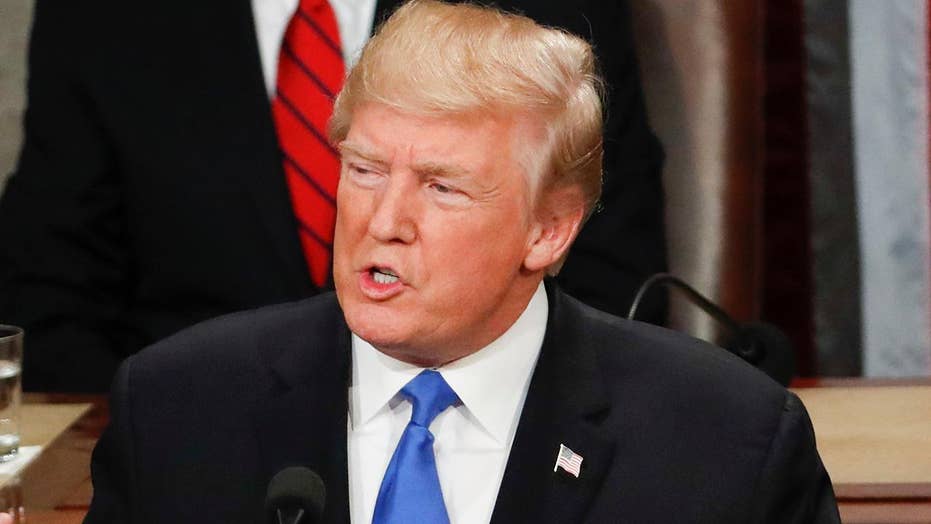 William La Jeunesse reports on the president's remarks on the issue.

Is there any way to help President Trump climb down from his pledge to build a “great, beautiful” wall on the Mexican border?

Last week, Trump remained high on his pledge during his State of the Union speech.

The fabled promise to build the wall is now blocking the president from making an immigration deal with Democrats — a deal that is needed in order to prevent a government shutdown on Friday.

Any agreement to keep the government open depends on allowing the president to save face as he falls away from the wall.

There are two big questions at play:

Firstly, how much money do the Democrats have to give the president in the name of border security to get him to climb down?

Secondly, will right-wing talk radio allow him to make an immigration deal with the Democrats if he shifts to talking about a "virtual" wall?

The first to offer the president a helping hand off the ledge was White House Chief of Staff John Kelly.

The only “big beautiful wall” being constructed these days is the barrier between reality and the mindset of Trump supporters.

Kelly reportedly told members of the Congressional Hispanic Caucus in January not to worry about the wall because “a 50-foot wall from sea to shining sea isn’t what we’re going to build.”

The next day, Kelly explained to my Fox News colleague Bret Baier that he was simply pointing out to the Hispanic Caucus that all politicians “say things during the course of campaigns that may or may not be fully informed.”

Trump didn’t take kindly to that. So he tweeted: “The Wall is the Wall, it has never changed or evolved from the day I conceived of it.”

The president did come down a little bit, however. He conceded in his tweets that part of the wall may be “see through,” adding that he does not intend to build a wall across “mountains, wastelands or tough rivers.”

Then another offer to help the president off the wall came from the Department of Homeland Security. They reported last month that 2017 saw the lowest level of border-crossing arrests since 1971.

That fits with other statistics from federal officials that could give Trump a helping hand. They offered him numbers showing that during President Obama’s second term, net migration from Mexico fell below zero. That means more people were exiting the U.S. to go south than entering from the south.

The government also reported a sharp increase in fencing on the border. Between 2005 and 2017, the U.S. increased 135 miles of fencing and barriers to 653 miles of fencing. Even better, during the Bush and Obama administrations, spending on border patrols went from $1.1 billion to $3.8 billion.

In addition, federal records show more immigrants are in the U.S. illegally because they overstayed their visas than because they illegally crossed the southwestern border.

Trump can fudge the timeline and brag to his supporters that all this happened due to his hard rhetoric — and without a real wall.

If he takes that path down, Trump will find a very broad political safety net open to soften his fall.

The president’s fellow Republicans in the Senate are also sticking out helping hands.

With the growing influence of Hispanic voters in southwestern states like Arizona, where Sen. Jeff Flake is retiring and Sen. John McCain is in poor health, Republicans are hesitant to embrace the label of the “party of the wall.”

In Nevada, Sen. Dean Heller — arguably the most vulnerable Republican senator up for re-election this year — is no fan of the wall.

Heller can see that Democrats are targeting his state and congressional districts where the Latino population has increased in recent years. A wall will not help Republicans hold those seats.

Former Ariz. Gov. Janet Napolitano (D), who also served as Obama’s Homeland Security secretary, gave the Democrats a good line for political advertising in the southwest when she famously said, regarding a border wall: “Show me a 50-foot wall and I'll show you a 51-foot ladder.”

Another problem for Republicans is that much of the land along the U.S.-Mexico border is privately owned, meaning the Trump administration would have to assert sweeping new eminent domain powers to seize the land and build the wall on it.

This kind of unprecedented government land grab would tie the government up in years of costly litigation as landowners fight back in the courts.

And then there is the fact that Trump is not getting help to pay for the wall from Mexico.

Whenever Trump says that Mexico will eventually pay for the wall, former Mexican President Vincente Fox tweets back: “We are not paying for that stupid f-in wall.”

At this point, the wall is at best a majestic symbol in the culture wars and a wedge issue for Trump’s GOP.

It is not a viable policy and thus it does not belong in a serious policy debate over immigration and funding the federal government.

The only “big beautiful wall” being constructed these days is the barrier between reality and the mindset of Trump supporters.

Who among them will help Trump avoid a crashing fall?

This article originally appeared in The Hill.