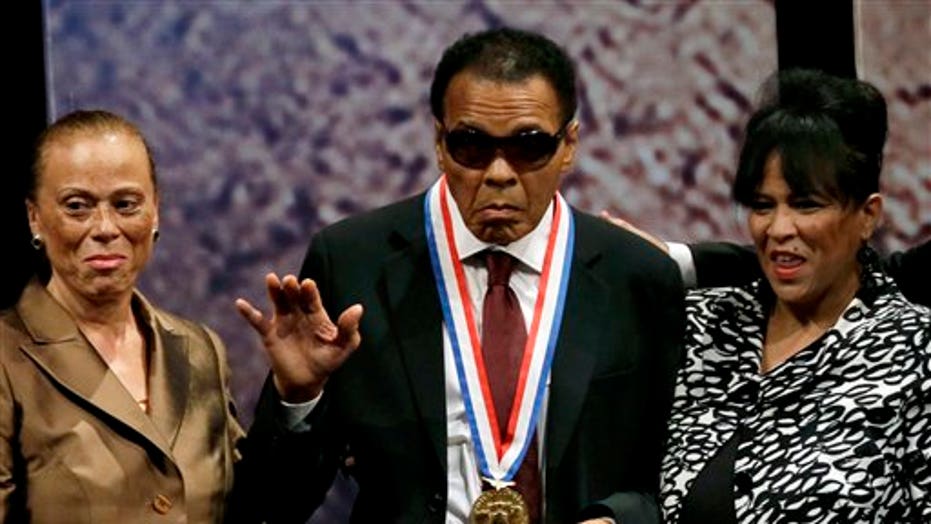 Juan Williams reflects on his conversations with Ali

Muhammad Ali and I had just walked into an ESPN awards event in Los Angeles when the R&B singer R. Kelly saw him and began singing a personal tribute to Ali.

Ali stood there with a tremble, already suffering from Parkinson’s that also made his speech halting.

Other famous athletes and entertainers suddenly began gathering around as Kelly continued to sing, “There are miracles in life I must achieve –but first I know it starts inside of me.”

I’ve been around presidents from Reagan to Obama to Mandela but I never saw anything like that before or after.

Yes, Ali was the greatest. He was the most famous person of the 20th century.

That includes being a polarizing figure for his refusal to enter the U.S. military as well as his decision to join the Nation of Islam and change his name from Cassius Clay to Muhammad Ali.

It all started with the fact that he was the greatest boxer of the 20th Century. To see him in the ring was astounding. Here was a powerful heavyweight, over 200 pounds and 6-foot-2, who moved with a ballet dancer’s grace and bounced off his toes with elegance.

Yes, he won Olympic gold at 18 and a heavyweight championship at 22. But that was only the start of what made him such an unforgettable figure to the world.

At a time when most athletes had nothing to say about politics, religion and social movements, Ali was outspoken on all fronts.

When he refused to join the Army he became a hero to opponents of the Vietnam War. The fact that an athlete was sacrificing the prime of his career and millions in riches to take a principled stand elevated the boxer to another level.

“I didn’t dodge the draft,” Ali told me when I interviewed him in December 2001. “I just avoided it. The Vietnam War turned out wrong, and the war was wrong. It was terrible. The boys shouldn’t have been there. So I made the right decision. After all, I’m still the winner.”

Ali’s willingness to speak out about racial injustice also made him controversial and again larger than life. Sports heroes of all races but especially black champions such as Jesse Owens, Joe Louis and Jackie Robinson always kept a low profile on the explosive issues of segregation and racial discrimination.

Ali defiantly aligned himself with Malcolm X and the most radical even terrifying challenges to white political dominance.

His challenge even extended to the culture when he began describing himself as ‘pretty.’

That thrilled black America in the 1960s when it was still a political act to say ‘Black is Beautiful.’ Black identity was being redefined in that moment and Ali made himself into a transformative cultural figure.

Ali’s power went far beyond black America. He went on TV shows and traded political views with expert conversationalists such as the talk show host Dick Cavett and the sportscaster Howard Cosell.

Some critics said Ali had a low IQ but that sounded like a baseless insult with a racial overtone when Ali could be seen sparring with brilliant white men.

And through it all he said his heroes were ordinary people and called himself ‘the People’s Champion.'

Ali said that when he went into the ring to fight it was “not for me, but to uplift my little brothers who are sleeping on concrete floors…I want to win my title and walk down the alleys, sit on the garbage can with the wineheads … the dope addicts, talk to the prostitutes, so I can help a lot of the people.”

That attitude combined with his athletic greatness and charisma attracted celebrities from every field to Ali, again elevating him beyond the sport of boxing. The Beatles went to visit him at his Miami gym. He posed knocking out all four at once. At one fight in Miami he had the soul singer Sam Cooke in his corner as well as Malcolm X and Sugar Ray Robinson, arguably the second best boxer of the 20th Century.

He ridiculed opponents, famously belittling Joe Frazier as an Uncle Tom and an ignoramus. But with Frazier and his other opponents, Ali’s stature made boxing matches into sensational international events. Fighters from Larry Holmes to George Foreman and Frazier became famous for fighting Ali.

Leon Spinks became renowned in 1979 when he defeated Ali, ending Ali’s third reign as heavyweight champion and leading to his retirement.

At that moment I wrote in the Washington Post that Ali, even in retirement, remained my hero.

“He was pure joy…He was jazz—a child of the universe who had learned to fight because some bully stole his bike,” I wrote in the Post. “I had a bike and I had trouble with bullies, too.”

So when Ali was chosen to carry the torch and light the Olympic flame to start the Olympic Games in Atlanta in 1996, I was brought to tears. The defiant outsider, the kid who was the target of bullies, the underdog who had his license taken away by his government was being celebrated by people of all races around the world. Even in his diminished condition suffering from Parkinson’s and long gone from the boxing ring, he remained a hero.

That’s why R. Kelly’s song of tribute to Ali brought so many people over to him behind the scenes away from the cameras. In that moment there were superstars of many different fields from sports to politics celebrating a super nova, Muhammad Ali.