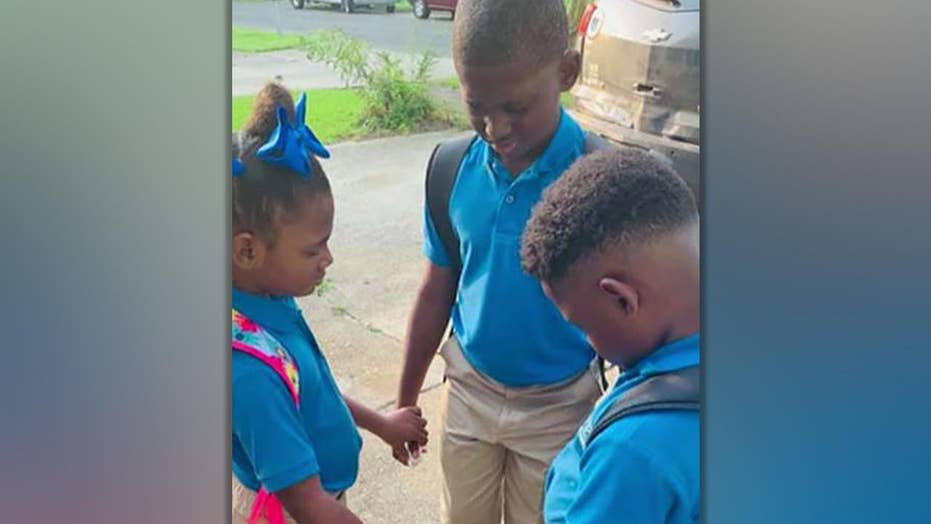 A photo of 3 Louisiana siblings praying on the first day of school goes viral after it is revealed that their parents lost their jobs and apartment.

The sky was dark outside of Petal Middle School because of a torrential rainstorm that was bearing down on our small town. All of the students were rushing to avoid the rain – all of them except me.

I stopped by the gutter where water was gushing over the edges, put my head under the waterfall, drenched my hair, and then slicked it back. I thought it was hilarious. My English teacher did not.

When I walked into class, my teacher saw my soaking wet hair and loudly ordered me to get out of the room. I walked across the hallway and looked down at the floor as the sickening feeling of adrenaline rushed through my veins, up my neck, and into my stomach.

JOSHUA ROGERS: MY AWFUL REALIZATION AFTER HONKING AT THE DRIVER IN FRONT OF ME

"Joshua Rogers!" she yelled and then began unloading breathtaking adjectives at a rapid-fire pace: "foolish," "irritating," "unbearable." My heart was sinking as I felt embarrassed by the fact that my classmates could overhear her.

Then she said something that I didn't understand at the time, but I knew it was somehow a horrible indictment of me: "Joshua, there's a book called 'How to Win Friends and Influence People,' and you are failing on every single point!"

I stood there in a daze, trying to swallow the lump in my throat. It physically felt as if the words had gone straight into my chest. I was hurt and disoriented. I had always wanted her to like me but suddenly, there in the hallway, I realized something: I wasn't likable at all.

That wasn't the only time my view of myself was shaken when I was growing up. I was on the receiving end of plenty of ridicule, getting called "queer," having my clothes made fun of, and dealing with the jocks who ridiculed the fact that I was in the school choir. I eventually began to see myself as an outsider, the bad kid, believing something was inherently wrong with me.

Some people walk through experiences like that early on and never make a comeback. They take on the mantle of rejection and grow comfortable under the cold, wet, heaviness of it. I have not done that, and there's one reason why: During those hard years of adolescence, there were people who came along and helped me heal.

God sent people like my youth pastor, Kevin Cooper, who made me feel cool even though I felt like an oddball. There was my middle school friend Erin Myers, who hung out with me even though I would've rather been singing than throwing a football. There were also teachers like Margaret Kendrick who didn't let me get away with my shenanigans but treated me like I was a family member.

Kevin, Erin, and Ms. Kendrick all did their part in counteracting the sting of reckless words that were spoken over me. They loved me one little encouragement at a time, offering an unforgettable impression of the kindness of Jesus, helping me see that in a world of broken people, God's love still has the power to heal.

Be like one of those healers God sent to me. Ask God, "Who needs to be encouraged in a way that undoes some of the damage that life has sent their way?" And don't worry about Him "sending" anyone who needs to be loved. They're sitting right next to you. You're one of those people.

Without divine intervention through people showing us God's love, we'll stay in those sixth-grade hallways in our hearts, carrying so much shame along with us. But we weren't made by God for that. Like our bodies that can suffer great injury, we all need to be healed, but we can't do it on our own. Set up the counseling appointment, ask someone how they're really doing, call that friend, ask a safe person for help. Be willing to give and receive the restoration we all need.